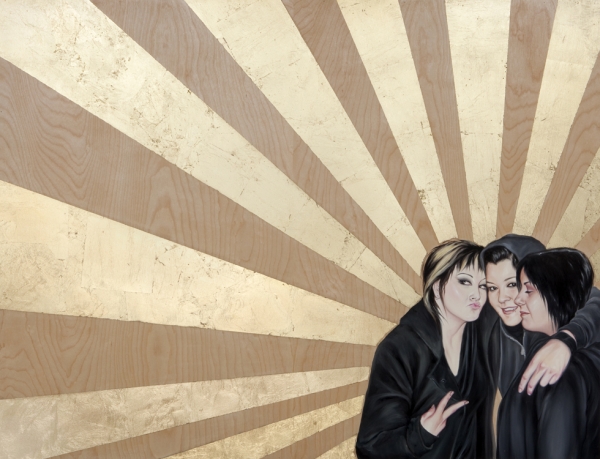 Shizu Saldamando (born 1978) depicts how American social spaces are the laboratories for new ways of being. Her portraits playfully suggest that race, gender, and ethnicity act as white noise to the scene at hand; audible, yet not identifiable. Saldamando’s visual biographies, which use friends as her subjects, capture the energy of youthful experimentation and the freedom of malleable categories for identity.

Born to parents of Japanese and Mexican descent, Saldamando resides in Los Angeles but grew up in San Francisco. She attended the University of California, Los Angeles, for her undergraduate work and received an MFA from the California Institute of the Arts.

About arriving in Los Angeles, she says: “Growing up in the Mission district in San Francisco, it was predominately a hip-hop culture. Here in Los Angeles, I’d go to shows or house parties, and it would be all Latino kids listening to the Cure and the Smiths. In L.A., I felt normal for the first time.” Saldamando’s meticulous collaged paintings offer the viewer a subtlety of influences to ponder.

My work is an investigation into different social constructs and subcultures seen through backyard parties, dance clubs, music shows, hang-out spots, and art receptions. By exploring subculture through personal narrative and employing an eclectic mix of materials, I hope to disarm fixed hierarchical social and artistic constructs.

I am interested in documenting mundane social moments as a way to glorify everyday people who are often overlooked, yet whose existence is the embodiment and legacy of historical struggle. We are all interested in the process of creating and re-contextualizing culture by virtue of language, dress, and memory.

Visual signifiers drawing from fashion and place are constantly in flux, fluid in meaning yet rich in historical context. For this reason I gravitate towards portraiture as practice and process. Rather than depicting moments of cultural “diaspora,” I lean towards the idea of fragmentation within the self as being more of an evolving, fluid, and never-ending process.

Listen to an Interview with Shizu Saldamando