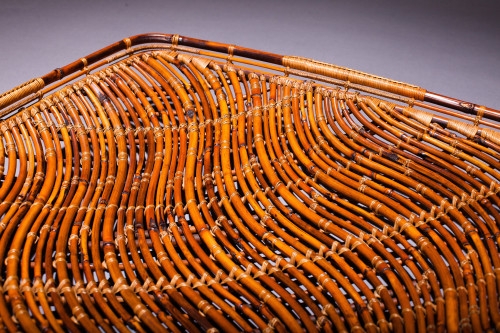 This presentation by Modern Twist guest curator Dr. Andreas Marks will look into the historical development of bamboo art in Japan. It will also provide an overview of the leading artists in the early 20th century that were instrumental for establishing sculptural works as today’s second main pillar of Japanese bamboo art. Light bites will be provided. 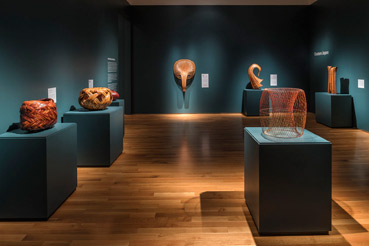 "The exhibition offers an antidote [to stress], full of intriguing objects that ask nothing more than to be admired for their beauty and human ingenuity." — Houston Chronicle

See Modern Twist before it closes on July 30!

Originally from China, bamboo baskets have been made in Japan since the 8th century, when they were used to hold flowers during Buddhist rituals. In the 9th century, bamboo objects became intimately connected with Japan’s two forms of ceremonial tea presentation — chanoyu and senchadō. Since flower arrangements in bamboo containers played a role in both traditions, baskets imported from China became popular. During the 19th century Japanese bamboo artists were predominantly engaged in reproducing the most complex forms for a demanding market.

Bamboo works remained predominantly utilitarian in nature until the mid-20th century, when a small number of artists began to experiment with nonfunctional, sculptural forms. Since then, bamboo artists have proven to be highly creative by challenging the conventions of basketry and pushing their medium to new conceptual and technical limits. Artistic forms emerged in the mid-20th century that influenced “traditional” baskets, transforming them from functional vessels to increasingly sculptural objects.

Innovative sculptures by 16 bamboo artists are on display in Modern Twist, and attendees to this lecture are invited to take a FREE look at the exhibition on the day of the program. The exhibition at Asia Society runs through July 30, 2017.

Bamboo is characterized by strength, flexibility, and lightness—bending, not breaking, with strong winds, while enduring harsh winters. This exhibition explores the innovative shape bamboo art has taken in Japan since the mid-twentieth century. Featuring a selection of works from 16 Japanese artists, including rare wall-hung installations and works never before seen in Houston, Modern Twist both engages and educates audiences about a vibrant cultural art form.

About the Guest Curator 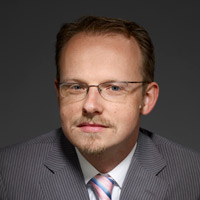 Dr. Andreas Marks is the Head of the Japanese and Korean Art Department at the Minneapolis Institute of Art. From 2008 to 2013 he was the Director and Chief Curator of the Clark Center for Japanese Art and Culture in California. He has a Ph.D. from Leiden University in the Netherlands and a master’s degree in East Asian Art History from the University of Bonn. A specialist of Japanese woodblock prints, he is the author of twelve books. His Publishers of Japanese Prints: A Compendium, is the first comprehensive reference work in any language on Japanese print publishers. In 2014 he received an award from the International Ukiyo‐e Society in Japan for his research. He has curated exhibitions in a variety of media from pre‐modern to contemporary art and visual culture at 25 museums including the Birmingham Museum of Art, Detroit Institute of Arts, Honolulu Museum of Art, and the San Antonio Museum of Art. His most recent exhibitions at the Minneapolis Institute of Art, Seven Masters: 20th‐Century Japanese Woodblock Prints from the Wells Collection and Gifts of Japanese and Korean Art from the Mary Griggs Burke Collection, were reviewed in the Wall Street Journal. His new book, Hiroshige & Eisen: The 69 Stations along the Kisokaido, will be published in July, followed by Hard Bodies: Contemporary Japanese Lacquer Sculpture in October.

Modern Twist: Contemporary Japanese Bamboo Art is guest-curated by Dr. Andreas Marks, of Minneapolis Institute of Arts, Collection of the Clark Center, and organized by International Arts and Artists, Washington, D.C. The touring exhibition is generously supported by the E. Rhodes & Leona B. Carpenter Foundation and the Nomura Foundation.

This exhibition at Asia Society Texas Center is made possible through the support of presenting sponsor, Nancy C. Allen. Major support also comes from Chinhui Juhn and Eddie Allen, The Brown Foundation, Inc., Leslie and Brad Bucher, and the City of Houston through Houston Arts Alliance, and Houston Endowment, Inc. Generous funding also provided by The Clayton Fund, Kathy and Glen Gondo, Ann Wales, and through contributions from the Friends of Exhibitions, a premier group of individuals and organizations committed to bringing exceptional visual art to Asia Society Texas Center.