Beyond Sacred: Voices of Muslim Identity 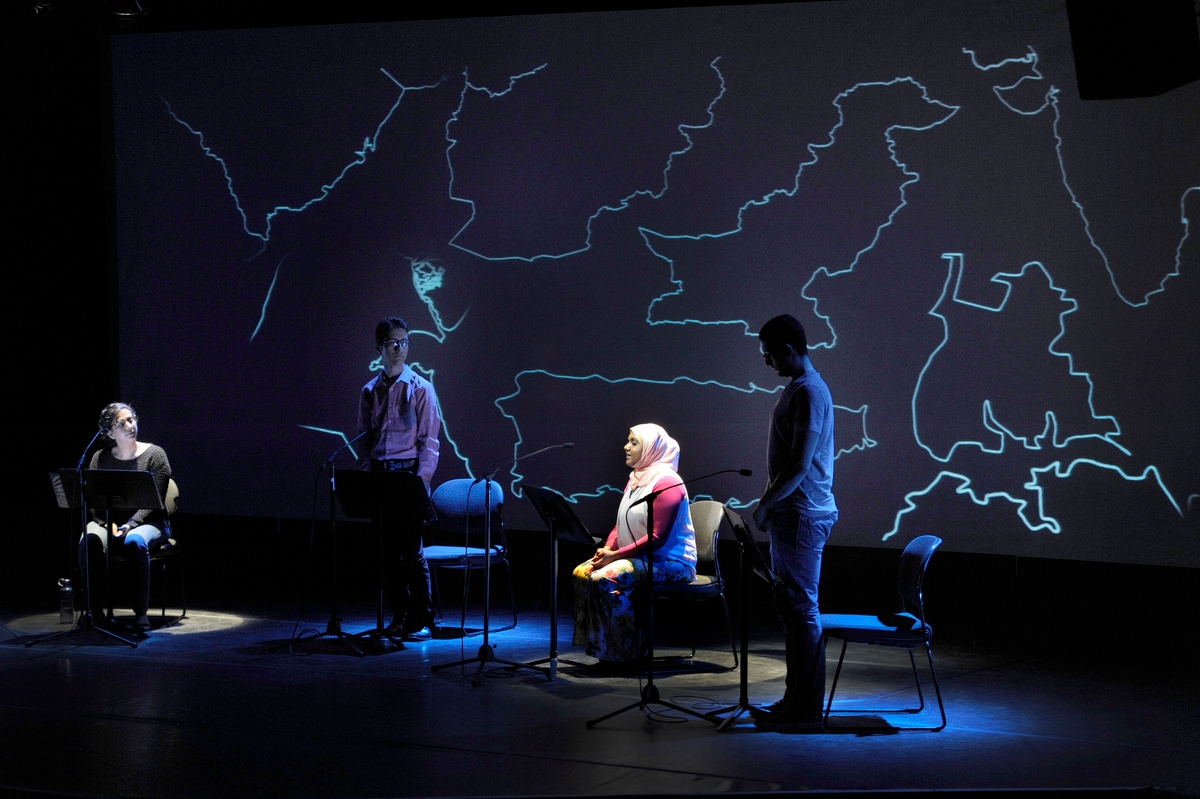 Beyond Sacred: Voices of Muslim Identity illuminates the daily experiences of five young Muslim Americans who came of age in a post-9/11 society, and who are building their lives in a time of continued fear of and violence towards Muslims. The cast members are from different cultural and ethnic backgrounds and reflect a wide range of Muslim identities, including those who have converted to Islam, those who were raised Muslim but have since left the faith, those who identify as "culturally" Muslim, and those who are observant on a daily basis.

"A beautiful, funny, and intensely poignant cry for tolerance" (Santa Barbara Independent), Beyond Sacred supports greater dialogues and understanding among and between Muslim and non-Muslim communities.

Beyond Sacred was developed through a community engaged process as part of Ping Chong + Company's Undesirable Elements series. Celebrating its 25-year anniversary in 2017-2018, Undesirable Elements is an ongoing series of oral history theater works exploring the effects of history, culture, and ethnicity on the lives of individuals in a community. The series is community specific and is made through a collaborative interview and workshop process, including an extended residency and rehearsal period during which Ping Chong and collaborators conduct intensive interviews with potential participants, who then become the performers, sharing their true stories with audiences. Their interviews form the basis of a script that weaves together the historical and personal narratives of individuals who are in some way living between two cultures. Incorporating theatre, dance, song, and projection, Undesirable Elements is a moving testimonial to the unexpected connections that can unite seemingly different people.

"Beyond Sacred addresses a topic that feels very much of the moment. [...] A sense of being marginalized for being Muslim unites the stories here. But Beyond Sacred is an exercise in empathy, not polemics: a lesson in human understanding, drawn from real lives." — The New York Times

Beyond Sacred Documentary Short from LPAContheMAP on Vimeo.

Ping Chong + Company produces theatrical works addressing the important cultural and civic issues of our times, striving to reach the widest audiences with the greatest level of artistic innovation and social integrity. The company was founded in 1975 by leading theatrical innovator Ping Chong with a mission to create works of theater and art that explore the intersections of race, culture, history, art, media, and technology in the modern world. Today, Ping Chong + Company produces original works by a close-knit ensemble of affiliated artists, under the artistic leadership of Ping Chong. Productions range from intimate oral history projects to grand-scale cinematic multidisciplinary productions featuring puppets, performers, and full music and production scores. The art reveals beauty, precision, and a commitment to social justice. www.pingchong.org

Tiffany Yasmin Hosein, 29, was raised in Florida and Georgia, and is of Trinidadian descent. After receiving her Associate's Degree from LaGuardia Community College in Queens, New York, she is now pursuing her BA in Theater Studies at Eugene Lang College, The New School University.

Kadin Herring, 25, is originally from South Carolina and is of Trinidadian and African American descent. He is a visual storyteller and cultural curator in New York.

Amir Khafagy, 26, is originally from Jackson Heights, Queens, and is of Puerto Rican and Egyptian heritage. He is currently pursuing his Masters degree in Urban Studies at Queens College.

Maha Syed, 31, is Pakistani-American. She was raised internationally, living in over a dozen countries throughout her childhood. She is a Master of International Affairs (MIA), Human Rights, Gender Policy, South Asia from Columbia University, and is currently Executive Director at New York Legal Services Coalition.

The Must List: Nuit Blanche Houston, 'Beyond Sacred: Voices of Muslim Identity'
Best Bets This Weekend in Houston

Performing Arts programs at Asia Society Texas Center are presented by Mickey Rosenau and Ellen Gritz. Major support comes from Nancy C. Allen and Mary Lawrence Porter, as well as The Brown Foundation, Inc., Houston Endowment, and the City of Houston through Houston Arts Alliance. Generous funding also provided by AARP, The Clayton Fund, Miller Theatre Advisory Board, New England Foundation for the Arts, Schlumberger, Wortham Foundation, Inc., Texas Commission on the Arts, and National Endowment for the Arts. Additional funding is provided through contributions from the Friends of Asia Society, a dedicated group of individuals and organizations committed to bringing exceptional programming and exhibitions to Asia Society Texas Center.

"Beyond Sacred" was commissioned by LaGuardia Performing Arts Center, where it premiered in April 2015. The premiere production was made possible by a grant from the Association of Performing Arts Professionals Building Bridges: Campus Community Engagement Grants Program, which is funded by the Doris Duke Charitable Foundation for Islamic Art.