Time-Honored Musical Traditions of Iran and Syria Infused with Contemporary Vibe in Sound: The Encounter 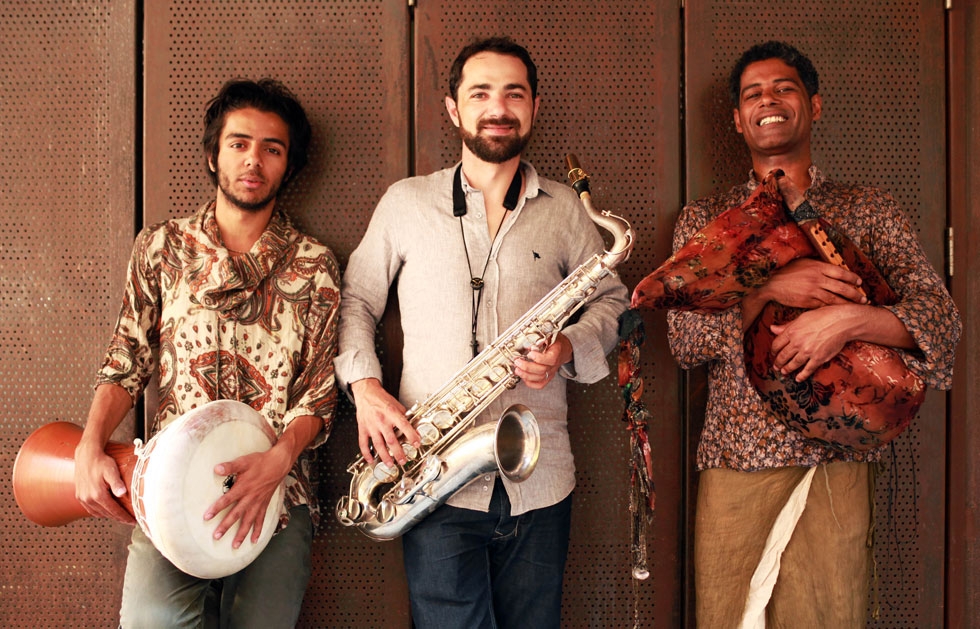 HOUSTON, November 25, 2013 — In association with Asia Society New York and the Aga Khan Council, Asia Society Texas Center’s Crossroads Asia series continues with Sound: The Encounter, an evening of Iranian and Syrian music ingrained in traditional legacies of the ancient Silk Route—reimagined with a contemporary twist. Just in time for the holidays, the ensemble will take to the Brown Foundation Performing Arts Theater stage on December 14 at 7:30 pm in what promises to be a dazzling musical journey inspired by Central Asian folk music.

“Here we are, three artists—with three different mindsets,” muses Saeid Shanbehzadeh. “We have to try to understand what we can do together with our musical knowledge. We don’t have to restrict ourselves to playing Iranian or Syrian music.”

What they have created, they simply call “music.”

It’s what artists have done for hundreds of years—shaken off the mantle of their ancestors, combining their known and learned musical ways and traditions with those of friends and collaborators from different parts of the world. The quartet of musicians hailing from Iran and Syria describe their music as a conversation, one that draws from their combined musical backgrounds and includes modern jazz influences, groovy percussion beats, and filigree ornamentation of the wind instruments and vocals. Bouts of improvisation and an unrestricted take on performing traditional folk music bring the conversation to life for the artists and audience members alike.

“We didn’t go the easy way of just playing jazz solos on saxophone in the middle of this music,” states Rajoub. “Because we have this folk music ‘stored’ inside, when you improvise, you’re improvising in the way known in folk tradition. So I started to add Oriental baselines with the saxophone. Sometimes I play the melody, which is really folk, with the microtones and all of the things that do not exist on the saxophone.”

Additionally, a free lecture demonstration on Sunday, December 15, at 3:00 pm at the Ismaili Jamatkjana and Center in Sugar Land, Texas, will give fans the unique opportunity to meet with the artists themselves and gain a more in-depth understanding of the music behind Sound: The Encounter.

This concert is presented in collaboration with the Aga Khan Music Initiative, a program of the Aga Khan Trust for Culture, which is very pleased to welcome the Aga Khan Music Initiative to Houston and in particular to welcome the musicians from Iran and Syria who bring a fresh perspective to the traditional music of their lands. Music and musicians have historically played a vital role in the cultures of the Middle East, serving not only as entertainment but as a way to reinforce social and moral values and strengthen the bonds of community through festivity and celebration. While steeped in their own traditions, musicians Saeid Shanbehzadeh, Basel Rajoub, and Naghib Shanbehzadeh are not bound by them but draw upon a myriad of other cultural influences in their compositions and display their instrumental mastery.

The Aga Khan Music Initiative was launched in 2000 by His Highness the Aga Khan to support talented musicians and music educators who are striving to preserve, transmit, and further develop their musical heritage in contemporary forms. The Initiative is an inter-regional music and arts education program with worldwide performance, outreach, mentoring, and artistic production activities. Music Initiative began its work in Central Asia, subsequently expanding its cultural development activities to include artistic communities and audiences in the Middle East, North Africa, and South Asia. The Initiative designs and implements a country-specific set of activities for each country into which it invests and works to promote revitalization of cultural heritage both as a source of livelihood for musicians and as a means to strengthen pluralism in nations where it is challenged by social, political, and economic constraints.

From Iran and Syria all the way to Houston, Texas, the music of Sound: The Encounter transcends global—and musical—borders, culminating in a richly blended and delightfully unique musical celebration. Experience the conversation for yourself this holiday season at the Asia Society Texas Center.