HOUSTON, April 20, 2022 – In partnership with the George H. W. Bush Foundation for U.S.–China Relations, Asia Society Texas hosted a webcast discussing international relations and how Hong Kong and Taiwan would factor into future U.S. policy toward China. Moderator David Firestein, inaugural president and CEO of the Bush China Foundation, spoke in conversation with Elizabeth Freund Larus, President of E Larus Consulting LLC and Professor Emeritus of Political Science at the University of Mary Washington; Hans Stockton, Dean of the Division of Social and Behavioral Sciences & Global Studies at the University of St. Thomas; and Rick Waters, Deputy Assistant Secretary of State for China, Taiwan, and Mongolia in the Bureau of East Asia and Pacific Affairs. The discussion touched on the current U.S. policy toward Hong Kong and Taiwan, how developments in Hong Kong and Ukraine have impacted sentiment in Taiwan regarding mainland China, and the future of the U.S.–China relationship.

Overview of current U.S. policy toward Hong Kong and Taiwan

Deputy Assistant Secretary Waters began by providing an overview of the overall U.S. policy toward Taiwan and Hong Kong, clarifying that the U.S.–Taiwan relationship is guided by the Taiwan Relations Act, the Three Joint Communiques, and the Six Assurances. The U.S. goal is to maintain a stable environment that would “allow dialogue to take place free of coercion.” Regarding Hong Kong, DAS Waters noted that U.S. policy is guided by the Hong Kong Policy Act, which was the basis of policy since British handover in 1999 and outlined differentiated treatment of Hong Kong and mainland China. However, he said the passing of the 2020 national security law in Hong Kong showed that Hong Kong no longer had enough sufficiency from Beijing to merit differentiated treatment. He cited diminished freedoms, increased rule of law risks, shrinking civil society, and increasing restrictions on rights and freedoms in Hong Kong as a result of the law.

Larus added that these concerns have impacted how American businesses view Hong Kong, and in combination with the city’s strict COVID quarantine policies at the beginning of the pandemic, has led to nearly 25 percent of Americans in the city considering leaving city. She expected that the combined issues will lead to more foreign — including U.S. — companies leaving Hong Kong, particularly with the bipartisan political focus in the U.S. on the national security risk of supply chains that rely on unfriendly nations.

Taiwan’s response to developments in Hong Kong and Ukraine

Stockton added that the passage of the national security law in Hong Kong also signaled an end of the “one country, two systems” era, and also reinforced for citizens of Taiwan that such a policy is not an option. He pointed to the last Taiwanese presidential election in 2020, where the Democratic Progressive Party was lagging in the polls before the developments in Hong Kong buoyed incumbent president Tsai Ing-Wen’s campaign and her message of remaining independent from Beijing. Nevertheless, Stockton cautioned that while the Taiwanese population is skittish about reunification, the largest group of those polled favor the status quo — that is, a pragmatic relationship that includes engaging economically with mainland. Trade between Taiwan and mainland China was up 25 percent in 2021.

Even while Taiwanese citizens are increasingly identifying as Taiwanese over Chinese, according to Larus, reflecting a robust development of Taiwan nationalism and identity in recent years, she noted that authorities in Beijing consider the issue of Taiwan reunification as untouchable. “It wasn’t what the Taiwan people want; it’s what must happen,” she said of Beijing’s view.

However, the panelists did not think the chances of a cross-strait conflagration are particularly high — and in fact may have decreased in the wake of Russia’s invasion of Ukraine. Stockton noted that the Chinese, learning from Russia, may recalibrate any assumptions that mass firepower will lead to a quick victory and instead take additional time to consume intelligence. Larus added that Chinese President Xi Jinping is unlikely to do anything before the Party Congress in October, when he will begin his unprecedented third term, but after that she said it will make sense to assess the sentiment of cross-strait relations through the results of Taiwan’s upcoming elections.

Look toward the future of the U.S.–China relationship

In assessing the future of U.S.–China relations, Larus acknowledged that the relationship is likely to grow chillier amid growing anti-China sentiment in Congress. Stockton said the bellwether will be the final form of the America Competes Act and what the language within the legislation will signal. He also indicated there is an ongoing debate about whether U.S. policy toward Taiwan will remain one of “strategic ambiguity” or evolve into one of “strategic clarity.” Finally, Stockton noted that the nature of the China–Russia relationship will also influence U.S. policy toward China.

Deputy Assistant Secretary Waters remained more optimistic about the opportunity for collaboration with China — whether on North Korea, climate change, or Afghanistan — and said, “When our interests align, we simply find we will do things together.” For instance, he said, the U.S. government is still issuing visas for Chinese students because interchange remains critical for the U.S.–China bilateral relationship, as well as for the U.S.’s own interests. Nevertheless, he underlined the importance of building at home and strengthening relationships with key allies and partners. 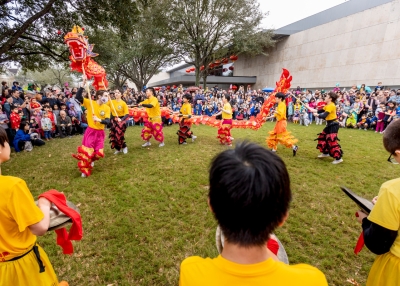 A record 4,000 guests celebrated the Year of the Rabbit and the Cat at Asia Society Texas' annual festival, enjoying activities, performances, food, and storytimes inspired by Lunar New Year traditions across Asia. 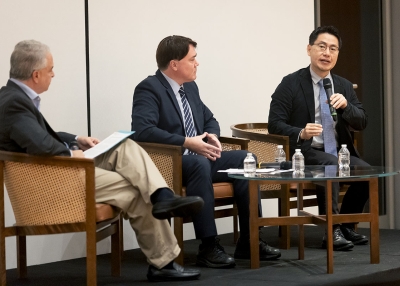 In partnership with the Council of Korean Americans, Asia Society Texas hosted a panel discussion on the future of the U.S.–China relationship, and the role that the Korean Peninsula will play in that relationship.