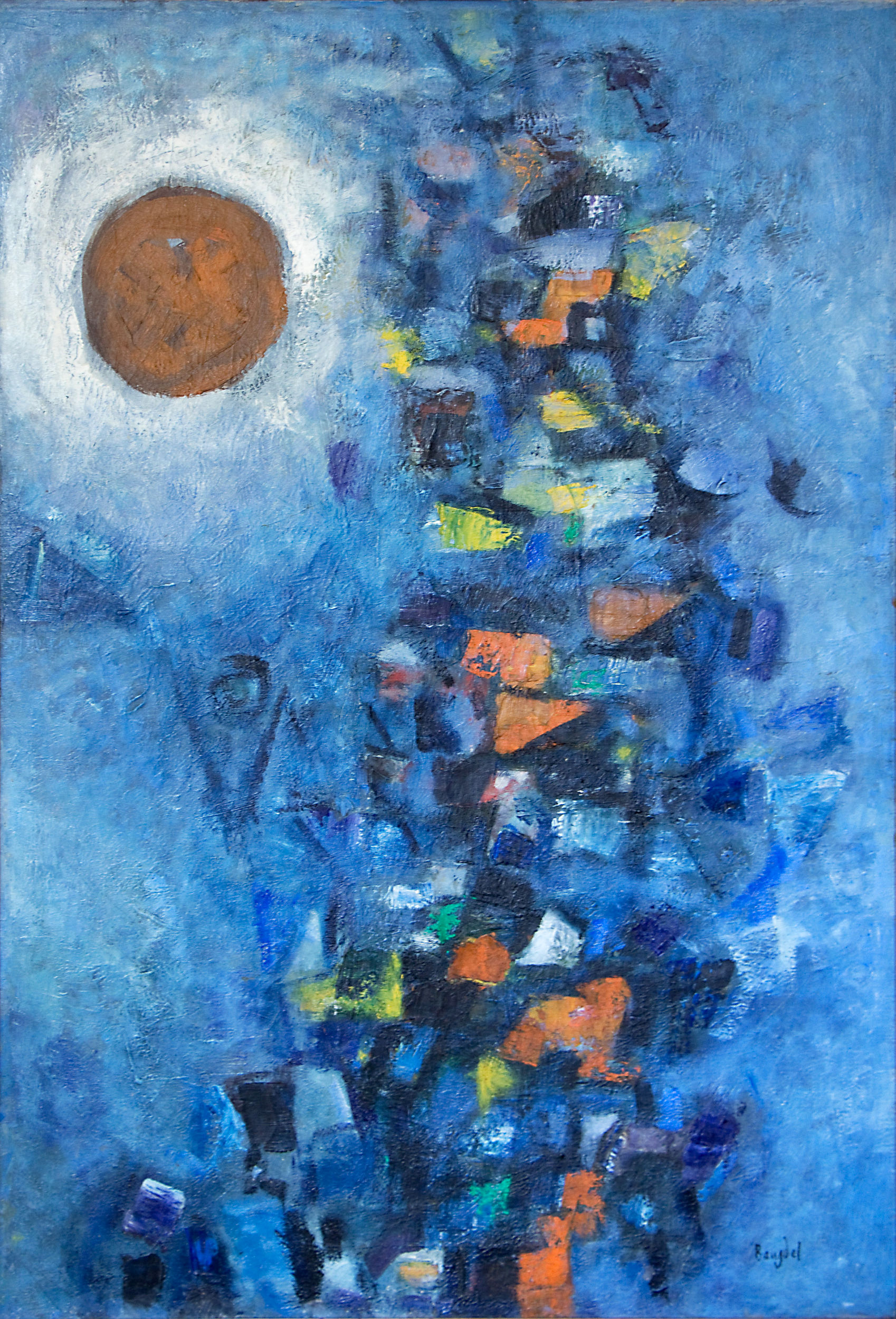 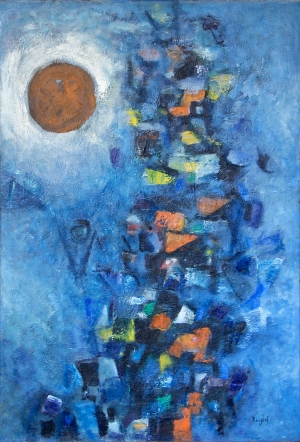 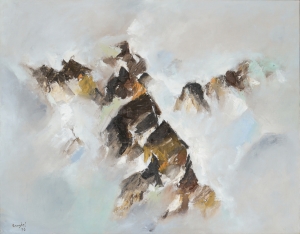 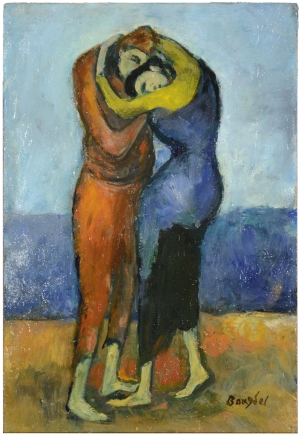 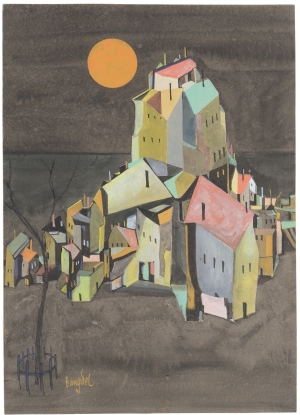 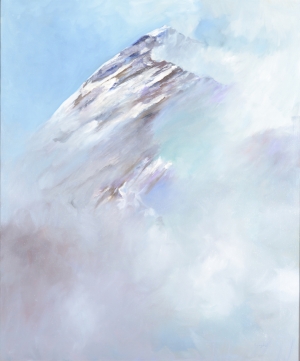 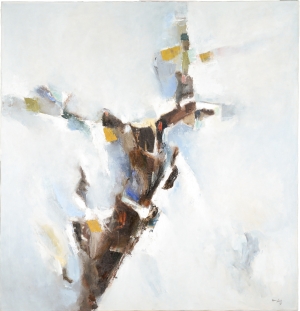 Lain Singh Bangdel: Moon Over Kathmandu brings to life many of the notable contributions of Nepal’s preeminent modern artist, Lain Singh Bangdel (1919-2002). A 20th-century polymath, Bangdel became an acclaimed novelist, art historian, preservationist, academician, and painter who played a pivotal role in shaping the history of art in South Asia. Moon Over Kathmandu assembles approximately 20 of Bangdel’s paintings to chart the artist’s pioneering pursuit of abstraction that would help define a modern Nepal. Born to a family of migrant workers on a tea plantation in Darjeeling, India, Bangdel explores a sense of home, longing, and loss through his work.

Admission for this exhibition is free.

An artist, writer, and art historian, the late Lain Singh Bangdel is a distinguished figure in the fields of art, literature, and culture in South Asia. He is often referred to as the "father of modern art" in Nepal due to his support for international modernism in the country.

Bangdel was born in 1919 in Darjeeling, India, to a family from Eastern Nepal. After spending his youth in a modest Himalayan village, he earned a degree in Fine Arts from the Government College of Art and Craft in Kolkata (formerly Calcutta), graduating at the top of his class in 1945. To further his studies, he went to Paris in 1952, studying at the French National School of Fine Arts (l’École Nationale Supérieure des Beaux-Arts). The early 1950s were a critical time for him in Paris professionally, where he met and developed close friendships with other international artists including Paritosh Sen and Akbar Padamsee from India, Affandi from Indonesia, and Soshana Afroyim from Austria. In Paris, Bangdel also met many other renowned artists like Georges Braque and Pablo Picasso, figures that had a significant impact during his formative artistic years.

Bangdel was the first Nepali artist to study and work in Paris and London, embracing international modern painting styles that included expressionism, abstraction, and cubism. After establishing his career in Europe in the 1950s, Bangdel was invited to become a member of the Royal Nepal Academy in 1960 by King Mahendra to pursue his professional career as an artist in Nepal. As a writer, he introduced a realistic writing style that marked a turning point in Nepali literature in the early 1950s. His three most popular novels are Muluk Bahira (1948), Maitighar (1950), and Langadako Sathi (1951). These novels quickly became required reading at the college and university levels in Nepal. As an art historian, Bangdel laid the foundation for the international study of Nepali art history, building a meticulous photographic inventory of visual art found across the Kathmandu Valley. Much of this work formed the basis of his book, Stolen Images of Nepal (1989), which alerted the world to the rapid loss of public art in Nepal. In recent years, this scholarship has led to the repatriation of several important art objects to Nepal.

HOUSTON, November 16, 2022 — Asia Society Texas (AST) announces its newest exhibition, Lain Singh Bangdel: Moon Over Kathmandu, featuring the abstract modernist work of polymath, novelist, art historian, preservationist, academician, and painter, Lain Singh Bangdel. Made up of approximately 20 works, the exhibition is the first solo show by a Nepali artist at any Asia Society site, and highlights Bangdel’s pioneering pursuit of abstraction that would help define a modern Nepal – shaping the history of art in South Asia. Lain Singh Bangdel: Moon Over Kathmandu is FREE and open to the public beginning Wednesday, November 30, 2022, through Sunday, April 30, 2023.

Born on a tea plantation in Darjeeling, India, into a community of Nepali migrant workers, Bangdel remained culturally connected to his homeland of Nepal until his first visit in 1961. The collection of works on view explores how his signature vocabulary of abstraction crystallized upon his homecoming to Nepal at the behest of King Mahendra and B.P. Koirala, the country’s first democratically elected prime minister. Informed by the architecture of South Asian cities like Kolkata and Kathmandu, as well as the exalted peaks of the ever-present Himalayas, Bangdel’s abstract paintings like Moon over Kathmandu (1962) and Abstract II (1969) advanced his belief in the sublime and rugged majesty of the world’s tallest mountain range. As such, the barrier that once separated Bangdel from Nepal became the subject that most connected him to his homeland, nourishing his artistic sensibility.

In the years leading up to his triumphant return to Nepal, Bangdel lived a remarkable life, embedding himself with intellectual circles in Independence-era Kolkata, London, and Paris. In 1939, he left the tea fields of Darjeeling to enroll in Kolkata’s noted Government College of Art & Craft. Here, Bangdel studied with Zainul Abedin, who would become one of Bangladesh’s foremost modern artists and an important documentarian of the Bengal Famine (1943-45), a cataclysmic event that would affect Bangdel’s art and writing for decades. After graduating, Bangdel found work as a commercial artist at the Kolkata-based firm D.J. Keymer, where he formed a lifelong friendship with acclaimed Indian filmmaker Satyajit Ray. During this period, Bangdel produced paintings of everyday life in Bengal, including Kolkata’s impoverished suburbs, and focused his attention on writing in Nepali, publishing several novels, and founding the literary journal Prabhat (Dawn).

In 1952, Bangdel left Kolkata to further his education and training in London and Paris. In connecting with the Asian diaspora’s artistic community, he hosted dinners in his Paris flat, where he engaged with the noted Indian modernists M.F. Husain, F.N. Souza, and Paritosh Sen. Eager to study the work of European modernists and old masters alike, Bangdel traveled extensively throughout Europe while publishing Nepali-language books and travelogues for audiences in his homeland. His experiments in abstract painting began in Europe, as seen in the exhibition’s cubist-inflected Transformation (1956), as well as Himalaya (1954), an ethereal imagining of Bangdel’s homeland. In 1961, after a formal request from King Mahendra, Bangdel and his wife left London for Nepal. The experience cemented his desire to, as Koirala implored him in a 1957 letter, “organize [Nepal’s] aesthetic movement.” This call to action would ultimately lead to his 1962 solo exhibition in Nepal, his first in the country. Moon Over Kathmandu thus brings to life the many notable contributions of Bangdel to the global history of modern art.

Exhibitions and their related programs at Asia Society Texas are presented by Nancy C. Allen, Chinhui Juhn and Eddie Allen, and Leslie and Brad Bucher. Major support comes from The Brown Foundation, Inc., Houston Endowment, and the City of Houston through Houston Arts Alliance. Generous funding also provided by The Anchorage Foundation of Texas, The Clayton Fund, Texas Commission on the Arts, National Endowment for the Arts, Wortham Foundation, Inc., Agnes Hsu-Tang, Ph.D. and Oscar L. Tang, and Ann Wales. United Airlines is our official airline partner. Funding is also provided through contributions from the Exhibitions Patron Circle, a dedicated group of individuals and organizations committed to bringing exceptional visual art to Asia Society Texas.