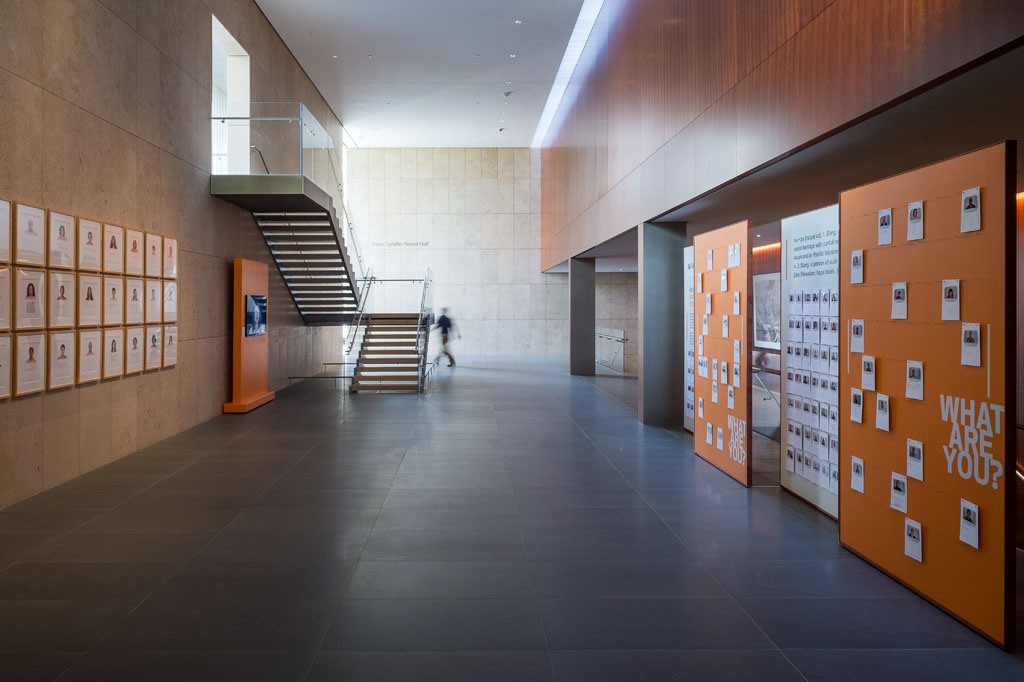 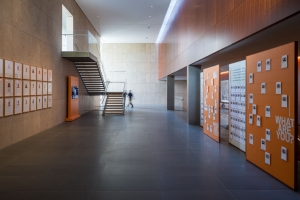 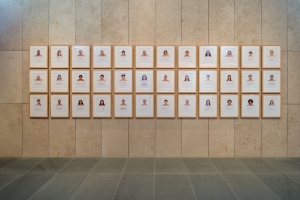 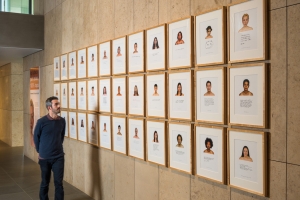 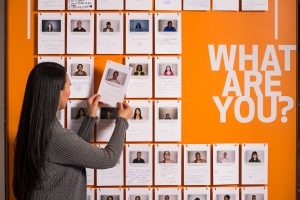 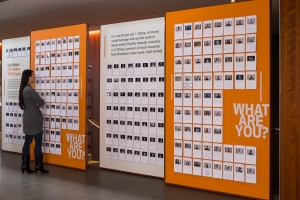 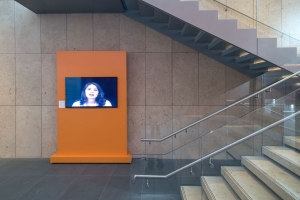 kip fulbeck: part asian, 100% hapa is an exhibition of portraits by award-winning filmmaker and artist Kip Fulbeck. Originally used as a derogatory label derived from the Hawaiian word for "half," hapa has since been embraced as a term of pride by many whose mixed-race heritage includes Asian or Pacific Rim ancestry.

Five years ago, Kip Fulbeck began traveling the country photographing over 1,000 multiracial individuals of all ages and walks of life. Fulbeck’s work seeks to address in words and images one question that hapa are frequently asked: “What are you?” The photographs are all taken in the same way—from the collarbone up, without clothing, jewelry, glasses, makeup, or even a smile—a deliberate play upon and critique of the official photographs everyone has taken for driver’s licenses, passports, and other forms of identification.

The portraits are paired with each participant’s response—in his or her own handwriting—to the question “What are you?” The sitters vary in age, gender, and background and the statements reflect their varied perspectives. These powerful yet intimate expressions of identity represent Fulbeck’s attempt to explore the complexity and the diversity of hapa individuals—who now number in the millions. This exhibition offers a complex perspective on an increasing reality of contemporary America.

Visitors become part of the show by adding their own images and personal statements of identity to an interactive display responding to the most common question asked of people of mixed-race backgrounds, "What are you?" From November 9, 2012 through April 14, 2013, Asia Society Texas Center staff and volunteers will be on hand to capture your image and your personal responses.

Selected photographs and comments will be included in the kip fulbeck: part asian, 100% hapa exhibition on display in the Fayez Sarofim Grand Hall, as well as added to 100% hapa: the digital exhibition and Asia Society Texas Center's social networks, including Facebook and Flickr.

I wrote a mission statement when I started this project. It talked about promoting awareness and recognition of hapa, dispelling myths of hybrid vigor and racial homogeneity, about fostering a positive self-image in multiracial children...

Three years and 1,100 portraits later, I don’t look at it in quite the same way. Of course I still believe in these goals, but in some ways the project feels almost not quite mine anymore. Yes, these are my photographs, my drawings, my design. But it’s the participants who are making the work bloom, who are carrying it on to places I never expected it to go. Every shoot I did and every shoot I do surprises me. And as the project continues to expand, the artwork has taken on a bit of its own life. There’s something really nice about that.

I’ve gotten some amazing responses to the project, and it’s been embraced more than I could have ever hoped for. I think what it comes down to is this: we all didn’t fit in at some point. We were all the kid with glasses, the fat kid, the poor kid, the kid who got picked last in P.E., the kid who was bad at math (or worse, the Asian kid who was bad at math). We all got put in a separate circle sometimes. The difference with being hapa—for me at least—was at the end of the day, I was still in a second circle outside that circle.

I’m 42 now. It’s a different time. The Chinatown I grew up in is no longer Cantonese. A Japanese gardener (if you can find one) is no longer a stereotype. My parent’s condo sits directly in between IKEA and Hooters. And being multiracial no longer means you have to pick one box only. That’s a good thing. There’s a long way to go, but it’s a start.

I hope viewers find some parallel to their lives in this show, that someone’s statement or gesture sparks some tinge of commonality somewhere. Race is a stupid concept, really. It’s biologically inaccurate. It gets us hung up on phenotype and political correctness. And in the end, it’s just another way for us humans to separate into tribes and fight with each other. This project isn’t about race. It’s about identity. I didn’t want to do a project about race because fitting into other people’s concepts and definitions of race—or more accurately not fitting in—is what started this whole ball rolling in the first place. I wanted to do a project about who we are, and what we are—in our own words, with our own definitions.

So, this is where we are. A couple dozen voices out of millions. It’s a start.

An FAQ with Kip Fulbeck

As an artist, why did you select photography for your project?

We constantly have to prove we really are who we say we are through the use of photographs—driver’s licenses, passports, gym memberships, etc. I wanted to play with this established method of identification, but twist it around by giving participants the power to pick their own images…to look like themselves, but I wanted them to have input on this as well. That’s why I included the handwritten statements.

What message do you hope visitors will walk away with after seeing your exhibition?

I’m most interested in celebration and reclamation—celebrating hapa awareness and identity…reclamation of invisibility, ignorance, pejorative labels, and, for lack of a better term—community homelessness. I’d like kids to realize they’re not alone. Maybe adults, too.

Excerpts from the article featured in the Summer 2012 issue of Member Magazine.

HOUSTON, TX (October 2012) — “What are you?” For Americans of mixed race, it is the seemingly inescapable question, asked by friends and strangers alike.

kip fulbeck: part asian, 100% hapa offers an array of answers in 36 photographs plus video of multiracial men and women together with their written thoughts on their ethnic identity. The exhibition, opening November 9, 2012, is one of two new shows this fall at Asia Society Texas Center.

Organized by the Japanese American National Museum in Los Angeles, the exhibition showcases the work of award-winning filmmaker and artist Kip Fulbeck, who traveled the country photographing mixed ancestry people of varying age, gender, and background for “The Hapa Project,” originally a web-hosted collection. Derived from the Hawaiian word for “half” and once considered derogatory, hapa has been embraced as a term of pride by many of mixed racial heritage with partial roots in Asian or Pacific Islander ancestry. The overwhelming response to The Hapa Project eventually led to a book, part asian · 100% hapa (Chronicle Books, 2006).

“part asian, 100% hapa is a celebration of who we are as individuals and as a society,” said Martha Blackwelder, Executive Director at Asia Society Texas Center. “This fascinating look at race and ethnicity will provide a forum for the exploration of Houston’s cultural landscape, reinforcing the diversity and multiculturalism that have made Houston a microcosm of the entire country.”

Visitors become part of the show by adding their own images and personal statements of identity to an interactive display, resulting in an exhibition that evolves constantly. Additional related programming will encourage a vibrant dialogue about how Houston communities define their place in the region and the world.

“We hope that by providing an opportunity to add to a tapestry of personal stories that transcend racial borderlines, visitors will gain a better understanding of the unique possibilities that come from living in multicolors and multicultures,” Blackwelder said.

kip fulbeck: part asian, 100% hapa will be on view in the Fayez Sarofim Grand Hall. Admission is free. It complements the Texas Center’s other exhibition opening this fall, Portraiture Now: Asian American Portraits of Encounter, which will be on display in the Louisa Stude Sarofim Gallery. Organized by the Smithsonian’s National Portrait Gallery and the Smithsonian Asian Pacific American Program, the show features stereotype-challenging portraiture by seven contemporary Asian and Asian American artists. Admission to the Portraiture Now show is free for Asia Society members, $5 for nonmembers. It, too, opens November 9, 2012. Both shows run through April 14, 2013.

kip fulbeck: part asian, 100% hapa is supported, in part, by the James Irvine Foundation. Local support for the exhibition is provided by the City of Houston and Houston Arts Alliance, Dorothy Carsey Sumner, Chinhui and Eddie Allen, Karen and John Bradshaw, Jereann Chaney, Judy and Scott Nyquist, and underwriting from other friends.

Kip Fulbeck has been making films and art about hapa identity since 1990. Known as the nation’s leading artist on the subject, he has spoken and exhibited his award-winning movies, performances, and photography throughout the world, including PBS, the Whitney Museum of American Art Biennial, Singapore International Film Festival, Locarno International Film Festival, Los Angeles County Museum of Art, Bonn Videonale, the National Conference On Race in Higher Education, and the Honolulu Contemporary Arts Museum. The director of the landmark video Banana Split and author of Paper Bullets: A Fictional Autobiography, Fulbeck is the inaugural recipient of the Hapa Issues Forum Prism Award for the Arts. Fulbeck is currently Professor and Chair of Art at the University of California, Santa Barbara, where he is a three-time recipient of the Outstanding Faculty Member Award and also an affiliate faculty member in Asian American Studies and Film Studies.

Described as a “photo album of the twenty-first-century global village,” Kip Fulbeck’s book of portraits part asian · 100% hapa (Chronicle Books, 2006), contains over 100 images of individuals who volunteered to have their faces photographed by Fulbeck for the Hapa Project and includes a foreword by Sean Lennon and an afterword by Paul Spickard.

Asia Society Texas Center is part of a leading global educational organization dedicated to promoting mutual understanding and strengthening partnerships among peoples, leaders, and institutions of Asia and the United States in a global context. Across the fields of arts, business, culture, education, and policy, Asia Society Texas Center provides insight, generates ideas, and promotes collaboration to connect Americans and Asians for a shared future.

The traveling exhibition kip fulbeck: part asian, 100% hapa is organized by the Japanese American National Museum in Los Angeles, California, and is supported, in part, by the James Irvine Foundation.

Thank you to the participants who participated in the project, selected photographs of whom are featured
in the exhibition