Avicenna to Modern Medicine: A Conversation with Muslim Doctors and Community Builders [SOLD OUT] | Asia Society Skip to main content

Avicenna to Modern Medicine: A Conversation with Muslim Doctors and Community Builders [SOLD OUT] 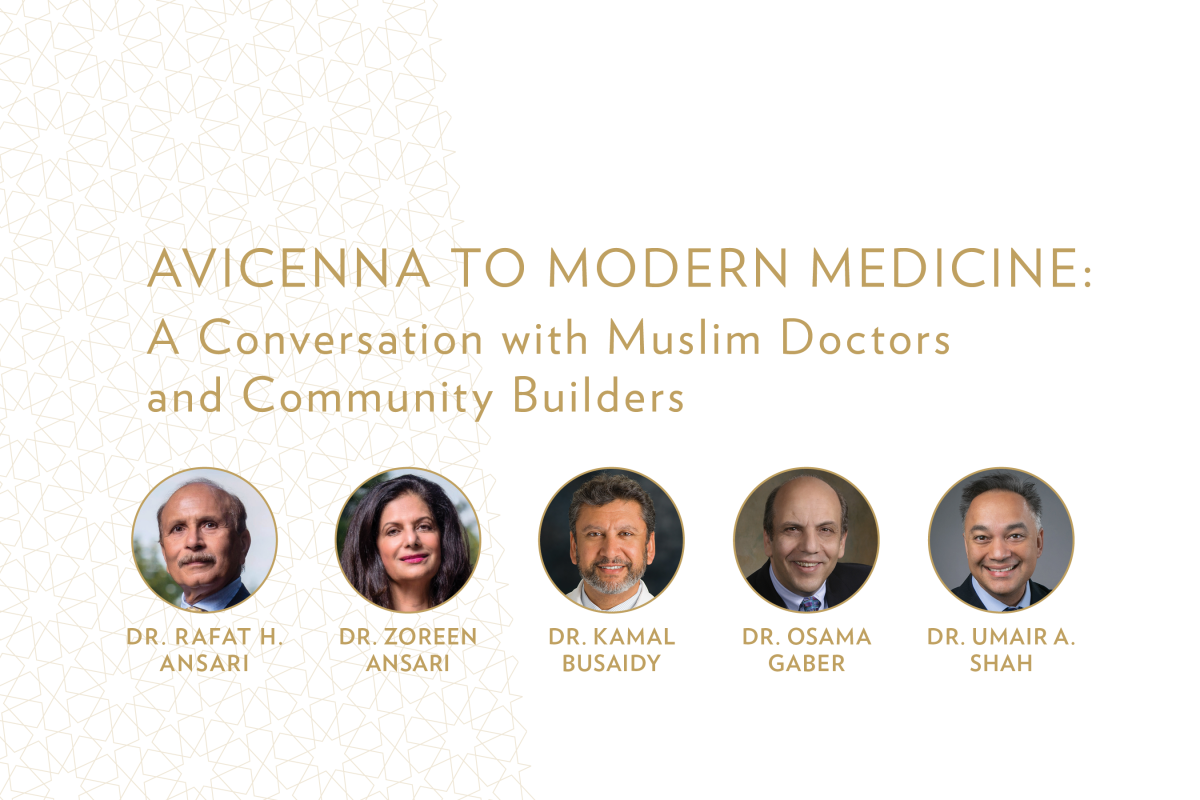 UPDATE (September 26) — This event has sold out. Tickets will not be available at the door.

Modern society owes a tremendous amount to the Muslim world for the numerous groundbreaking scientific and technological advances that were pioneered during the Golden Age of Muslim civilization between the 7th and 17th centuries. Medical discoveries and innovations by Muslim scholars such as Avicenna (Ibn Sina) — who is known as the father of early modern medicine — changed global health and society and laid the foundation for future generations to build upon what they had discovered.

Today, some of the best and brightest medical professionals are Muslims. While Muslims comprise approximately 1 percent of the total U.S. population, Muslim physicians represent 5 percent of all American physicians, ranging from general practitioners and surgeons to specialists such as cardiologists, neurologists, oncologists, and transplant surgeons. This includes a high percentage of Muslim doctors who work in the Texas Medical Center in Houston.

Not only are these Muslim researchers and practitioners leaders in their respective fields, they also contribute significantly to the betterment of American society by giving their time, knowledge, and resources to help improve the quality of life for their fellow Americans.

Join Asia Society for a conversation with some of these medical leaders on their careers, their life journeys, and their desire and dedication to create a lasting positive impact in the world.

Dr. Zoreen Ansari received her medical degree from Dow Medical College in Karachi, Pakistan. After moving to the U.S., she completed her internship at Ball Memorial Hospital in Muncie, Indiana, and her Residency at Memorial Hospital in South Bend, Indiana. In addition to her years in Family Practice, Zoreen has contributed to the medical community through her passion in assisting individuals with Autism and other Developmental Disabilities.

Dr. Rafat H. Ansari earned his medical degree from Liaquat Medical College and the University of Sind in Pakistan, where he was named Best Graduate and earned Gold Medalist in Medicine. After serving residencies at Jinnah Postgraduate Institution in Karachi, and Louis Weiss Memorial Hospital in Chicago, Rafat completed a fellowship in medical oncology and hematology at Indiana University Medical Center in Indianapolis. He currently serves as President of Michiana Hematology Oncology, P.C. and as Volunteer Clinical Associate Professor of Medicine for the Indiana University School of Medicine in South Bend, IN. Rafat’s numerous honors and awards include being named Fellow of the American College of Physicians in 1991, the Danielson Award for Cancer Researcher of the Year in 2000, the American Cancer Society’s Dr. Juan Garcia Lifetime Achievement Award in 2011, and induction into the South Bend Community Hall of Fame. He has published nearly 100 posters, abstracts and journal articles.

Rafat and Zoreen Ansari have been married for 36 years. Through their work as civic leaders, Zoreen and Rafat have made significant strides in the area of Autism and other Developmental Disabilities, which impacts their youngest child, Sonya. In 2008, they founded the Sonya Ansari Center for Autism which serves to fill the gaps in care with adolescents and in schools. The Center offers numerous services including advocacy, community training and awareness, outreach classes for parents and professionals, a parent mentor program, resources, social skills classes, community and center-based Applied Behavior Analysis, recreational programming, and summer programming. Most recently, Zoreen and Rafat, along with the University of Notre Dame have established the Rafat and Zoreen Ansari Institute for Global Engagement with Religion at the University of Notre Dame. This institution aims to deepen knowledge of religion and explain how traditions and practice of various religions influence world events.

Dr. Kamal Busaidy is a full time Professor of Oral and Maxillofacial Surgery at the University of Texas, Health Science Center at Houston. He has been teaching future surgeons in Houston for 16 years, and he holds privileges at Memorial Hermann Hospital, Shriners Hospital for Children, and Methodist Hospital Houston, among others. He is a Fellow of the American College of Surgeons, a Fellow of the American Association of Oral and Maxillofacial Surgeons, and a Fellow of the Royal College of Surgeons of England-Faculty of Dental Surgery. Prior to coming to Houston in 1998, Kamal was in the U.K., where he was born and raised, and where he graduated in 1992 from the London Hospital School of Medicine and Dentistry. Kamal volunteers his time at Shifa USA, and for many years was the Chairman of the Dental Division of the organization. He is Past President of the Houston Society of Oral and Maxillofacial Surgeons and Past President of the Arab American Medical Association (Houston Chapter).

Dr. Osama Gaber received his first academic appointment in 1987, as an Assistant Professor in the Department of Surgery at the University of Tennessee in Memphis. He became an Associate Professor there in 1991, and received his full professorship and was named to the Baptist Memorial Health Care Foundation chair of excellence in transplantation in 1994. He was also the Medical Director for the University of Tennessee Bowld Hospital, and the Methodist University Transplant Institute. Osama is a prolific researcher and has authored over 270 scientific papers, as well as more than 340 abstracts and numerous book chapters. Osama assumed his position at the Houston Methodist Hospital and Research Institute in Houston in 2006 and is currently the Chair and Director of J.C. Walter Jr. Transplant Center. His area of expertise is diabetes, transplant immunotherapy, islet cells, cell isolation protocols, kidney transplant, pancreas transplant, liver transplant, and kidney disorders. Osama received his medical degree from Ain Shams University School of Medicine in Egypt. He completed his residency at Boston University Medical Center and his Clinical fellowship from the University of Chicago.

In 1998, Osama and his wife Lillian established Nora’s Gift Foundation in memory of their daughter Nora, who was killed in a tragic automobile accident. Her organ donations helped several critically ill children and fueled the creation of Nora’s home, an enduring gift to those in need. Nora’s Home offers transplant patients and their families an affordable place to stay where they can find support and share experiences with others, in the comfort of a home-like environment. Nora’s Home is a new, freestanding facility near the Texas Medical Center. Built with the specific needs of transplant patients and families in mind it includes: 32 private bedrooms and baths, a fully equipped kitchen, a meditation room, a community room, an education center and free shuttle services to the medical center

Dr. Umair A. Shah has served as Executive Director and Local Health Authority for Harris County Public Health (HCPH) – the nationally accredited county public health agency for the nation’s 3rd largest county with 4.7 million people — since 2013. Dr. Shah earned his B.A. (philosophy) from Vanderbilt University; his M.D. from the University of Toledo Health Science Center; and completed an Internal Medicine Residency, Primary Care/General Medicine Fellowship, and M.P.H. (management), at the University of Texas Health Science Center. He also completed an international health policy internship at World Health Organization headquarters in Switzerland. Upon completing training,Dr. Shah began a distinguished career as an emergency department physician at Houston’s Michael DeBakey VA Medical Center. He started his formal public health journey as Chief Medical Officer at Galveston County’s Health District before joining HCPH to oversee its clinical health system and infectious disease portfolio. Under his leadership, HCPH has won numerous national awards including recognition as Local Health Department of the Year from the National Association of County and City Health Officials (NACCHO) in 2016. Dr. Shah currently holds numerous leadership positions with respected entities like the National Academies of Sciences, Engineering, and Medicine; U.S. Centers for Disease Control & Prevention; Trust for America’s Health; Network for Public Health Law; and Texas Medical Association. He previously served as president of NACCHO (and its Texas affiliate) representing the nation’s nearly 3,000 local health departments. Over his career, Dr. Shah has been a clinician, an innovator, an educator, and a leader in health.

Alliance for Compassion and Tolerance