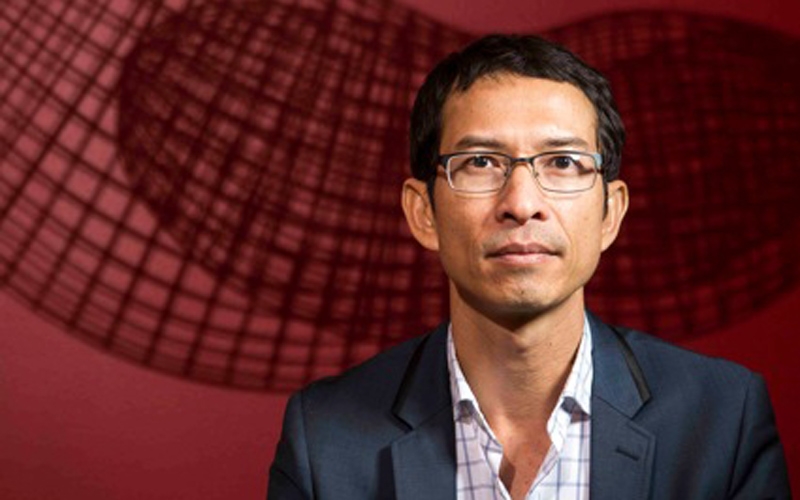 Drawn from Nature brings together a group of artists for whom nature plays a pivotal role in the inspiration for, and execution of, their artworks. Sopheap Pich, Mineko Grimmer, Palden Weinreb, and Seon Ghi Bahk, artists featured in Asia Society Texas Center’s first-ever exhibition dedicated to nature, allow visitors to see its continuing impact in a contemporary context. Learn more

Asia Society Texas Center welcomes Sopheap Pich to discuss his work as it relates to the exhibition Drawn from Nature. Pich is widely considered to be Cambodia's most internationally prominent contemporary artist, and his works have a unique grounding in the natural world, both in their form and concept. The works featured in the exhibition echo organic and vegetal structures, which reference the fragility of the body and the interdependent web of our shared environments through time. His choice to use locally available substances in Cambodia such as bamboo, rattan, burlap, beeswax, and earth pigments imbues his works with a strong physicality coaxed from subtle materials.

Admission to Drawn from Nature is free on November 1 due to the generous support of Teri and Jeffrey Lee. Please note that Cigna Sunday Streets will also be held on the same day, and Caroline Street will be closed to motorized traffic from 12:00-4:00 pm. Guests parking in Asia Society's parking lot should enter through the entrance on Austin Street.

Born in Battambang, Cambodia in 1971, Sopheap Pich moved with his family to the United States in 1984. After receiving his BFA (University of Massachusetts at Amherst, 1995) and MFA (The School of the Art Institute of Chicago, 1999), he returned to Cambodia in 2002. Pich’s work has been featured in numerous international museum exhibitions and biennials in Asia, Europe, Australia, and the United States, including The Art of Our Time: Masterpieces from the Guggenheim Collections at the Guggenheim Museum Bilbao (2015) and Medium at Large at the Singapore Art Museum (2015). In 2013, Pich presented a highly acclaimed solo exhibition at the Metropolitan Museum of Art, New York, entitled Cambodian Rattan: The Sculptures of Sopheap Pich. Pich’s work is included in such major collections as: Metropolitan Museum of Art, New York; Solomon R. Guggenheim Museum, New York; Centre Georges Pompidou, Paris; M+, Museum for Visual Culture, Hong Kong; Singapore Art Museum; Queensland Art Gallery; San Francisco Museum of Modern Art; Albright-Knox Art Gallery, Buffalo; and The Asian Art Museum, San Francisco.

This exhibition was made possible through major support from Chinhui Juhn and Eddie Allen, Mary Lawrence Porter, the City of Houston through Houston Arts Alliance, Nancy C. Allen, Nancy and Robert J. Carney, The Clayton Fund, the Hearst Foundations, Reinnette and Stan Marek, and anonymous friends of Asia Society. Lead funding also provided by Leslie and Brad Bucher, Holland and Jereann Chaney, The Favrot Fund, Bebe Woolley and Dan Gorski, and Dorothy Carsey Sumner, with additional support provided by Olive M. Jenney. Funding is also provided by the Texas Commission on the Arts and through contributions from the Friends of Exhibitions, a premier group of individuals and organizations committed to bringing exceptional visual art to Asia Society Texas Center.