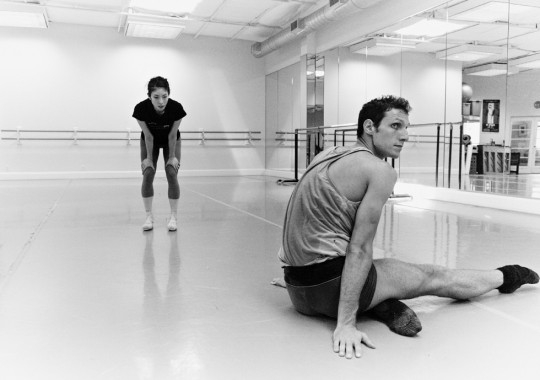 “While creating new pieces during my choreographic career, I have often thought, ‘This would be a wonderful moment for film,’” says Walsh. “I shape scenes cinematically as I put together a narrative work, and have wondered before if details get lost on the stage.”

Combined with a unique soundscape, the film’s story is brought together through the underlying theme of “East Meeting West,” and captures the beauty and poetry demonstrated by the integration of cultures. The new work also highlights the elegant architecture of Asia Society Texas Center, designed by Japanese master of line and grace, Yoshio Taniguchi, which serves as a backdrop to the film.

“Dance with Camera was a wonderful exhibit at Contemporary Art Museum Houston a few years back that offered many images and ideas regarding dance and film. I have wanted to create a similar project for quite some time now, and after my first visit to the Asia Society Texas Center, I knew where I wanted to film,” Walsh notes.

The film will premiere on screen in Asia Society Texas Center’s Brown Foundation Performing Arts Theater and will be followed by an on-stage performance that will be filmed live as a supporting “final act” to the story portrayed.

“Being asked by Dominic to direct this dance film was in many ways a dream come true. Despite leaving Houston four years ago, Texas continues to hold a special place in my heart, and has greatly influenced my art since my return to Europe,” says de Montblanc. “With Dominic's virtuosity, Romain's sensual relationship to light, and my own painterly approach to framing, the piece will portray the surreal world lying between the lines of the everyday.”

De Montblanc last collaborated with DWDT in 2009 on the creation of Walsh’s Firebird, in which Igor Stravinsky’s famous score became the soundtrack to the intimate story of a couple going through a crisis after many years of marriage.

The current project builds upon the foundation created in Firebird by furthering the company’s exploration—through space and movement—into the impact that the domestic and mundane, everyday life can have on the body and the psyche.

In part, the film is also a nod to the novel The Wind-up Bird Chronicle by highly celebrated Japanese author Haruki Murakami. The plight of the novel’s central character caught the attention of Walsh and de Montblanc who immediately saw parallels between the novel and their plans for the film.

In the Murakami tale, protagonist Toru Okada is in a state of transition between jobs, which becomes the detonator for a mind-blowing inner journey. His story seems to come about as a long and strange lucid dream. It begins in a suburban setting, but soon enough the reader’s sense of location seems to evaporate as the character begins to think of his wife as a fantasy or ghost. Within his conscious mind he creates images of her, as if he may stop loving her without these recreations.

This dream-like state was particularly evocative in terms of creating movement and imagery for Walsh and de Montblanc’s film. Through both cinematography and choreography, viewers are faced with the challenging question of presence as in the novel.

In the film, Asia Society Texas Center’s beautiful building helps to set the stage for this dream-like state. Precisely lit by Ferrand and reframed by de Montblanc, the film captures the building’s many celebrated architectural elements—including the sometimes-steamy Elkins Foundation Water Garden. The water garden is featured during a scene in which the thoughts of Luciano’s character “transport” him to the terrace while he is making a cup of tea. He watches the steam rise from his tea pot and begins to daydream of dancing among the steam. The film shares his daydream with the audience as he dances a pas de deux with his wife, elegantly portrayed by Sakai, in the mist rising from the pool.

The film marks DWDT’s second collaborative effort with Asia Society Texas Center, who is generously providing support for the production. The two organizations first worked together in 2012 to bring the world premiere of Walsh’s critically praised Uzume to the stage.

“Houston is a vibrant cultural metropolis, and Asia Society Texas Center has a unique opportunity to collaborate with its diverse artistic neighbors,” adds Asia Society Texas Center executive director, Bonna Kol. “Through this project, we are so thrilled to continue our partnership with Dominic Walsh Dance Theater, whose innovative and creative work celebrates all that makes Houston great.”

The evening is divided into two parts. First, audiences will watch a semi-complete premiere film screening of Malta Kano, TX. Next follows a dance performance by the film’s lead dancers, Domenico Luciano and Hana Sakai, which will be recorded live in the theater.

Audiences should note that cameras will be present in the theater and their likeness may be recorded from a distance during the final portion of the evening.

Since being launched in 2002, Dominic Walsh Dance Theater (DWDT) has been racking up accolades and honors, including being named "Best Dance Company" in 2011 by the Houston Press. DWDT has built a stellar reputation for taking the techniques and skills of classical ballet into more inventive territory.

The company’s diverse repertoire features works by Walsh and such iconic choreographers as Mauro Bigonzetti, Jiří Kylián, Matthew Bourne and Mats Ek, and its roster includes dancers of the highest caliber. In addition to producing performances and educational programs in the Houston area, the company tours the United States and Europe.

With its unique mix of innovation and collaboration, Dominic Walsh Dance Theater is one of this country’s leading contemporary ballet companies. For more information visit: dwdt.org.

Asia Society Texas Center is part of a leading global educational organization dedicated to promoting mutual understanding and strengthening partnerships among peoples, leaders and institutions of Asia and the United States in a global context. Across the fields of arts, business, culture, education and policy, the Society provides insight, generates ideas and promotes collaboration to address present challenges and create a shared future. For more information visit: asiasociety.org/texas

As a principal dancer with Houston Ballet for over a decade, Dominic Walsh received national and international praise for his interpretations of both classical and contemporary roles.

Walsh burst onto the choreographic scene when he won the prestigious Choo-San Goh Award in 1998, and he is now hailed as a leading choreographer who is pushing the boundaries of ballet into new realms. He won a second Choo-San Goh Award in 2007 and received a Princess Grace Award in 2008. Walsh was named a winner of Hubbard Street Dance Chicago's 2010 National Choreographic Competition, and he was the Audience Choice and Judge’s Award winner in Ballet Austin’s 2010 New American Talent Choreographic Competition.

Born in Brussels, Frédérique de Montblanc completed her BFA in Theatre at Concordia University in Montreal in 2004. She then obtained her MFA from the California Institute for the Arts (CalArts) in Los Angeles in 2007.

While in Houston, de Montblanc designed Firebird and Titus Andronicus with Dominic Walsh Dance Theatre. Since returning to Europe, she has designed I Would Prefer Not To by Selma Alaoui, for which she was nominated at 'le Prix de la Critique 2010-11,’ as well as Les Buveuses de Cafe by Compagnie Mossoux-Bonte. More recently she has created the worlds for Sarah Sire's interpretation of A Two Character Play by Tennessee Williams and choreographer Maria-Clara Villa Lobos’ revisit of Rite of Spring.

Born in Lyon, France, Romain Ferrand moved to Brussels where he graduated from the Institut des Arts de Diffusion with a Masters in Cinematography in 2006.

Since then, he has worked on short films, music videos and documentaries—several of which have received prizes, such as Autonomie de la volonté by Antoine Cuypers, which received the Jury’s Grand Prize at the Molodist Festival in Kiev. Another project, Etrangère by Christophe Hermans was presented at over 50 festivals around the world.

Since meeting Frédérique de Montblanc, the two have collaborated on several projects that include video, installation and performance. They worked together on her short dance film La Cave, which was presented on the channel Arte Creative in 2012. Ferrand also created lighting and framed the video sequences for de Montblanc’s installation Heroines/Prologue at the Brussels Nuits Blanches in October 2013.