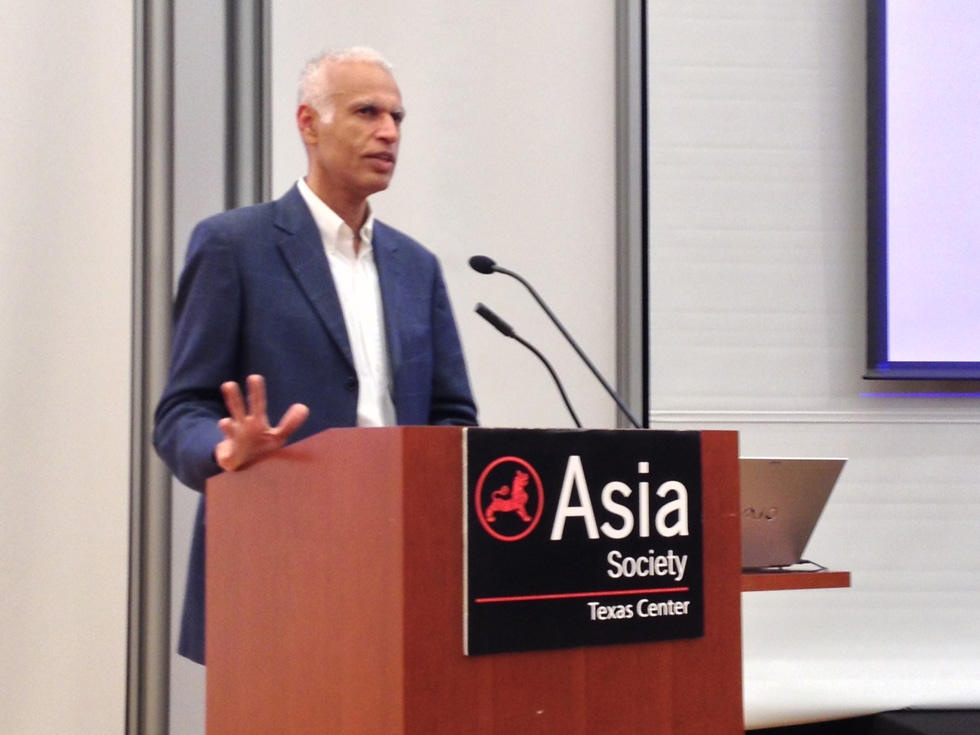 His latest novel, The City of Devi (W.W. Norton, 2013), is his third and forms a triptych with its two predecessors, The Death of Vishnu (2001) and The Age of Shiva (2008), he told an Asia Society Texas Center audience.

Set in Mumbai days before Pakistan has vowed to nuke India’s most populous city, The City of Devi features three characters—Sarita, a determined and gutsy young woman; her husband Karun, who has inexplicably vanished amid the pre-apocalyptic chaos; and the cocky, free-spirited Jaz, who joins Sarita on her search. Suri associates these three with the Hindu gods Devi, Shiva, and Vishnu, respectively.

“When I saw these three characters in this triangle form, I realized there were other trinities in the book as well,” Suri said. These range from the geopolitical—India, China, and Pakistan—to the scientific—Karun is a physicist studying matter, which is made of three generations of quarks.

“This idea of three really caught fire in my mind,” Suri said. “I figured out exactly what I needed to do. I needed to get these three characters together. That’s what really set me free.”

Tonally, The City of Devi is different from his previous two novels, full of irreverent humor, “kind of a wild ride,” he said. In Jaz, it features a character who is Muslim and gay, and it treats gay sex candidly. Suri, who is gay himself, called Jaz “the most fun character I have ever written.”

He infused the book with a spirit of the absurd, he said. The novel opens with the prospect of annihilation hanging over the city and a fruit seller haggling with Sarita over the price of a pomegranate.

“That’s how things would work in Mumbai,” he joked.

His is drawn to write about the city, first, because he was born and raised there. But perhaps more important, “It’s a microcosm of India. You can talk about India in a very economical way just by talking about Mumbai. And it’s the city that has the most drama in India.”

For his next novel Suri, a professor of mathematics at the University of Maryland, Baltimore County, where he has taught for 30 years, wants to combine his two life passions in an e-book that will include video links and math as well as traditional narrative.

“Finally,” he said, “I’m tying those two strands together.”

Book Excerpt: The City of Devi