In partnership with the Harvard Business School Club of Houston 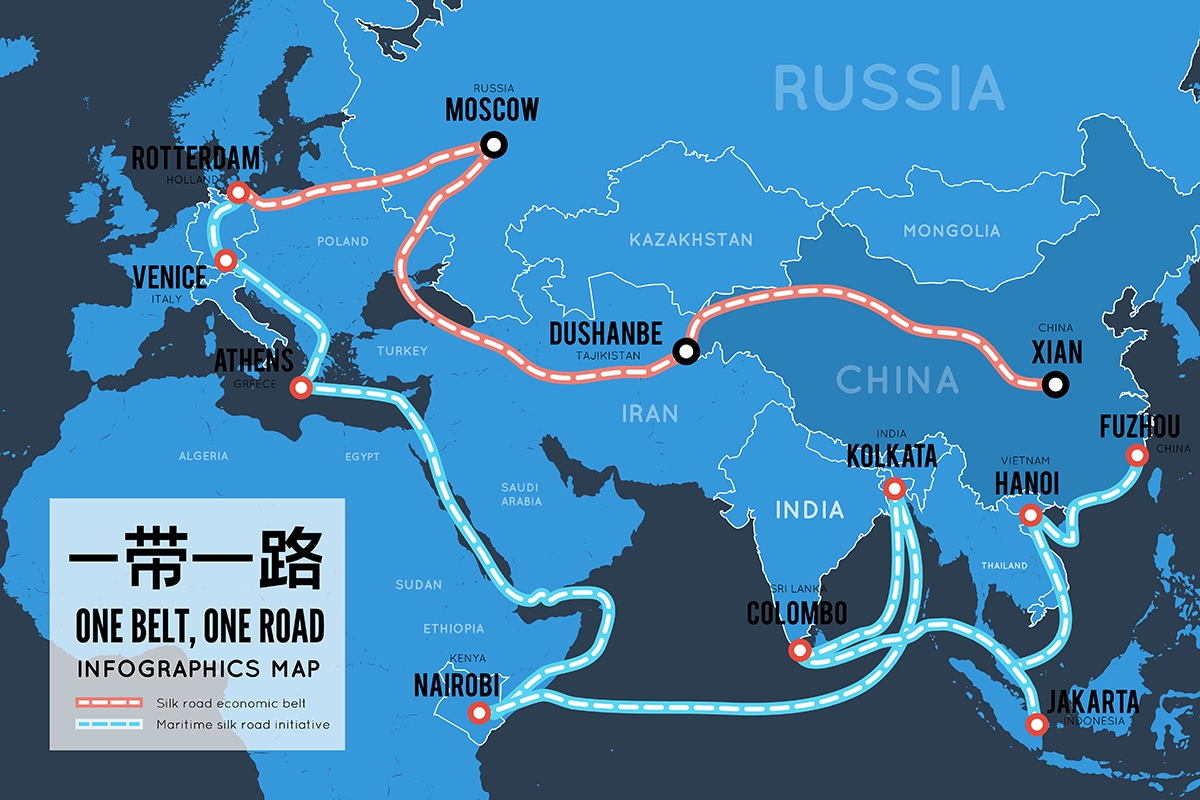 Tune in Thursday, September 16, at 7:30 p.m. CT for a live video webcast. We invite audience questions via the video chat. Please RSVP for this free event.

China's Belt and Road Initiative (BRI) — also known as One Belt, One Road — means many things to many people, including to China and countries in the West. Introduced by President Xi Jinping in 2013, the development initiative seeks to advance connectivity between China and its neighbors, broadly taking the form of an overland "belt" and a maritime "road" that run from eastern China to converge in Venice, Italy.

According to China, the BRI's goal is to promote economic growth, whereby investment in transportation leads to increases in trade, tourism, and other income-generating activity. However, many of China's economic and geopolitical competitors have registered heightened concern regarding BRI's place in China's security strategy, noting that certain infrastructure and technology projects may serve to enhance Beijing's influence over recipient states, as well as help China project military advantages across the globe.

Asia Society President and CEO and former Prime Minister of Australia Kevin Rudd joins Asia Society Texas Center and the Harvard Business School Club of Houston to speak to the dual commercial and military capabilities of China's Belt and Road Initiative, as well as its strategic implications for the U.S. and global allies.

The Hon. Kevin Rudd AC is President and CEO of the Asia Society, and inaugural President of the Asia Society Policy Institute. He served as 26th Prime Minister of Australia (2007 to 2010, 2013) and as Foreign Minister (2010 to 2012). He is Chair of the Board of the International Peace Institute in New York a member of the IMF Managing Director’s External Advisory Group and a member of the Global Leadership Council with Sanitation and Water for All. He is a Distinguished Fellow at Chatham House and the Paulson Institute, and a Distinguished Statesman with the Center for Strategic and International Studies. He is also a member of the Comprehensive Nuclear Test Ban Treaty Organization’s Group of Eminent Persons.

Charles C. Foster, who served as Chairman of Asia Society Texas Center for 20+ years, is Chairman of Foster LLP, one of the largest global immigration law firms. He received his Bachelors from the University of Texas and his J.D. from the University of Texas School of Law. Charles is a Board member and the founding Chairman of the State Bar of Texas Immigration and Nationality Law Section, the past national President of the American Immigration Lawyers Association and the Chairman of the American Bar Association Coordinating Committee on Immigration Law. Charles served as the principal advisor to President George W. Bush on U.S. immigration policy during the 2000 and 2004 presidential campaigns and was an advisor on immigration policy issues to President Barack Obama in the 2008 campaign. He is also Chairman of U.S. China Partnerships, Americans for Immigration Reform, a 501(c)(3) affiliate of the Greater Houston Partnership (GHP) and the GHP’s Immigration Task Force. He is also Vice Chairman of the George H.W. Bush Foundation for U.S. China Relations and is a member of the GHP Board and Executive Committee and the Houston Ballet's Board. He was designated a “Texas Super Lawyer” from 2003 to 2020 by Texas Monthly, the “Top Notch Lawyer in Immigration” in the Texas Lawyer “Go To Lawyers Guide,” the #1 Ranked Immigration Lawyer in Texas by Chambers USA, and he was listed as one of the nation’s “20 most powerful employment attorneys” in immigration by Human Resource Executive in June 2011. He was the 2013 recipient of the Houston Bar Association’s prestigious Leon Jaworski Award and was featured in the critically acclaimed movie Mao’s Last Dancer.