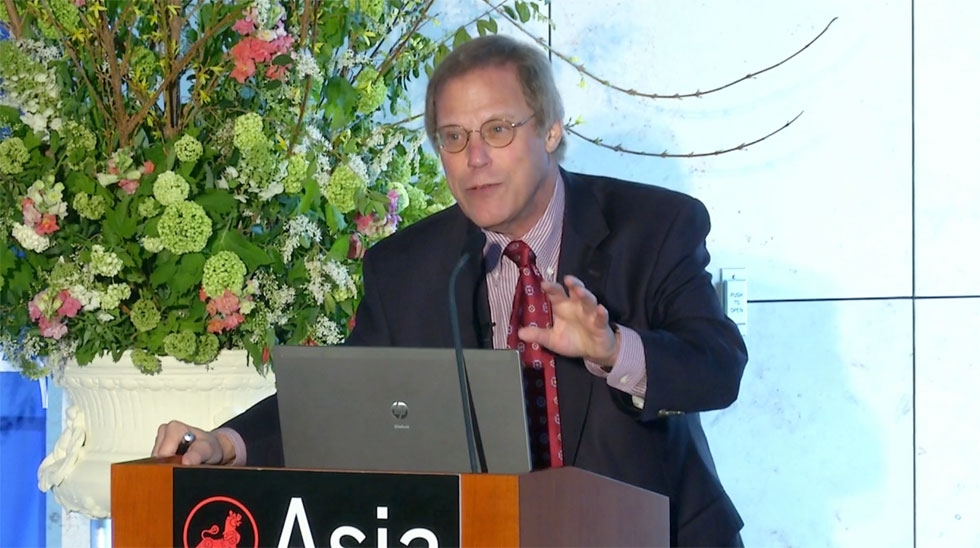 HOUSTON, April 13, 2012 — “The American future is here in Houston, now,” says Dr. Stephen L. Klineberg. A demographic revolution over the last 40 years has made Houston “the most ethnically diverse city in this country.” In 30 years, he says, all of America will look like Houston.

Co-director of the Kinder Institute for Urban Research and professor of sociology at Rice University, Klineberg was the featured speaker at a forum titled Houston as an Asia Pacific City and Its Significance to Cities Across America. Asia Society Texas Center hosted the invitation-only program as part of the four-day Grand Opening of its new 40,000-square-foot home.
Click here to watch the video
.

When he initiated the now-annual Houston Area Survey in 1982, Klineberg had no inkling of the remarkable transformation he would document. The last 30 years would change one of America’s most mono-ethnic cities into a city of great ethnic balance.

“We have surpassed New York in having the most even distribution of the four great ethnic communities of America,” Klineberg said.

Many factors influenced this sea change, not least the evolution of America’s immigration laws.

“From 1924 to 1965, the United States was operating under one of the most viciously racist laws the U.S. Congress ever passed, the National Origins Act,” Klineberg said. “It came out of the anti-immigrant racist backlash that accompanied the last great wave of immigration when 15.9 million immigrants came to America between 1890 and 1914.”

In 1965 Congress changed the law. The result, which lawmakers had not anticipated, was a huge increase in non-Northern European immigration.

“In the 2000s about 11 million immigrants have come,” Klineberg said. “Eighty-eight percent are from Asia, Latin America, Africa and the Caribbean. The United States, which throughout its history had been an amalgam of European nationalities, is becoming a microcosm of the world — the first nation in history that can say, ‘We are a free people, and we come from everywhere.’”

When panelists took up Klineberg’s themes, Khator, the first Indian immigrant to head a comprehensive U.S. research university, talked about how Houston’s diversity astonished her when she came four years ago.

“I had no idea,” she said. “Somehow Houston and Asia are not connected in the minds of people. I can vouch for what Dr. Klineberg said. We are the second most diverse research university in the nation.  But the point is not just the numbers. You can find any group of students, and there will be two or three different (ethnicities) there. I believe that is preparing students for life.”

The growing diversity of the United States and of Houston will only make them stronger, said the Hong Kong-based Chan.

“Houston, viewed as a microcosm of the whole country, is evolving and adding a new dimension to why this city is strong. For those of us from the outside, we need to change our mindset about what Houston is all about,” he said.

“Almost nobody in Hong Kong is originally from Hong Kong. That makes Hong Kong strong. America obviously is the unique country in the world. Almost nobody is original. This is the only country I know of that is not based – at least no longer – on language or ethnicity or religion. It is truly an amalgam. History has shown that when you have diversity, you have strength.”

Wadsworth said he sensed that Houston “has that magic of creativity, innovation and risk-taking which creates the competitiveness that defines great cities.”

What has happened in Houston will soon be true nationwide, and by 2040 or 2045 the entire country will be minority-majority, Klineberg said. How Houston responds to the new demographic realities may provide a blueprint.

“This is one of those key places where the American future is going to be worked out.”

Reported by Louis B. Parks

Video: Houston as an Asia-Pacific City