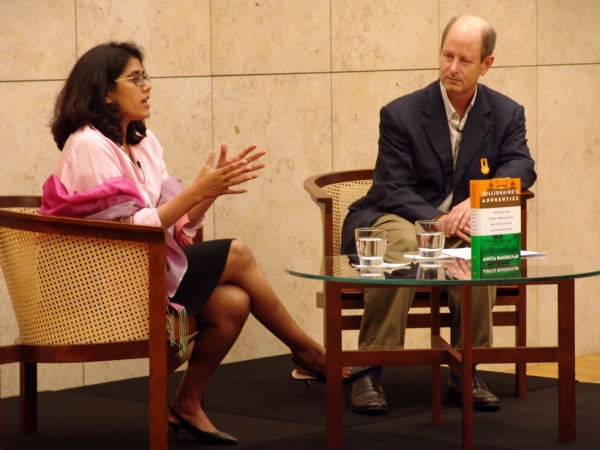 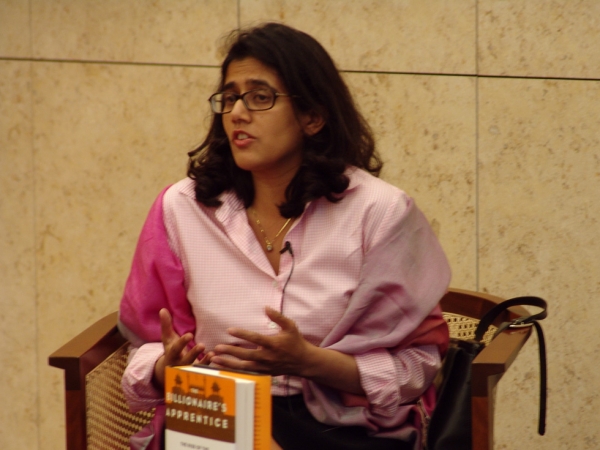 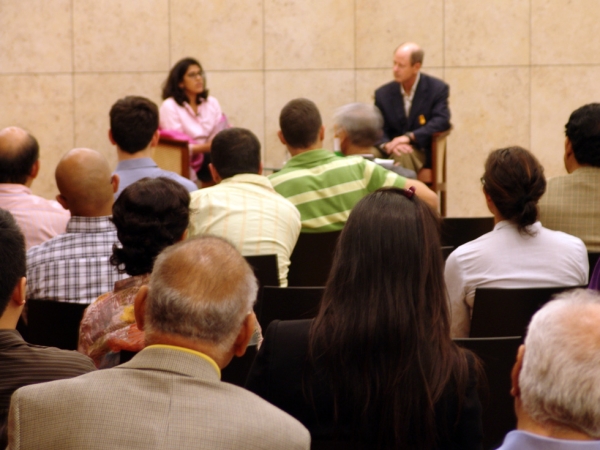 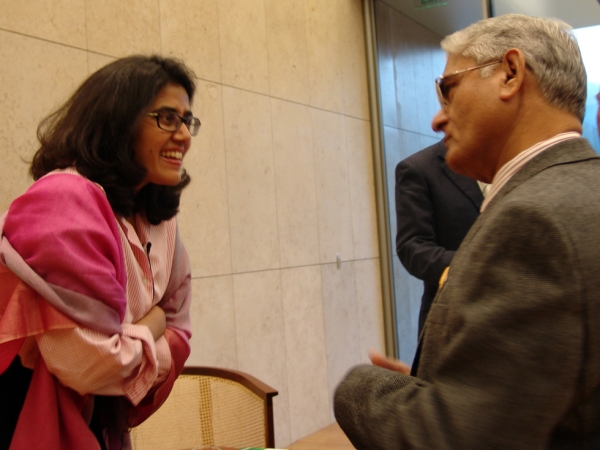 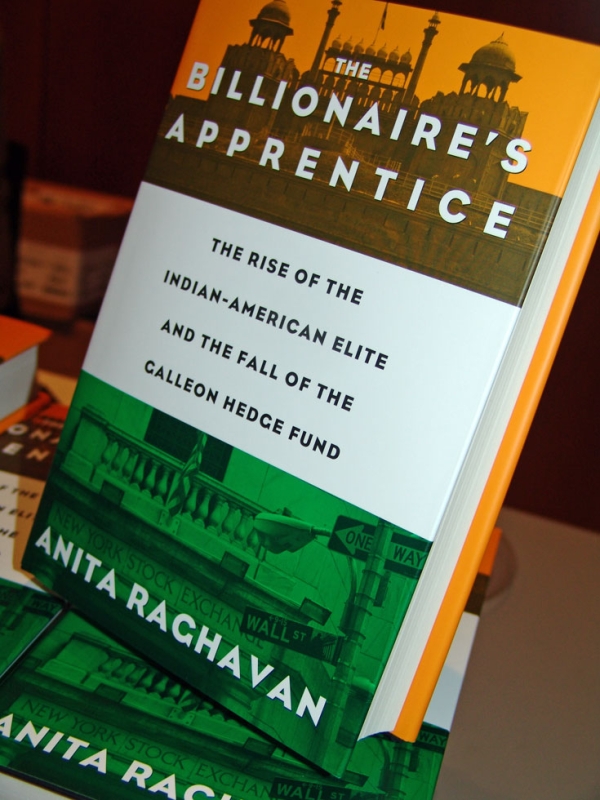 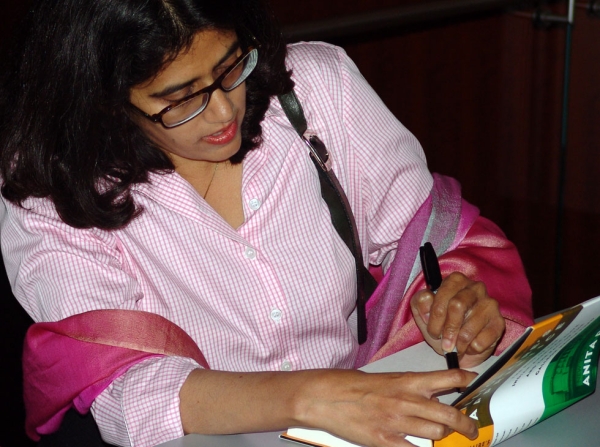 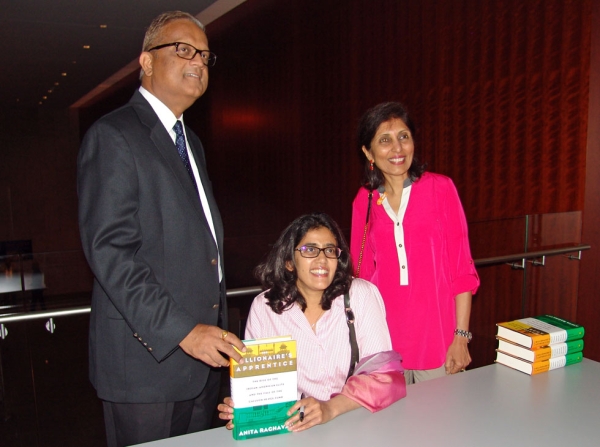 HOUSTON, October 10, 2013 — Two Indian American titans of Wall Street, disgraced. Raj Rajaratnam, founder of one of the biggest hedge funds in the country, packed off to prison for 11 years. Rajat Gupta, the admired former head of consulting giant McKinsey and Co., accused of being one of Rajaratnam’s sources of information for insider trading.

But there’s a positive way of looking at this scandal of high finance, says Anita Raghavan, author of The Billionaire’s Apprentice: The Rise of the Indian-American Elite and the Fall of the Galleon Hedge Fund. It shows just how far Indian Americans have come in the United States, she says, ticking off Indian American achievement in a variety of endeavors.

Raghavan has written an enormously ambitious book, Allen observed, at once a narrative of the rise of able and ambitious Indian Americans over the past half century, a look inside the world of high-flying finance, and a crime story.

In 2009 Raghavan, a Forbes Magazine reporter, started getting phone calls from Indian friends with news of the arrest for insider trading of Rajaratnam, billionaire founder of the Galleon Group, and Anil Kumar, a director at McKinsey and “widely viewed as one of the brightest lights in the Indian community.”

“[Kumar] was someone that no one could fathom could have committed a crime like this,” she said. “I remember my friends saying this can’t be true. That started me on the journey.”

Three months later Kumar pleaded guilty to providing insider information to Rajaratnam in exchange for $2 million, the first of a series of surprises that rocked Wall Street.

The Sri Lankan-born Rajaratnam was a self-described rogue, born into a wealthy family, educated in England and at the Wharton School, cocky, garrulous, driven, a man “who was what he was and didn’t care,” Raghavan said.

“He loved the game. When people ask me why do you think Raj did this I say it was all about showing he was smarter than the system.”

Rajaratnam had street smarts. He identified people’s Achilles heel and exploited that. With the highly intelligent Anil Kumar he dwelled on how McKinsey didn’t appreciate his abilities.

Rajat Gupta emerges as an almost tragic figure in the story. He was “certainly not a rogue,” Raghavan said. Born into modest circumstances in India, he won a scholarship to Harvard and eventually rose to become CEO of the internationally respected McKinsey and Co., stepping down in 2007. He achieved this by “hard work and honest means.”

“Raj was very savvy,” Raghavan said. “He befriended Rajat at a time when Rajat was coming off the helm of McKinsey after 10 years. It was just a profound loss of power and a time of vulnerability, and Raj sensed that.”

Gupta had spent most of his career in Scandinavia and Chicago, moving to New York relatively late in life. The world of power and enormous wealth in the Big Apple proved seductive, Raghavan said. Despite being worth millions, Gupta wanted to join the billionaires’ club. That was the vulnerability Rajaratnam exploited.

The federal government’s case alleged that Gupta, who served on the board of Goldman Sachs, called Rajaratnam to tell him that board members had just been informed that Warren Buffett’s Berkshire Hathaway would plow $5 billionaire into the investment bank, a move that would push up the bank’s share price. The information had yet been released to the public. Immediately after hanging up, Rajaratnam put in a multi-million-dollar buy order on Goldman Sachs stock. Gupta was convicted of insider trading and sentenced to two years in prison. He has appealed the conviction.