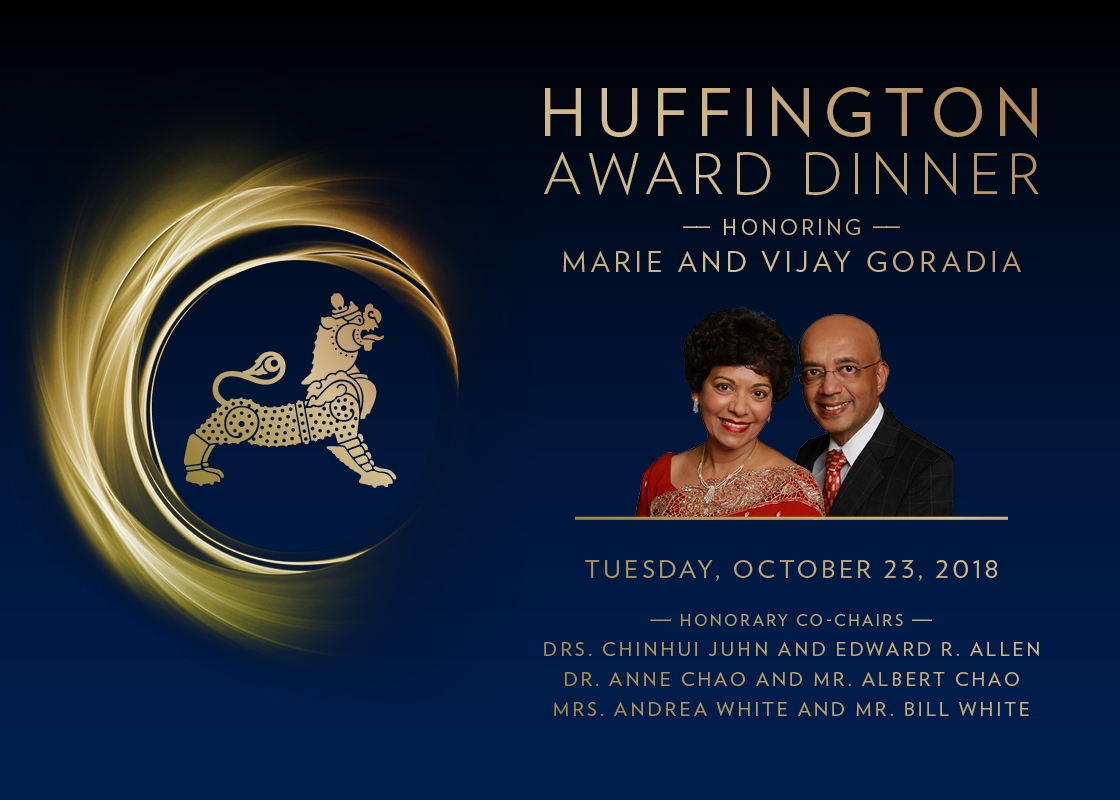 HOUSTON, September 11, 2018 — Asia Society Texas Center (ASTC) announces the presentation of the Roy M. Huffington Award to two celebrated Houstonians, Dr. Marie and Vijay Goradia, who have made significant contributions to and a global difference in the areas of literacy, education, and healthcare in India. The award will be presented at ASTC’s Huffington Dinner on October 23, 2018.

“Marie’s and Vijay’s dedication to lifting educational standards in disadvantaged parts of the world is exemplary. Without their support of Pratham, a charity which is closing the gap on universal literacy in India, millions of children would miss out on their true potential,” says Bonna Kol, ASTC President. “Our interconnected world is stronger because of them--they are a shining example of global leadership on many fronts.”

The Huffington Award recognizes leaders who have been a major force on the international stage. Named for the Houston oilman and former ambassador who played a leading role in creating Asia Society Texas Center, the Roy M. Huffington Award is the highest honor bestowed by the Texas Center. Former recipients include President George H.W. Bush, former Exxon CEO and Secretary of State Rex Tillerson, Secretary of State James A. Baker III, and the Honorable Kevin Rudd (former Prime Minister of Australia).

Dr. Marie Goradia received a Ph.D. in Molecular Biology from University of Bombay while working at the Bhabha Atomic Research Center, and did her postdoctoral studies at Cold Spring Harbor Laboratory in New York. Marie is the mother of two wonderful children, Sapphira and Kevin; serves as the Director of the Goradia Family Office; is an avid world traveler and an award-winning ballroom dancer. A distinguished toastmaster, Marie has served as the president, area governor, and mentor to Toastmaster clubs. An active community volunteer, Marie serves on the Board of Directors of Pratham USA and is the past president of Pratham Houston chapter. Marie also serves on the advisory board of Asia Society Texas Center and the Board of Visitors of MD Anderson Cancer Center. Marie received an award for her “Impact on Humanity” from the Indo American Chamber of Commerce of Greater Houston.

Vijay Goradia is a native of Mumbai, India, and migrated to the U.S. in 1978. He founded Vinmar International, a global distribution company in 1978, which now does business in 110 countries. Vijay established Goradia Capital to invest in and acquire other businesses. Vijay and his companies have received numerous awards in recognition of business success and philanthropic work. These include the U.S. President’s “E” Export Award, Outstanding Texas Entrepreneur Award by the State of Texas, United Nations Association Award, EY Master Entrepreneur Award, Houston Technology Center Award, America India Foundation Award and the Asian Pacific American Heritage Award. Vijay and Marie received Interfaith Ministries’ Tapestry Award.

Marie and Vijay are passionate about philanthropy, and their goal is to improve the quality of life and access to opportunity for the underprivileged. Through the Goradia Foundation headed by their daughter Sapphira, they support nonprofits around the world that expand access to quality education and healthcare.