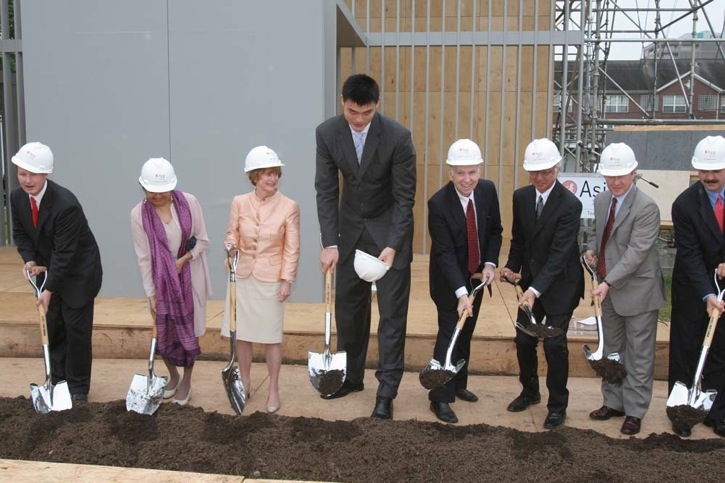 HOUSTON, May 15, 2008 - The threat of rain couldn't stop Asia Society Texas Center from breaking ground on its long-awaited new facility on two city blocks of land in Houston's Museum District.

The 38,000-square-foot building is designed by renowned Japanese architect Yoshio Taniguchi, best known in the US for his 2004 expansion to the Museum of Modern Art in New York City. A two-story mock up of the building's entry corner, built at Taniguchi's request to help him better visualize his plans, provided visitors and the media with a dynamic experience of what the architect has planned for Houston. A day before the groundbreaking, Taniguchi told the Houston Chronicle, "It's not just a museum. We have to create an environment for people to meet and interact with each other."

"In creating this facility with Mr. Taniguchi," said Martha Blackwelder, "we not only realize our goal of a permanent home for our events and celebrations, we are also able to introduce Texas to one of the leading Asian architects of our time."

Asia Society President Desai described the Texas Center building as a "bridge between America and Asia," adding, "you might say Bilbao has Guggenheim, Houston has Taniguchi."

Just after the first spade of soil was turned, clouds that had lingered all morning broke into rain, so the crowd continued to celebrate in a tent. The new building is slated to open in March 2012.