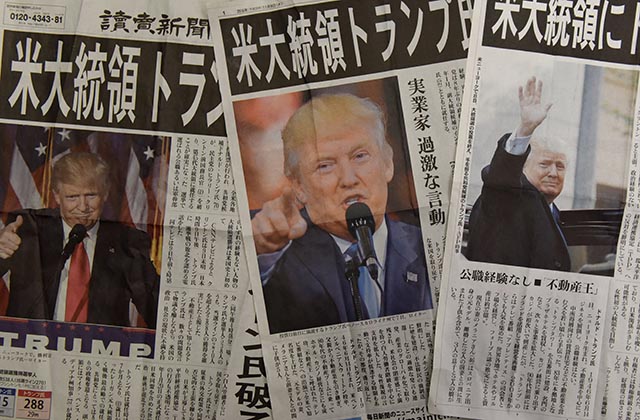 Japanese newspapers report the victory of Donald Trump in the U.S. presidential election in Tokyo on November 9, 2016. (Toru Yananaka/AFP/Getty Images)

Following Donald Trump’s upset victory in the U.S. presidential election on Tuesday, leaders and thinkers across Asia are wondering what the implications will be for the region — and which campaign promises Trump will follow through on.

On November 10, Asia Society in New York will host a discussion with Ambassador Nicholas Burns, Ashley Tellis, Yun Sun, and Jon Williams on what lies in store for the next U.S. president in terms of relations with the nations of Asia.Learn more

Trump’s win had immediate economic implications throughout the Asia. As in the rest of the world, stock markets slumped upon the news, though they’ve since rebounded. In the longer term, the Trans-Pacific Partnership (TPP) — a trade agreement among the United States and 11 Pacific Rim countries — is unlikely to be implemented. Trump, who will enjoy a Republican-controlled congress, has expressed stiff opposition to TPP and other free trade agreements, calling them “disasters” and “job killers.”

Security will be another major area of concern. Trump has vowed to dismantle what he’s labeled a “disastrous” nuclear deal with Iran in which the country agreed to cease development of its weapons program in exchange for sanctions relief. Iranian Foreign Minister Mohammad Javad Zarif responded to Trump’s win by saying that “America has accepted the nuclear deal as a multilateral international commitment and it will have to implement the nuclear deal."

In Northeast Asia, Japan and South Korea also have reason for anxiety about a Trump administration. During the campaign, the president-elect stated that the U.S. alliance with each nation cost too much money and even suggested that the countries should develop their own nuclear weapons rather than rely on the U.S. umbrella. On Wednesday, the heads of state of both countries offered their congratulations to Trump, with Japanese Prime Minister Shinzo Abe calling him “a very successful businessman with extraordinary talents.”

Trump’s approach to North Korea could mark a major shift as well. He has called on China to “go into North Korea” to end the isolated country’s nuclear development program but has also said he would be willing to sit down and speak with leader Kim Jong Un directly. In May, North Korean state media gave rare praise to Trump for this willingness, calling him a “wise politician” and “far-sighted candidate” who could help unify the Korean peninsula.

The Asian nation with perhaps the most at stake with Trump is China. Throughout the campaign, the president-elect accused the country of stealing American jobs and “raping” the United States through unfair trade practices. He has threatened to label China a currency manipulator (a charge most economists say is outdated) and slap a 45 percent tariff on all Chinese goods.

Trump may also seek to undo or ignore commitment to climate change cooperation with China — one of the few areas where exchanges have remained cordial as Sino-American relations have soured in recent years. Trump has claimed that the concept of global warming “was created by and for the Chinese in order to make U.S. manufacturing non-competitive.”

Chinese President Xi Jinping reportedly called Trump after his victory, saying that he looked forward to working together to “uphold the principles of non-conflict, non-confrontation, mutual respect, and win-win cooperation.”

Trump’s election could also change the relationship between the United States and the Philippines, historically one of Washington’s strongest allies in the region. President Rodrigo Duterte — who has been dubbed the “Trump of the East” for his colorful populist rhetoric — expressed an affinity for Trump following his victory. "Long live Mr. Trump!” he said during a visit to Malaysia on Wednesday. “We both curse at the slightest reason. We are alike."

In October, Duterte announced an ambiguous “separation” from the United States in favor of a closer relationship with China. But in his remarks Wednesday, Duterte appeared to indicate that Trump’s win may have altered his stance. “I don't want to quarrel anymore [with the United States] because Trump has won," he said.

On combating the Islamic State (ISIS), Trump has been vague except to express a willingness to send in up to 30,000 ground troops to confront the organization in Syria and Iraq. And while he has spoken ill of embattled Bashar al-Assad, Trump has noted that the Syrian president “is killing ISIS” along with Russia and has not called for his ouster.

In his victory speech early Wednesday morning, Trump sought to ease international concerns about his presidency. “I want to tell the world community that while we will always put America’s interests first, we will deal fairly with everyone, with everyone — all people and all other nations,” he said. “We will seek common ground, not hostility; partnership, not conflict.” How the new president’s approach to Asia plays out will be one of the central questions of his foreign policy.