For Western Press, Afghanistan's Heritage Takes a Backseat to Business 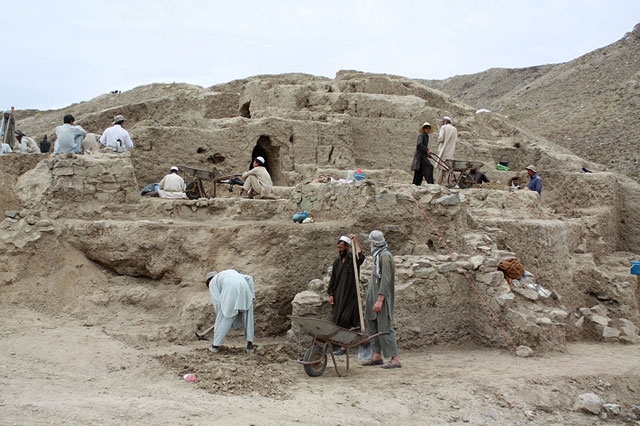 "Delays Imperil Mining Riches Afghans Need After Pullout," reported the Wall Street Journal this week, referring to mining projects in Afghanistan and one in Mes Aynak, in the eastern part of the country, in particular. In 2009, Afghanistan granted a Chinese mining consortium that includes the China Metallurgical Group Corporation (MCC) and Jiangxi Copper the rights to extract copper — along with rights to companies from India, Canada, the United States and Britain to mine iron ore, gold and oil.

The story caught our attention, as Asia Blog has been covering the threat to a 2,000-year-old religious and cultural site, consisting mainly of a Buddhist monastery complex, lying directly above the copper mines. In the past, the Journal has also highlighted the importance of preserving Afghanistan's cultural heritage by presenting a detailed account of the ongoing archaeological efforts to save artifacts unearthed at Mes Aynak.

Naturally we were surprised to notice that the latest Journal coverage dedicated only a couple of sentences to the historical and cultural significance of the site. Here's what they had to say:

One cause of the delays was the discovery of ancient Buddhist monasteries at Mes Aynak, long-buried by the shifting sands. These have required a salvage effort, led by French archeologists, that remains ongoing.

While the article seems to convey a sense of urgency for the mining project to begin from an economic development perspective, it is disappointing to see that the conservation of Afghan cultural heritage seems to be less of a concern for the international community and Western media.

Follow the links below to learn more about the endangered Mes Aynak site.