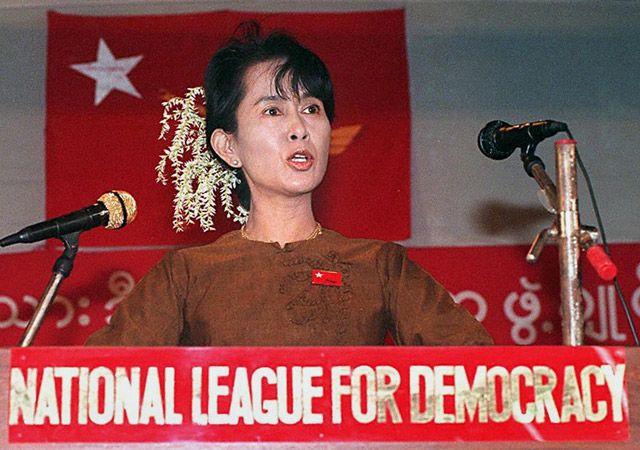 Aung San Suu Kyi addresses a gathering of supporters at her residential compound in Yangon, Burma on January 4, 1997.

Twenty-five years ago I flew to Rangoon in a hot and tense summer, there to gauge the power of a growing democracy movement that seemed hobbled — and increasingly threatened — by a brutal military junta. I was a journalist, and so an obvious aim was to get to "the villa," the quiet, neglected place on Inya Lake where Aung San Suu Kyi received guests — reporters, diplomats and representatives of non-governmental organizations. In those days Suu Kyi wasn't spending much time in the villa; she had been traveling across her country, taunting the ruling junta, speaking to thousands of fervent followers at a time when public gatherings of more than three were considered unlawful.

After a week spent covering those gatherings, a fellow reporter and I were invited to the villa, to see the woman who had become the leading figure of dissent in one of the world’s most isolated nations.

Suu Kyi welcomed us with a smile, an apology ("I gather it's been difficult to arrange our meeting"), and a plate of tea and cookies, and then she spoke with us for a little over an hour. She said she could not "remain indifferent to what was going on" in Burma, though she acknowledged the dangers of what she was doing. Several months earlier, Burmese soldiers had shot and killed hundreds of student demonstrators. A different reminder of the perils of dissent had come just a few weeks before our visit, in the form of a bloodbath at Tiananmen Square. Without a trace of bombast or a raised voice, Suu Kyi insisted she was not bothered by the military's threats or the potential danger. Her models, she said, were Gandhi and Martin Luther King, Jr. "I certainly don't want any more people to be shot," she said. "But this does not mean we are going to sit back weakly, and do nothing."

Aung San Suu Kyi spoke those words in mid-July, 1989. Twenty-five summers ago. Twelve days after our meeting, Suu Kyi found her home cordoned off by soldiers. She was placed under house arrest. It would have been hard at the time to imagine how long this sad status quo would last, a kind of Cold War "freeze" that left Suu Kyi in various states of imprisonment, and her movement frozen, basically, while the junta ruled and kept Burma in a seemingly hopeless state of poverty and isolation. Time and again the regime would make conditional offers — in particular the prospect of exile to Great Britain, where Suu Kyi might join her family. The catch was always that she could not expect a safe return. When her husband, the Oxford scholar Michael Aris, was diagnosed with cancer in 1999, the government refused to grant him a visa that might have let him see his wife. Still Suu Kyi refused to leave her country. Aris died later that year.

I next saw Aung San Suu Kyi in a setting that could not have been more different from the Rangoon villa. In June 2012, a free woman, she flew to Norway to receive the Nobel Peace Prize she had won two decades before. I went to the ceremony at the Oslo Town Hall — where Norway's royal family and a packed house of diplomats and NGO officials paid homage to the woman who been isolated for so long.

"We have been waiting for you for a very long time," the Nobel Committee Chairman Thorbjorn Jagland said. "In your isolation, you have become a moral leader for the whole world."

It was a remarkable moment. That day Suu Kyi's marathon struggle invited comparison to other towering figures — Nelson Mandela and Andrei Sakharov among them. Like Mandela, for all her struggles, she evinced no appetite for revenge. "What I want most," she said on her arrival in Europe, "is reconciliation and not retribution."

Two years later, one is reminded that even the greatest icons of dissent, the most eloquent and compelling fighters for freedom, often face difficulties when the post-dissent life comes, with all its messy reality. In Poland, Lech Walesa went from a high pedestal of honor — earned in a remarkably brave and clever stand against the Soviet occupiers — to disgraced President, all in a matter of two years. Even Mandela took his lumps, and suffered falls (though far less precipitous) in the poll numbers, after making the transition from prisoner to President. In both cases, the profound struggle for freedom had been won, only to be replaced by the practical needs of governance, and consensus-building.

Today Aung San Suu Kyi is dealing with her own post-dissent time — a time marked by political squabbles and a dangerous ethnic conflict that pits a Muslim minority against the country's Buddhist majority. Suu Kyi remains the standard-bearer for the National League for Democracy, or NLD, but she is a politician now — there is no other way to say it — and a politician fighting, among other things, for a constitutional amendment that would allow her to contest for the presidency (she cannot under the current rules — having had a spouse who was "a foreign citizen"). She may have won the Nobel, and many more accolades for her long struggle, but she is not winning battles on the political front — not for the moment, at least. The military stands its ground, resisting more change. The world, she tells visiting reporters now, was too optimistic about the potential for reform in Myanmar; it's only a "veneer of democracy," she said recently. "Everybody has been talking about the tremendous reforms that have come to our country, but I think it all has been overstated." Her supporters had hoped that her powerful personality and engagement with President Thein Sein might lead to better outcomes. Instead they have learned that even Aung San Suu Kyi has limits on her power, democracy or no.

Of course, only a fool would underestimate the stamina and staying power of the quiet, defiant woman from the villa on Inya Lake.

Today, whenever the news touches Aung San Suu Kyi, for good or for ill, I think back to that conversation in Rangoon, a quarter century ago. What she said at the time had seemed both brave and hopelessly optimistic.

"Civil disobedience has a great history," Suu Kyi told us. "That is why I mention Mahatma Gandhi, and Martin Luther King. Martin Luther King said to the people, 'I have a dream.' Well, in a way it is the same with us. We just want to bring our dreams to reality."