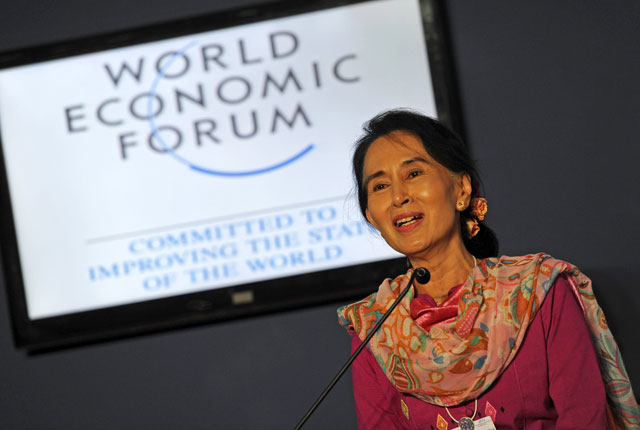 Myanmar democracy leader Aung San Suu Kyi speaking at the World Economic Forum on East Asia, where she declared her intention to run for president, at the Myanmar International Convention Center in Naypyidaw on June 6, 2013. (Soe Than WIN/AFP/Getty Images)

Earlier today Myanmar's opposition leader Aung San Suu Kyi announced her intention to run for president in 2015. The Nobel Peace laureate and Member of Parliament made the remarks at a World Economic Forum event in Myanmar's capital, Naypyidaw, confirming a goal many had speculated about since the reformist government of President Thein Sein released her from house arrest in November 2010. In order for Aung San Suu Kyi to make a bid for the post, there would need to be an amendment to the constitution, which blocks anyone who has a spouse or children with foreign citizenship from the position. Aung San Suu Kyi has two British sons by her deceased British husband, Michael Aris.

Asia Society's Vice President of Global Policy Programs Suzanne DiMaggio, an expert on U.S.-Asia relations and U.S. policy toward Myanmar, had this to say about the announcement and potential outcome:

If Aung San Suu Kyi succeeds in overturning a provision in Myanmar's military-drafted constitution that effectively bars her from becoming president, she will undoubtedly become the frontrunner to lead the country in 2015. Even with her immense popularity, she still could face stiff competition from current President Thein Sein, who may or may not seek re-election, and the Speaker of the Parliament's Lower House Shwe Mann. At the mid-point of his five-year term, and defying all expectations, Thein Sein stands at the helm of the stunning transition underway in Myanmar. Shwe Mann has established himself as a compelling leader in the parliament and a champion of reform.

The composition of the parliament resulting from the next general election in 2015 will be the critical factor in deciding who will be elected president, and the military is likely to hold the key. One of the most remarkable developments of the past two years has been the willingness of former military leaders now in positions of power to embrace Aung San Suu Kyi. Thein Sein, Shwe Mann, and other former military officials leading the reform effort have recognized that without the country's icon of democracy at their side, they could not capture the support of the people. If they needed any further proof of this, the sweeping victory of Aung San Suu Kyi’s National League for Democracy (NLD) in the 2012 by-elections left no doubt. Whatever the outcome of the next general election, Myanmar's has three recognized leaders behind its political transition, promising a continuity of reforms beyond 2015.

Visit Asia Society headquarters in New York on June 26 for Myanmar in Transition: Opportunities & Obstacles, a panel discussion that will launch a new Asia Society report.