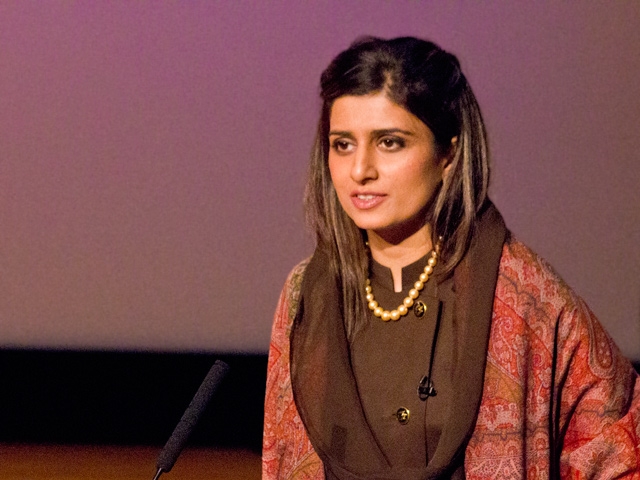 "What do we see today?" Khar asked the packed house at Asia Society headquarters in New York. "We see three incidents across the LOC (line of control) and we see warmongering which puts the last 60 years actively back into our memories. Warmongering coming in from the other side of the border, which I thought was the thing of yesteryears and the thing that we had put behind us."

Pakistan's relationship with neighbor and rival India is on shaky ground, following the deaths of Indian troops in Kashmir. Indian Prime Minister Manmohan Singh said today Pakistan's failure to investigate the alleged killings signified the end of "business as usual" between the countries. And today came reports that Indian troops killed a Pakistani soldier in the disputed territory.

"As I read statements coming in from the highest levels of government, I can just say we are deeply disappointed," Khar continued. "And I can say on behalf of my government that we feel that the dialogue process should be uninterrupted and uninterruptible. ... We must not close the door on dialogue."

After her initial unscripted address, Khar was joined on stage by TIME political columnist Joe Klein, who pressed the foreign minister on a number issues.

Earlier on Tuesday, Pakistan's Supreme Court ordered the arrest of Prime Minister Raja Pervez Ashraf on allegations of corruption. Khar declined to comment directly on the ruling, but said while the government must support an independent judiciary, the only way to depose a prime minister should be through parliamentary voting.

The ouster comes as an anti-corruption march, led by Sunni cleric Tahir-ul Qadri, made its way to Islamabad early in the week. Qadri, calling for electoral reform, says he wants a caretaker government to be installed to oversee upcoming elections. But critics, pointing to Qadri's ties to Pakistan's army, have voiced fears of a military coup.

Khar characterized the 62-year-old Sufi cleric as representing a small minority outside the political system intent on disturbing upcoming elections.

“It’s preposterous, it’s unconstitutional and he could be arrested for that,” she said.

Khar also discussed Pakistan's relationship with the United States, reiterating comments she made last November that things were on "a positive trajectory," but that the war on terror had been detrimental to Pakistan.

"We have suffered too much and gained too little," she said.

Last week, U.S. President Barack Obama announced plans to quicken the pace of U.S. troop withdrawal from Afghanistan, and an increased role for Pakistan in facilitating peace talks between Afghanistan and the Taliban. Khar called for talks in Kabul — not Washington or Islamabad — to try and bring security to the embattled nation.

On Monday, Pakistan's government took administrative control over its largest province, Baluchistan, which borders Afghanistan and Iran. Last week, a sectarian attack of a billiards hall in the provincial capital left more than 80 dead.

In response to a question from the audience, Khar said there was no evidence that Pakistan had beheaded an Indian soldier in the Kashmir skirmishes. She also expressed disappointment with India's decision to rescind moves to relax visa restrictions between the countries.

"Something which has already been acheived, which has been attained, we are going back on," she said.

Despite recent rhetoric, she said Pakistan remains committed to a dialogue with India to obtain "complete normalization to not only peacefully coexist, but contribute to the development of the region."

Khar appeared at Asia Society last September, offering a very critical take on the "drone war" the U.S. is waging over Pakistani soil.