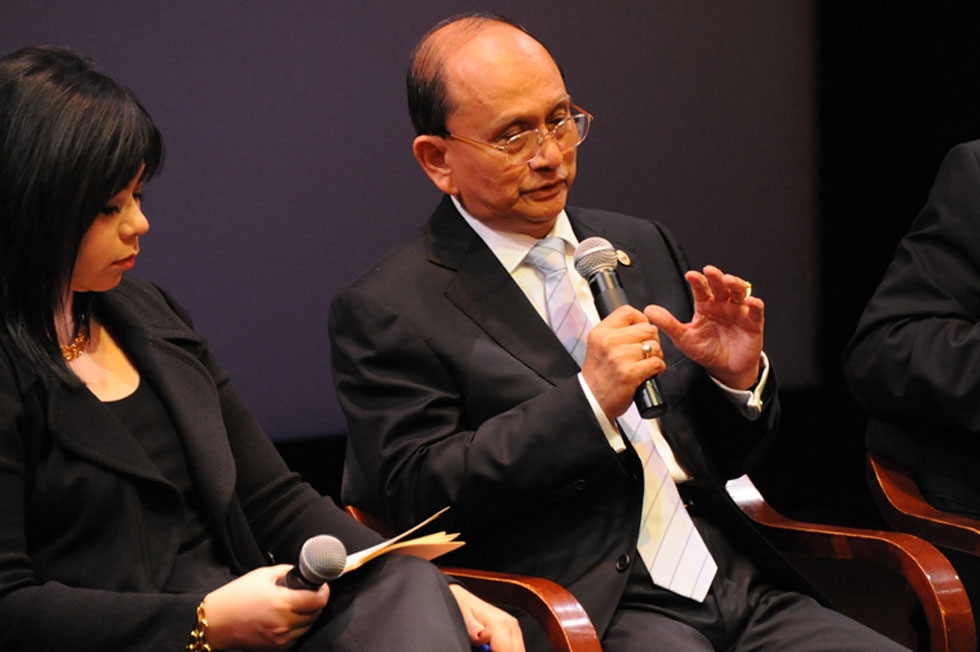 In a landmark appearance at Asia Society headquarters in New York on Thursday, Myanmar President Thein Sein said that his country has left behind its authoritarian government and that the road to democracy was irreversible.

Since taking office in March 2011, Thein Sein has overseen a series of dramatic changes in Myanmar, a country which for nearly half a century had been under military rule.

Following prepared remarks, Thein Sein and representatives from his cabinet fielded questions on a range of issues. When asked about his government’s response to ethnic unrest in Myanmar, he said cease fires have been attained in 10 of 11 clashes with ethnic minorities.

"We plan to achieve sustainable peace," Thein Sein said. "As you all know, the situation in the north is not very stable, the fighting with the Kachin independence army is still going on. The problem is that there are some differences that need to be sorted out. From the government side, we have ordered our troops to stop fighting against Kachin troops. But our Kachin colleagues have not reciprocated in a similar way, so we will have to find a way to reconcile our differences."

Thein Sein's visit to Asia Society followed a highly anticipated announcement by Secretary of State Hillary Clinton that the United States is taking steps to ease its import ban against Myanmar.

"The timing of this announcement is a big win for Thein Sein," said Suzanne DiMaggio, Asia Society's Vice President of Global Policy Programs, who moderated Thursday's discussion with Sein. "He will return from his first visit to the U.S. as Myanmar's president with a major boost to his reform agenda. It's a concrete deliverable that will go a long way towards tamping down critics and hardliners at home."

Thein Sein's visit coincides with an 18-day U.S. visit by Nobel laureate and member of parliament Aung San Suu Kyi, who spoke at an event co-hosted by Asia Society and the U.S. Institute of Peace in Washington, D.C., on September 18.