Clinton: US 'Committed to Standing With' Myanmar Government, People 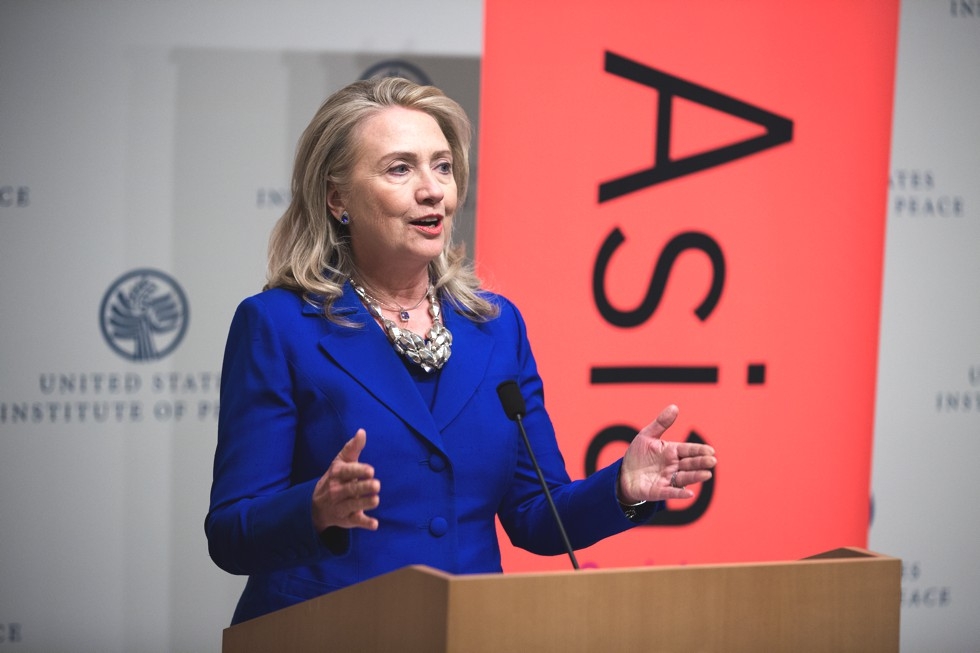 The following is complete text of U.S. Secretary of State Hillary Clinton's opening remarks at Aung San Suu Kyi's first visit to the United States in more than 40 years, an Asia Society event held at the United States Institute of Peace in Washington, D.C., on September 18, 2012.

Well, it's wonderful to be back here at USIP, especially for this extraordinary, auspicious occasion. I want to thank USIP and congratulate Jim Marshall upon becoming president. We certainly look forward to working with you. And I want to thank the Asia Society and Henrietta Fore and all who represent the commitment that started in the 1950s but has certainly stood the test of time, and we very much enjoy working with you as well.

Now the purpose for this gathering is quite an exciting one because we have here an opportunity for someone who has represented the struggle for freedom and democracy, for human rights and opportunity, not only in her own country but seen as such around the world. So it's wonderful to see Suu Kyi back in Washington as a free and forceful leader of a country opening up to the world in ways that would have been difficult to imagine even recently.

Those flickers of progress that President Obama spoke of last — a year ago, summer — have been growing and strengthening in the times since. Hundreds of prisoners of conscience have been released over the past year, including some just this week. Opposition political parties have been legalized and their members have won seats in parliament. Restrictions on the press, and on freedom of assembly, have eased. We've seen laws that have been enacted to expand the rights of workers to form labor unions, and to outlaw forced labor. And the government has reached fragile ceasefires in some long-running ethnic conflicts.

Suu Kyi’s courage and moral leadership never wavered through years of house arrest and persecution. And she and other opposition leaders have now joined with President Thein Sein and the new government to take the courageous steps necessary to drive these reforms.

I have met with the President twice, in Naypyidaw and then this summer in Cambodia. I look forward to welcoming him to New York next week for the United Nations General Assembly. This morning at the State Department, Suu Kyi and I had the chance to talk about the work still ahead, and there is a lot of work. I think one of the important reasons for her visit at this time is to remind us of how much more still lies ahead — from strengthening the rule of law in democratic institutions to addressing the challenges in many of the ethnic conflicts and in Rakhine State. The government and the opposition need to continue to work together to unite the country, heal the wounds of the past, and carry the reforms forward. That is also key to guard against backsliding, because there are forces that would take the country in the wrong direction if given the chance.

So we in the State Department and in the Obama Administration are certainly the first to say that the process of reform must continue. Political prisoners remain in detention. Ongoing ethnic and sectarian violence continues to undermine progress toward national reconciliation, stability, and lasting peace. Some military contacts with North Korea persist. And further reforms are required to strengthen the rule of law, increase transparency, and address constitutional challenges.

But the United States is committed to standing with the government and the people of Burma to support this progress that has begun but is still a work in progress. We've taken steps to exchange ambassadors, ease economic sanctions, and pave the way for American companies to invest in the country in a way that advances rather than undermines continued reforms. And we are in close contact with government and opposition leaders. Our first-ever Ambassador to this new Burma, Derek Mitchell, is here with us today. And he, along with the team that Assistant Secretary Kurt Campbell lead, are not only in constant communication but ongoing consultation with many representatives of different constituencies in Burma so that we can provide the help and support that is necessary and appropriate.

Last December, I had the honor of visiting Suu Kyi in the house that was once her prison, and we talked about many things, including the challenge of moving from protest to politics, from symbol to stateswoman. That is what her country needs from her now. I know a little bit about how hard that transition can be. It exposes you to a whole new sort of criticism and even attack, and requires the kind of pragmatic compromise and coalition building that is the lifeblood of politics but may disappoint the purists who have held faith with you while you were on the outside.

Yet in the months since Suu Kyi walked out of house arrest and into the political arena, she has proven herself to be a natural — campaigning hard, legislating well, and staying focused on what can be done right now and tomorrow and the day after tomorrow to move her country forward.

So I think you are in for a great opportunity this afternoon, as will be many American audiences in the days ahead, as she has a very generous schedule of activities. I, unfortunately, have to depart back to the State Department, but it will be certainly a great pleasure for me now to introduce someone who is not only a Nobel Laureate and a hero to millions, but also a busy member of parliament and the leader of her political party. Please welcome Aung San Su Kyi.