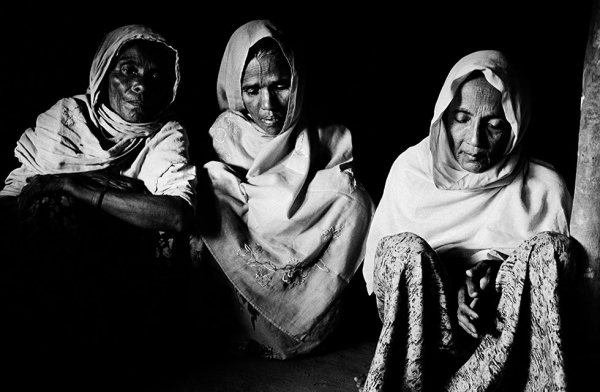 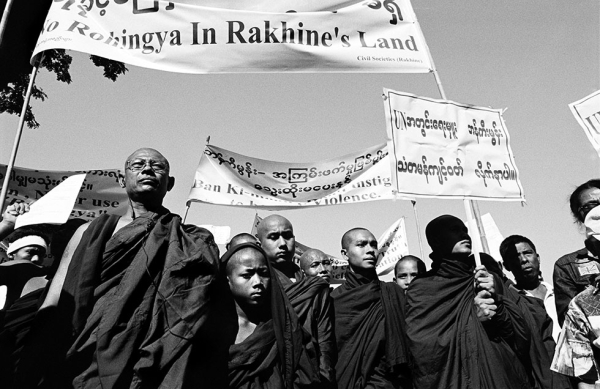 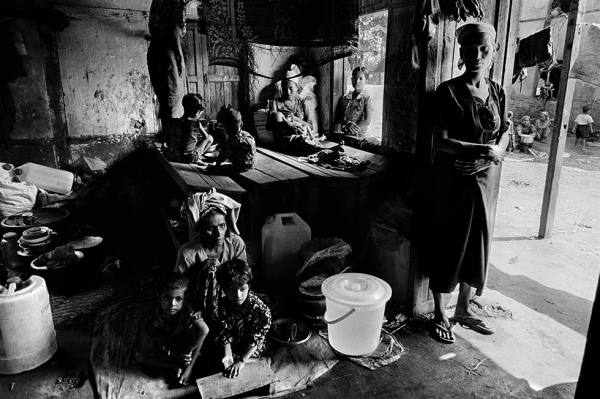 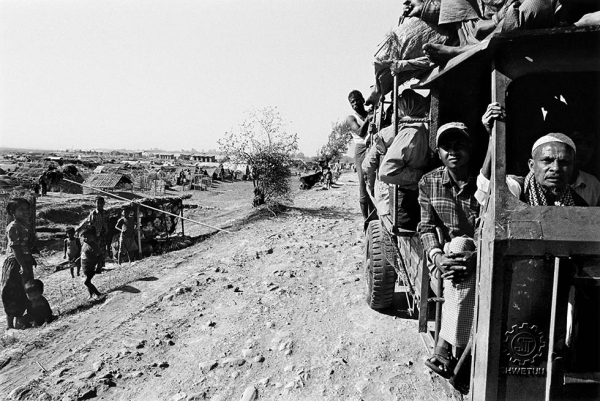 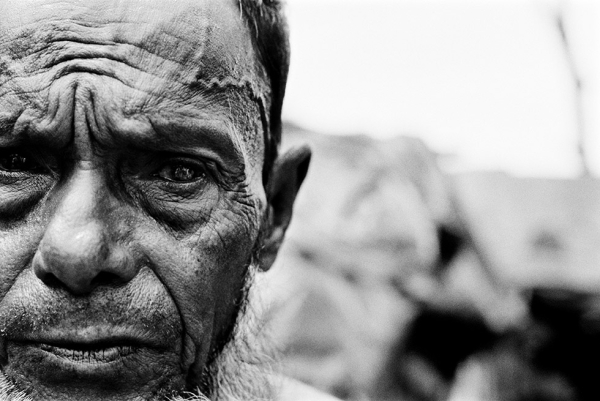 On June 3, Asia Society will award its 2015 Osborn Elliott Prize for Excellence in Journalism on Asia to a team of three Bloomberg News reporters for their coverage on the health consequences of uranium and coal mining in India. Learn more

Greg Constantine is an American photographer who has been based in Southeast Asia since 2005. As part of a long-term project titled Nowhere People, which documents the struggles of stateless minority groups around the world, he has traveled in the Rakhine state of Myanmar, also known as Burma, and in southern Bangladesh to photograph the Rohingya people. This effort has culminated in Exiled To Nowhere: Burma's Rohingya, a traveling exhibition of photographs taken from 2006 to 2014, currently on view at the PowerHouse Arena in New York through May 28. Greg was part of an International Herald Tribune team that won Asia Society’s Osborn Elliott Prize for Excellence in Journalism on Asia in 2009. He recently talked to Asia Blog about his work and the Exiled to Nowhere project.

To date, Exiled To Nowhere: Burma's Rohingya has been presented in a dozen locations around the world. How has the exhibition been received? Do you feel that many people are aware of the plight of the Rohingya?

The response to the exhibition has been incredible. For locations in Southeast Asia like Bangkok, Jakarta, Yogyakarta, Tokyo, and Kuala Lumpur, most people who attend the exhibition are familiar with the Rohingya to one degree or another, mostly in the sense that local media in each of these countries discuss the Rohingya as being “illegal migrants” who have found their way to those countries, mostly by boat. First, “illegal migrants” associates the Rohingya as if they are fleeing Myanmar for economic reasons, which they aren't. They are stateless people fleeing persecution who are seeking asylum. Also, what many people — specifically the public — who have seen the exhibition in these countries aren't fully aware of relates to “who” the Rohingya are and the reasons “why” they are fleeing their home country of Burma, which is one of the primary objectives of my work and this exhibition.

The response that I've received in almost all the locations where the exhibition has been shown is that people walk away with a much better understanding of how complex the story is, a clearer idea of who the Rohingya are, the horror that the Rohingya face inside Myanmar, and an awareness of the legacy of abuse this community has faced for generations in the country. While many people have never heard of the Rohingya before, the abuse of the Rohingya is not a recent development. It's one that has been going on and on now for decades. One common reaction from so many people who visit the exhibition is that they are appalled by what is and has been going on against this community in Myanmar.

Your photographs first came to our attention in 2009, when you were honored with our Osborn Elliott Prize for Excellence in Journalism on Asia for the International Herald Tribune's coverage of Cyclone Nargis. This was one of the only times in the prize's history that a photographer was specifically cited. How do you see the role of the photographer in reporting on disaster zones and crisis situations?

It’s crucial. The role of the photographer is a vital component of the DNA in reporting on disaster zones or crisis situations. More importantly, photography is crucial to covering — and uncovering — stories that aren't about disaster and crisis situations, but are of equal if not more importance for people to be exposed to. Honest, comprehensive, intelligent, nuanced, and hard-hitting visual reportage plays a more important role today than ever. I've always strongly believed that photography is not there to illustrate what reporters are writing. Photography should work with and in parallel to what reporters are writing, but more importantly, photography should stand independently, by itself as a way for people to become aware of stories they need to know about, contribute to the questions they should be asking, and spark debate and discussion.

At what point did you decide to focus on the Rohingya?

I started my long-term project documenting stateless people, Nowhere People, in late 2005. Asia was the launch pad for that project. For anyone who knows about or becomes exposed to the issue of statelessness, it is impossible to ignore the situation of the Rohingya. Why? Because it is one of, if not the largest and most extreme, situations of statelessness and human rights abuse in the world today. And unfortunately, if you talk with almost anyone involved in statelessness, human rights, or Burma-related policy about the Rohingya, almost everyone will say there is no solution in sight.

I first started photographing the Rohingya in early 2006 and have made 12 different trips to Bangladesh and inside Myanmar since then. In early 2006, I was so shocked at the conditions Rohingya were existing in and stories they shared with me of the abuse inside Myanmar — and that almost no one was talking about it — that I knew I would dedicate a long period of time trying to construct a long-term documentation of what was clearly an underreported story of monumental proportion. As the years have progressed, the story has become more and more complex, specifically with the euphoria the international community has had over the perceived changes and reforms in Myanmar. And as each year goes by, I've realized the need to keep going back.

In the nine years since you began photographing this stateless population, have there been any positive developments affecting them?

Sadly, there have been absolutely no positive developments affecting the Rohingya. Even with the increased attention on the Rohingya by the press and policy makers all over the world in recent years, and the recognition of the plight of the Rohingya by governments all over the world, there has been absolutely no improvement in the day-to-day lives of the Rohingya community. Actually, their lives have gotten worse. The situation in Bangladesh has gotten worse. The situation for Rohingya who have fled to other countries for safety and sanctuary has gotten worse and without a doubt, the situation for Rohingya inside Myanmar has gone from awful to utterly abysmal. While there has been so much public attention given to the plight of the Rohingya, and in light of whatever closed door diplomacy has taken place regarding the Rohingya, it clearly hasn't translated down to any sort of improvement in the lives of Rohingya men, women, children, and families anywhere; and there are definitely no signs that any positive change will happen for the Rohingya inside Myanmar any time soon. But that is one of the many reasons why it is so important for journalists to keep covering the story.

Your photography has focused on stateless people not only in South and Southeast Asia but also in Ukraine, Kuwait, the Dominican Republic, Kenya, and the Ivory Coast. How did you become interested in sharing a broader narrative about these populations?

Initially I started my project Nowhere People with the intention of spending one year creating a series of photo essays on stateless people in Asia, but it immediately became clear that this was a global issue that no one was really trying to document comprehensively. The history behind why people have become stateless and the reasons and forces behind why they continue to be stateless is incredibly interesting, and also something people need to be exposed to. Besides the obvious human elements of the issue, statelessness touches on so many massive themes that I think are incredibly relevant to the times in which we live. The issue challenges us to evaluate and really take a hard look at themes like identity, the changing face of citizenship in the world today, conversations about human rights and the nation-state, the overarching power of the state, the impunity states have when it comes to human rights, and the effectiveness of the international institutions and legal mechanisms that have been created to address human rights and the state's involvement in human rights violations.

You've described stateless people as invisible to the global community and your photographs as an attempt to make them visible. How do you gain the trust of your subjects? Are they reluctant to be photographed and to share their stories?

I like to talk with people and interview people, record them talking about their situation and their lives. This usually comes before I take photographs of them. And in that way, I'm able to create a level of trust that opens up enough space and moments for me to be able to work the way I feel I need to. This comes as a result of having time to spend with people and being able to revisit places. I think that when you are able to express your true, genuine interest in wanting to hear someone's story and also try to understand their situation, people will open up to you. Nearly all of the stateless people I have ever met want to tell their stories and want to have their stories heard by people. And even for those few people who don't want to be photographed, they still want to tell their stories, and I want to listen to them because their stories will almost always contribute to my better understanding of the larger story.