Interview: Covering the Plight of Myanmar's 'Stateless' and 'Vulnerable' Rohingya 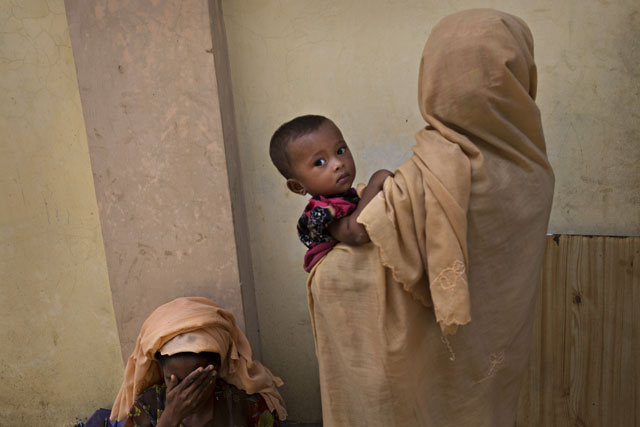 Women wait to be treated outside a clinic in the Dar Paing refugee camp on May 6, 2014 in Sittwe, Myanmar. (Andre Malerba/Getty Images)

For many readers, Reuters' special investigation into the heartbreaking struggle of Myanmar's Rohingya population was likely the first they heard of the ethnic group living in sections of South and Southeast Asia. In Myanmar — a Buddhist-majority state with 135 recognized ethnic groups — the Muslim Rohingya are deemed illegal migrants from Bangladesh, lacking citizenship and all of the basic rights this entails. Jason Szep and Andrew R.C. Marshall led the Reuters team that chronicled the poignant plight of the Rohingya, from their tragic inability to have basic healthcare needs met, to their vulnerability to human trafficking. On June 18, 2014, the Reuters team will receive the 2014 Osborn Elliott Prize for Excellence in Journalism in Asia at a special event at Asia Society moderated by the New Yorker's Ken Auletta.

After being named the winners, Szep and Marshall spoke to Asia Society Policy Institute Associate Director Debra Eisenman about their series and findings.

In one of your pieces on the Rohingya, you note that "despite Myanmar's historic reforms, [the Rohingya] are worse off." What do you think is contributing to this declining situation, given the commitment of the government to realize reform in other areas?

It is true Myanmar is introducing reforms but these do not extend to the Rohingya, whose already-dire conditions have worsened since Myanmar began opening up in 2011. There are a few factors behind this. Myanmar's population appears more emboldened after years of stifling censorship and military controls. Pent-up grievances are being unleashed, including enmity among mainstream Buddhists toward Muslims. Religious intolerance is on the rise. Our series of stories showed one way this was manifest: a hardline Buddhist movement called 969 which, as our stories revealed, had open support from government figures. Rohingya ultimately end up as a key target. They are stateless. They are vulnerable. And mainstream Buddhists consider them illegal immigrants from Bangladesh. Their presence fits a narrative among many Buddhists that the Muslim population is poised to explode and that Myanmar will someday resemble Malaysia, a Muslim-majority country that long ago was Buddhist. This growth in religious intolerance influences government policy. Despite Myanmar's reforms, there is no talk of granting Rohingya citizenship, a step that would give them greater protections.

Myanmar's recent census, although controversial in large part due to the absence of Rohingya on the ethnic identity portion of questionnaire, may show a larger Muslim population in Myanmar than currently realized. In my recent travels to the country, I've heard from NGO and business representatives that the census might reveal this religious group to be 10% or more of the population (compared to the current, official count of 4%). Should we see this increase, what ramifications do you think it might have on religious tolerance in the country and for the plight of the Rohingya?

A dramatic change in the percentage of the population reported as Muslim could fan the flames of religious intolerance and make life substantially harder for Rohingya and other Muslims. We had a hint of this recently when the government proposed a new law requiring anyone who wants to change religion to seek permission from authorities and introducing penalties for proselytizing through "improper influence and persuasion." The new steps appear to be designed in large part to stop Buddhist Burmese women from marrying Muslim men, which would require them to change religions. It is possible we might see ideas like that to move from the fringe of radical Buddhists into the mainstream. In Rakhine State, home of the Rohingya, the government this year expelled Doctors Without Borders, a crucial source of health care for the Rohingya in Rakhine. This cut off of medical care in turn has accelerated an exodus of Rohingya leaving the country, a trip that leaves them vulnerable to human traffickers.

Myanmar's transition is still fragile, and while there are growing opportunities for development, there are many challenges ahead for the country — resolving the long-running conflict/finalizing the peace process, tackling corruption, addressing land rights, and delivering benefits of reforms to the population writ large, among others. Yet, even with these challenges to stability and prosperity at the fore, a new interfaith marriage bill has been sent to Myanmar's parliament. Aside from the 969 movement, what do you think is stoking these religious questions and tensions?

The apparent attempts to legislate in favor of Buddhism may stem from a feeling of insecurity. As some scholars have noted, there is a siege mentality among many Myanmar Buddhists, partly caused by an old prophecy which says their religion will vanish 5,000 years after Buddha's death. Add this to the widespread sense that Myanmar — already a small country sandwiched between two giants, India and China — is being slowly encroached upon by populous Muslim countries such as Bangladesh. Is Buddhism really declining? Is Bangladesh really swallowing up Myanmar? It's hard to say. But many Burmese find this easy to believe, especially when they are told so by radical Buddhist monks, who are eloquent, charismatic and respected figures, particularly in rural communities.

In recent weeks, various news reports, op-eds, and articles have been published in Western media on the Rohingya. What has the reaction to your series been in Southeast Asia — particularly Myanmar, Thailand, and Malaysia? Do you see this issue entering an ASEAN conversation in the future — or is it perhaps declared more of a domestic issue for Myanmar to address?

There has been increasing recognition in the international media that equality for the Rohingya is important to Myanmar's future. Several major Thai newspapers have advocated for greater rights for the Rohingya, but on the whole the issue remains relatively muted in Southeast Asia. The Thai government often describes the issue as a domestic matter for Myanmar. That's how some other ASEAN countries often characterize it. In fact, you could say the plight of the Rohingya is one of ASEAN's biggest humanitarian challenges, and also the greatest test of its unity and diplomatic skills. On all those fronts ASEAN is failing. But many people in government, including the U.S. government, as well as global human rights monitors, have described our Rohingya investigations as definitive, and are looking closely to see what Myanmar, Thailand, and other Southeast Asian countries do next. The Rohingya problem is unlikely to go away — not as long as conditions in Myanmar remain so wretched, and human smugglers can act with relative impunity in Thailand.

Given your time spent in immigration detention and internal displacement camps, what do you see as the way forward for the survival of the Rohingya in Myanmar and for the many who attempt to relocate throughout Southeast Asia?

Granting the Rohingya citizenship in Myanmar could offer an important way forward. The government says Rohingya are Muslim migrants from Bangladesh who arrived during British colonial rule. A 1982 Citizenship Act excluded Rohingya from the country's 135 recognized ethnic groups, rendering them stateless. Bangladesh also disowns them. This forces Rohingya to rely on human smuggling and trafficking networks when they leave Myanmar. It also creates a form of apartheid in western Rakhine State, where Rohingya are forcibly segregated from the population. It is true large numbers of Rohingya come over from Bangladesh illegally. But many more claim ancestry in Myanmar going back generations. They are a large group, about 1.3 million according to the government statistics. A high-level regional discussion about their future also might help. Myanmar, as chair this year of the Association of Southeast Asian Nations, has said it wants to keep the topic of the Rohingya off the agenda. Even countries like Thailand seem reluctant to broach the issue regionally, even though their government has much to gain from helping the Rohingya and making all the allegations of human rights abuses go away.