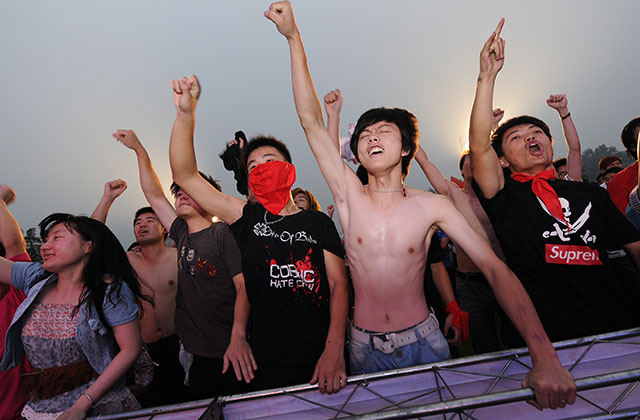 With the speed at which Chinese society had transformed in tandem with its explosive economic growth, the concept of a “generation” is defined much more narrowly than in most parts of the world. Referring to the decade in which one was born, Chinese tend to use designations like “post-80s” and “post-90s.” Many will say that even those categorizations are too broad, with a new generation instead being established every five years (post-85s, post-90s, post-95s, etc).

The youngest cohort now entering adulthood — the post-90s generation — can also be one of the most perplexing. They’ve been tacked with all manner of labels, including open-minded, brainwashed, conservative, materialistic, international, and nationalistic. As with any group numbering in the hundreds of millions, China’s post-90s are unfathomably diverse and defy simple labeling. But when taken as a whole under sociological analysis, some patterns can begin to emerge. “I'm sensitive to generalizations,” said Tom Doctoroff, former CEO of J. Walter Thompson Asia-Pacific. “However, in order to paint a picture, sometimes you need to do broad strokes. We're never talking about black and white, we’re talking about shades of gray.”

Doctoroff, who has been based in Shanghai for nearly two decades, studies consumer psychology and has overseen extensive surveying of “post-90s” Chinese. He spoke with Asia Blog about post-90s individualism in a Chinese context and how he reconciles ostensibly contradictory patterns of nationalism and internationalism among this generation.

China’s post-90s generation tends to be seen as very individualistic compared to the collectivist conformist mindset that marked earlier generations. But you seem to have a different take on this. Can you explain?

I will boldly say that that individualism is a Western concept. Individualism is the encouragement of society to define yourself independent of society. Of course, we are all social animals and we all need to engage with society, but individualism is the encouragement to have an internalized identity, and in China, that still does not exist, even among the youngest generation. Individualism in China should not be confused with ego projection. In China, egos are big, but this ultimately means the demand to be acknowledged by society. So the way that you move forward in China — and this has been true forever and continues to be true — is through a mastery of convention and then clever resourcefulness to adapt that convention, but not rebel against it.

So the admiration for rebels does not exist in China, because when you rebel, you cross the red line into dangerous territory and risk becoming ostracized. This is very true from generation to generation. In simple terms, the willingness for young people to challenge their boss and ask a question in a hierarchal situation has not changed in the 18 years that I have been on the ground in China. So there is no youthful individualism, even for the post-90s generation. There hasn't been that evolution. Ultimately, the desire to climb the social hierarchy remains as trenchant now as it was then, and the anxiety of not living up to expectations is as trenchant now as it was then.

But everywhere you look in China today, you do see young people expressing themselves in ways that would have been unthinkable even a decade ago. There’s a huge range of opinions on all sorts of issues and all sorts of anti-conformist subcultures.

There is subcultural tribalism, but the question is, number one, does that start impacting the broader society? Does it ever begin to penetrate the mainstream? Or does it exist on a shelf out of reach? I think that it does not greatly impact the mainstream. So you don't see an evolution of the mainstream embracin individualism.

The second aspect is, what happens when people get married and start having families and start having careers? Then you see this flirtation with self-identification tend to evaporate a little bit. And honestly, this subculture tribalism is really very small relative to what it would be in a Western society.

So the master insight of Chinese — and this is across age groups and across socio-economic groups — is the tension between, on one hand, ambition and the desire to be acknowledged by society for your contributions to society, climb up the mountaintop, and project your status. And on the other hand, there’s regimentation, which is ultimately making sure that you do not rebel and cross the line. You are quite cautious. So between projection and protection, between ambition and regimentation, standing out to fit in — all of these things haven’t changed, despite the emergence of a post-90s generation.

You do have people whose minds are relatively fresh who want to pursue their own passions to make their mark. And this is very post-90s by the way: “my passion, my mark.” People want to leave that etched in the sand — etched in stone actually. But they're still living in a very old world, a very regimented world. The tension between the desire to leave your mark through who you are and needing to do it in a very traditional environment, that isn't evolving in terms of its structure. 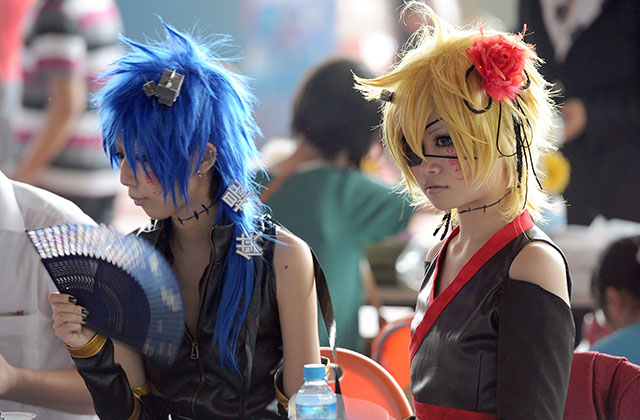 Two Chinese girls attend a cosplay gathering in Hefei, east China's Anhui province on June 26, 2012. Cosplay, short for "costume play," is a type of performance art in which participants don costumes and accessories to represent a specific character or idea, often drawn from popular fiction in Japan. (STR/AFP/Getty Images)

Lately, there’s been talk of “increasing nationalism” regarding issues like South China Sea disputes and President Xi Jinping’s harder line in international relations. And today’s Chinese youth were brought up under the “patriotic education” (established in 1991) that often demonizes foreign countries. Yet, post-90s are known for being China’s most internationally-minded generation. For instance, a Pew survey last year found that 56 percent of Chinese under 35-years-old view the United States favorably, compared to just 37 percent of those over 35. How do you reconcile these dynamics?

I've always described the Chinese relationship with America as “dangerous love.” When you take a look at exposure to the West through new media, the exposure to different types of role models is unlike anything people have seen before. Through television shows and all that, it's unlike anything that has happened in [Chinese] history. Western individualism is very aspirational and seen as very important for innovation and creativity — attributes that are increasingly recognized everywhere in China as important for future success, both at a national and individual level. So America and the West are seen as having the competitive tools to get ahead, and that resonates in a very ambivalent way, both at a national and individual level. America is understood to be have a bottom-up dynamism that does not exist in China, which tends to be top-down patriarchic command-and-control system.

Post-90s want to connect much more with the world than ever before. They want to have a harmonious engagement with the world. But they want to bring back their global experience and global awareness and apply it in a Chinese context. Everything in China is a means to an end and everything has to be applied. Internationalism just for the sake of being a citizen of the world is very abstract. So internationalism is a way of ultimately strengthening Chinese society. People are fiercely nationalistic and patriotic. Because individual identities are underdeveloped from a Western standpoint, the role of the nation and national identity in terms of confidence on an individual level is profound.

If you look at the post-90s generation’s attitudes toward Taiwan, Hong Kong, and Japan, it's amazing in terms of the difference they have regarding Hong Kong, Taiwanese and Japanese people compared to the political conservatism they have regarding those places. That is just basically one more indication that they're open to a broad range of experiences, but when it comes to bringing it back in terms of the political and societal context, they still have to fit in and advance within. 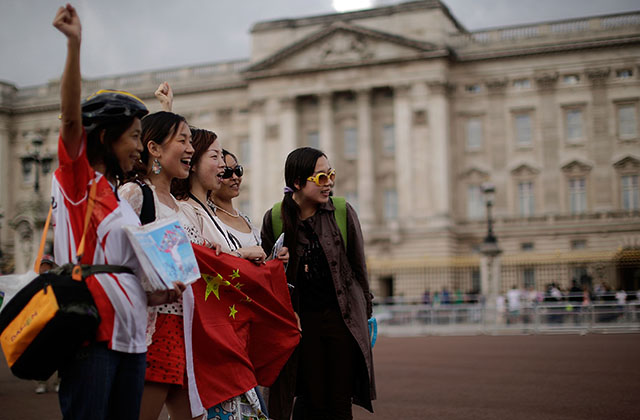 So in some sense, even at an individual level, internationalism is primarily utilitarian?

That doesn't mean that people aren't human beings and don't enjoy engaging with different cultures and don't enjoy traveling. But even when you travel and when you gain new experiences going abroad, that needs to be converted into social currency for yourself — on social networks, for example. So even if you take a look at the hierarchy of travel experiences, there really is a path that you go on to demonstrate your internationalism. It’s a reflection of yourself as a new citizen of the world, and therefore with a certain competitive advantage.

At [J. Walter Thompson], we did a survey on the attitudes of online identities with millennials in China. It found that the percentage of post-90s Chinese who view a gap year as a positive learning experience is much higher than with post-80s. But the way that people talk about the gap year is not as an experience, it's as an investment in the future.

Post-90s are often labelled "digitally native," but there’s been quite a range of digital resources that different cohorts within the post-90s generation came of age with. First Renren (established in 2005) was dominant, then Sina Weibo (2009), and now WeChat (2011). Do you think these respective platforms and the way they enable social engagement has led to differences in the way sub-generations of post-90s have been influenced?

The relationship that Chinese have with the online world is different than it is in the West. Long story short, young people in China use the internet as much more of an emotional engagement with their own identity. They feel they have opportunities to express themselves in ways that they never could in the real world. So they want to liberate who they are or who they aspire to be in a safe way without coloring outside of the lines. That's why the internet is so powerful for Chinese — because it's virtual and it's relatively anonymous and safe.

If you take a look at WeChat, the huge difference — in addition of course to its utilitarian commercial transactional integration — is that it’s safe. It's safe in terms of who sees what you do, it's safe in terms of who you engage with and how you engage with them, and it's even safe in terms of all the tools you have in order to make sure your image curated by yourself as you want. So I think the combination of your ability to project who you are but still in a very safe environment probably gives the post-95 generation more security in terms of who they are as people, and more a sense of me. Now again, when I say a sense of me, I'm not saying it in an individualistic sense. I'm talking about confidence in who I am and as I project it onto a social stage.

This interview has been edited for length and clarity