Interview: Joe Wong on Intercultural Stand-up and Young Chinese 'Wanting to See Something Real' On Stage 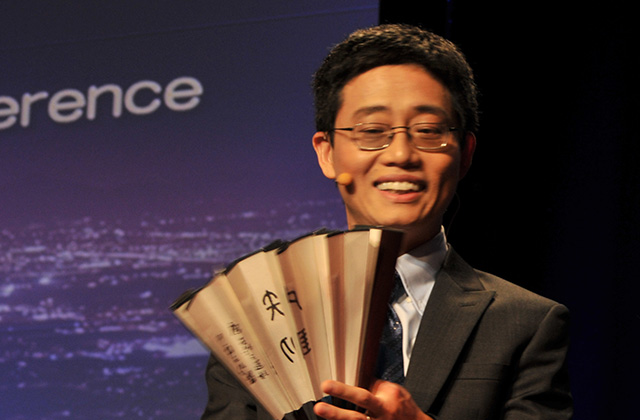 Since first moving to the U.S. as a biochemistry Ph.D student in 1994, Chinese American Joe Wong has taken an unlikely career trajectory. While working for a pharmaceutical company screening cancer drugs in Boston after graduation, he started developing a knack for writing jokes. After years on the local comedy scene, he eventually landed appearances with David Letterman and Ellen DeGeneres, and most famously, he roasted Vice-President Joe Biden at the 2010 Radio and TV Correspondents’ Dinner. Now living back in China, Wong hosts a MythBusters-like television show on CCTV and goes on regular standup tours (though his professed dream job of working on TV announcing losing lottery numbers still eludes him). He spoke to Asia Blog about cross-cultural themes in his routines and the growing audience for standup in China.

Your identity has been a big theme in your comedy, whether it’s the Chinese immigrant in America or the haigui (Chinese returning from overseas) back in China. How distinct do these identities actually feel to you in those respective countries?

My identity adds flavor to my comedy. Identity is never the main course, but gives a comedian an angle to look at a society and people’s attitudes and generate comedy. Both identities are distinct for me and I have to acknowledge them in my comedy. However, my immigrant identity in the U.S. is stronger, because I can’t hide it. My look and my accent don’t allow it.

After your roast of Joe Biden, there was a lot of talk about how standup comedy didn’t really resonate in China. How has that changed in the five years since then?

When I first arrived in China in 2013, my comedy career was almost pronounced dead on arrival. People said, “Joe’s humor is only fit for America, it’s never going to work in China.” What I immediately did after arriving was to go to the clubs, schools, and even community centers and tell jokes. I wanted to find out what works and what doesn’t in China.

Now I can say with certainty that standup comedy has gained a foothold in China. I have toured in both the U.S. and China, performing more than 20 Chinese language standup comedy shows in theaters. Most of these theaters house 1,000 or more people. The TV show I host in China also has millions of viewers per episode.

Those from the post-90’s generation were a lot better off economically growing up and they have more choices and less fear. For example, if there is only $200 left, people of my generation would think about how to budget. The post-90’s people would spend the money to have a good time and make themselves feel better.

Have you ever gotten feedback from a fan that really stuck with you?

My favorite feedback so far came from a theater-goer in China who said, “Joe’s live (Chinese) show is a lot more fun than his performance at the Radio and TV Correspondents’ Dinner [roasting Joe Biden].” People in China know me from the performance at that dinner; this comment makes me feel that Chinese standup comedy is being appreciated by folks here.

What’s the question you keep hoping a journalist will ask you? And how would you answer it?

This is the best question a journalist ever asked. The question I’d love to answer is: “What would you like to see happening next in your comedy career?” My answer would be to have a comedy TV show or movie that is successful in both the U.S. and China. I always dream about having a hit show in both countries that doesn’t involve Kung Fu.