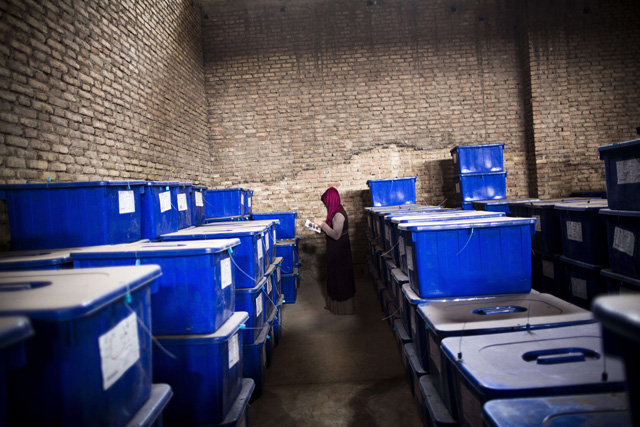 Afghan election employee, Forouzan Barez checks the plastic boxes containing election material at a warehouse prior to transportation to the polling centers, in the northwestern city of Herat on April 3, 2014. (Behrouz Mehri/AFP/Getty Images)

Before we cast our votes on April 5, I hope my fellow Afghans will take a moment to grasp the magnitude of this historic election. For the first time, political power will be transferred from one elected president to another through a democratic process.

Moreover, we will also be fulfilling one of our key commitments at the 2012 Tokyo Conference — successfully conducting a comprehensive, transparent, and credible election in order to ensure the continuation of international aid to Afghanistan. Given that the Taliban has vowed to “use all force” to disrupt the elections, that task has only become even more challenging. Case in point: the suicide bombing outside of the Afghan Interior Ministry on Wednesday, April 2, that resulted in the deaths of six police officers.

Afghanistan is still heavily dependent on international aid, as its annual domestic revenues stand at about $2 billion, which accounts for only 35 percent of the national budget. The international community committed $4.3 billion annually for the Afghan national security forces and $16 billion to socio-economic development, respectively, at the Tokyo Conference and the NATO Chicago Summit in 2012.

However, the withdrawal of the International Security Assistance Force by the end of 2014 and the pending Bilateral Security Agreement with the United States are jeopardizing the commitments made in Chicago and Tokyo. In addition, the uncertainty surrounding the current elections is jeopardizing the Afghan economy as investors and middle-class citizens are taking their money out of the country.

On top of those concerns, currently more than 50 percent of the national budget is allocated for security, which means less money is available for education, health, social welfare, and infrastructure. Unless the security budget is lowered in a significant way going forward, Afghanistan’s transition to its declared “Transformation Decade” (2015-2024) won’t be fully realized. A new president and administration who are viewed as legitimate would be better equipped to negotiate for peace with the Taliban from a position of strength.

Because a key condition for the continuation of international aid is a comprehensive, transparent and credible vote, Afghanistan literally cannot afford to have an election which is seen as fraudulent. The first step to Afghanistan’s path to peace, stability, and socio-economic development, therefore, depends on our ability to safeguard the credibility of the April 5 vote.

I am banking on the last-minute rush to register for voting cards and the surge in new voter registrations — 3.8 million, according to Afghanistan’s Independent Election Commission — to make sure that this historic event isn’t hijacked by forces inimical to the country’s first democratic transfer of power.

Ameen Habibi is a member of the 2013 class of Asia Society’s Afghanistan Young Leaders Initiative.