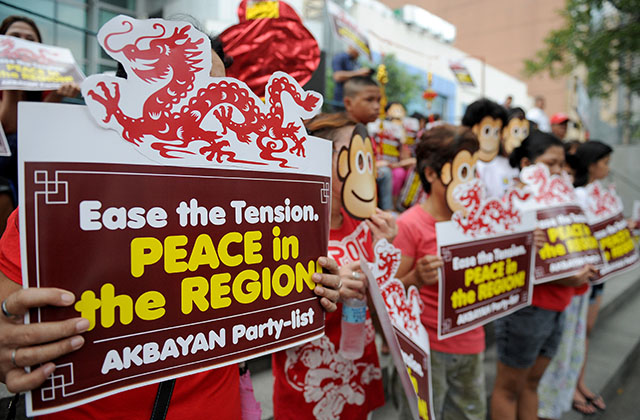 Activists wearing monkey masks display placards during a rally against Beijing's island-building in the South China Sea, ahead of the year of the monkey at the Chinese consulate in Manila on February 5, 2016. (Jay Directo/AFP/Getty Images)

In July, the Permanent Court of Arbitration in The Hague ruled on an arbitration case brought by the Philippines against China over conflicting territorial claims in the South China Sea. The tribunal found that in accordance with the United Nations Convention on the Law of the Sea (UNCLOS) — to which both countries are signatories — China’s extensive claims have no legal basis. Chinese leaders and media reacted with fury.

On October 4, Asia Society in San Francisco will present a conference examining South China disputes, how they're influencing domestic and foreign policy in claimant countries, and what role the U.S. and China are playing. Learn more

Though the United States has not ratified UNCLOS, it has called on China to abide by the convention. Even before the ruling, the U.S. military had been sailing through and flying over disputed South China Sea waters in periodic “freedom of navigation” patrols.

Yann-huei Song is a research fellow at the Institute of European and American Studies, Academia Sinica with a focus on ocean law, maritime security, and disputes in the East and South China Seas. On October 4, he will appear on a panel at Asia Society in San Francisco titled "Making Waves: Contested Waters in the South China Sea." Ahead of the event, he spoke with Asia Blog about new developments since July's ruling and how the American posture in the South China Sea may be shifting.

Should the U.S. ratify UNCLOS, and what would the implications be if it did?

It would solve a lot of problems — in particular, the credibility problem. When the United States is trying to deal with maritime disputes, in particular in the South China Sea, it challenges other countries' position by saying that they have to abide by UNCLOS and follow the rule of law. But it is not a party to that convention. If the U.S. wants to have leadership in maritime affairs and policy, this convention should be ratified. Ratification would also help from the military sector perspective and from running freedom of navigation exercises.

Within the United States, you also have environmental groups that want the U.S. to join, since global climate change, the sea level rise, and a lot of other ocean issues are related to this convention.

Though China has been mentioned fairly often by U.S. presidential candidates, South China Sea disputes and the prospect of joining UNCLOS haven’t really been issues in the election. Should they be?

Escalation and tension in the South China Sea has kind of been reduced since the July tribunal decision was issued. Not many countries have really exerted pressure on China to comply with the ruling. Right now it seems that China is going in the direction of cooperation or negotiation with ASEAN (Association of Southeast Asian Nations) member states. That's why this past summer we didn't see the arbitration case mentioned in the joint communiqué or in the chairman statements of the ASEAN summit, the ASEAN Foreign Ministers Meeting, or the East Asia Summit.

Even President Barack Obama himself, when he gave an address to the U.N. General Assembly, did not mention anything about the arbitration case or call for China to abide by the ruling. He just said that “in the South China Sea, a peaceful resolution of disputes offered by law will mean far greater stability than the militarization of a few rocks and reefs.” That was it.

So the South China Sea issue I think is calming down. Unless something happens, like China doing more reclamation work or some kind of conflict erupting, I don't think it will become a hot issue for the two candidates to debate. If Hillary Clinton becomes president, I think the chances of the U.S. becoming a party to UNCLOS will increase, but for Donald Trump, I'm not quite sure. [If he is elected], it seems to me the change [in South China Sea policy] will not be big.

Do you think The Hague ruling had or will have any effect on U.S. involvement in South China Sea disputes?

If you look the G7, G20, and 4th ASEAN-U.S. Summit, President Obama did try to emphasize the call asking China to comply with the ruling. But recently, something has changed because even the [White House] National Security Council ordered Pentagon leaders to strike out the term “great power competition.” It’s trying to reduce that kind of competitive talk in Sino-American relations, which means they want to move toward more cooperation with China. That could have a number of implications.

Right now China is trying to follow the dual-track approach of dealing with the maritime disputes with the rival claimants and also doing some multilateral cooperation with ASEAN. By mid-summer next year, China and ASEAN are probably going to adopt a framework for a code of conduct in the South China Sea, establish hotline communication, rescue at sea, and so on.

So if the U.S. is going to follow the order of the National Security Council not to use the inflammatory phrase and move toward more cooperation, then maybe the U.S. can suggest that the dispute is settled through bilateral negotiations and the United States can promote more cooperation on aspects of UNCLOS like illegal fishing issues, climate change, environmental protection, and so on. If that's the case, we are probably going to see better development regarding peace and stability in the South China Sea.

What influence could newly-elected Philippine President Rodrigo Duterte have on the maritime disputes with China?

He's playing a role of wild card. He is going to China in mid-October and we may see some interesting developments in the outcome of bilateral negotiations between China and the Philippines. The two presidents — Duterte and Xi Jinping — can reach some kind of understanding or compromise and ignore the tribunal's ruling, and that will help to move forward regarding China-Philippines relations, and also with ASEAN member states.

Next year, the Philippines will become the chairman of ASEAN and a series of ASEAN meetings will be held there. So the Philippines will have an important role to play. The code of conduct between ASEAN and China will probably be in the framework adopted and there will be more cooperative bilateral or multilateral projects in the South China Sea.

In my personal opinion, China will probably try to abide by The Hague ruling without actually saying that it will comply with the ruling. China has vowed “no acceptance, no participation, no recognition, and no implementation” of the decision and said that it's just a piece of trash paper. But in my understanding, under the table, China will try to comply with the ruling by taking the dual-track approach.

It seems the page has been turned at least halfway over — not totally; it’s subject to further development maybe from now to the end of this year and the outcome of the U.S. election. The Hague ruling seems to have had a positive impact, but that is subject to progress in bilateral negotiations between China and the Philippines. And even the United States right now is trying to strike out the “great power competition.” After the election, if Hillary Clinton becomes president, I think it will strive to maintain the status quo in accordance with the American national interest.