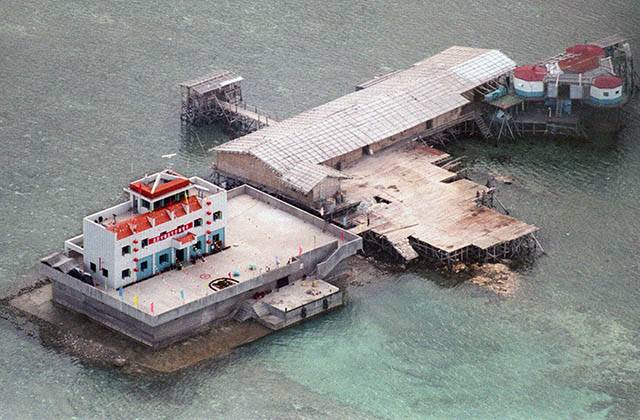 A Chinese base built in 1995 stands in Mischief Reef of the disputed Spratly Islands in the South China Sea. (Romeo Gacad/AFP/Getty Images)

In coming weeks, the Permanent Court of Arbitration in Hague is expected to deliver its decision in a case brought by the Philippines to settle contested island claims with China. The case comes as China has taken increasingly bold actions in recent years to assert maritime claims in the South China Sea disputed by Southeast Asian nations — actions including the construction of island bases for military purposes, and confronting foreign ships and aircraft that travel in the region.

On June 23, former Chinese Ambassador to the United States Li Zhaoxing will speak at Asia Society in New York to give a view from Beijing on the South China Sea disputes. The event will be live broadcast online.Learn more

China’s claims reach deep into the South China Sea. On maps of the area, Beijing has demarcated what’s known as the “nine-dash line” (pictured in green in the below map), a boundary that brushes up near the Vietnamese, Philippine, Bruneian, and Malaysian coasts. China hasn’t specified exactly what privileges it’s entitled to under the nine-dash line, but asserts “historic rights” over the area. This position has encountered stern opposition from rival claimants and the United States for violating freedom of navigation tenets outlined under the United Nations Convention on the Law of the Sea (UNCLOS), to which China and all other parties (but not the U.S.) are signatories. China has expressed that it will not abide by the outcome of the Hague arbitration case.

In 2014, BBC journalist Bill Hayton, formerly based in Southeast Asia, published the book The South China Sea: The Struggle for Power in Asia, which gives historical and contemporary context to the disputes in the region. In an interview with Asia Blog, Hayton discussed the thinking behind China’s claims, and how Beijing might be rethinking part of its strategy in enforcing them.

Why does China care so much about these tiny uninhabited islands in the South China Sea?

Then there are various strategic imperatives. I think they are concerned about the security of the coastal cities and would like a kind of buffer zone around them. They're concerned about the safety of supply routes. And I think another very important factor is the likelihood that the Chinese nuclear submarines might want to hide in the South China Sea, so their Navy wants a “bastion” to keep out potential adversaries and their anti-submarine warfare equipment. But that's not the whole story.

I think everything is predicated on a sense of ownership — that since the 1930s really, China’s elite have convinced themselves and the population that they are the only rightful owners of the features in the sea. Along the way, that's gotten twisted into an idea that they are, to some extent, the rightful owners of the waters within the “nine-dash line.” What I've tried to do in my research is show that this is not some ancient claim, but was the response to things that happened in the 20th century.

No Chinese official ever went to the Spratly Islands before December 12, 1946, as far as we can tell. They were in the Paracel Islands as early as 1907, and then stuck a flag in at least some of the islands in 1909. But the Spratlys — there was no interest by any Chinese officials in administering or occupying those islands until they got there in the 1940s. The nine-dash line was drawn back in 1947 and it was clearly a cartographic convenience — it didn't have any historical meaning whatsoever, but it's now sort of become an article of faith. In terms of a claim to historic rights in the waters within the nine-dash line, I would say that probably only appeared in the mid-to-late 1990s. So these are not ancient claims by any means; they're relatively modern.

A survey conducted in 2013 found that 83 percent of people in China see South China Sea disputes as a continuation of the “Century of Humiliation” (1840-1949), even though none of the South China Sea countries contesting China’s claims were transgressors during that period. Why do you think that is?

There is a sense that emerges out of the chaos of early 20th century China that the country was stripped of its rights and lands by foreign powers. There’s this whole genre of maps of “national humiliation” that were published in the 1920s and 1930s to show the population how much land had been stolen by Japan, France, Britain, and other countries. Some of these maps included great lines that went huge distances — as far as Iran and Afghanistan and the whole of Southeast Asia.

My thought is that during the rest of the 20th century, with land boundaries, there were powers that pushed back, so China was obliged to make agreements with those countries and settle the land disputes. But on the sea boundaries, there was no pressure to reach a deal and no one pushing back constantly. The dream that these little islands are rightfully China's was never challenged.

There’s a narrative that the Century of Humiliation won't be complete — certainly until Taiwan is returned to the motherland — and the problem is that these little tiny specks could be put into the same category as Taiwan. China has already regained control of Hong Kong and Macau, and if one starts to see it put the Spratlys in the same category as Taiwan, then we have a problem, because there's a real mismatch between the Chinese sense of entitlement and the historical evidence of a shared sea. It's never been an exclusively Chinese sea or exclusively anybody's sea. It's always been a shared sea, and that's really what I've tried to argue. When you look at the history as neutrally as possible, it's the shared history that's the most significant feature, and that's what it should be again. 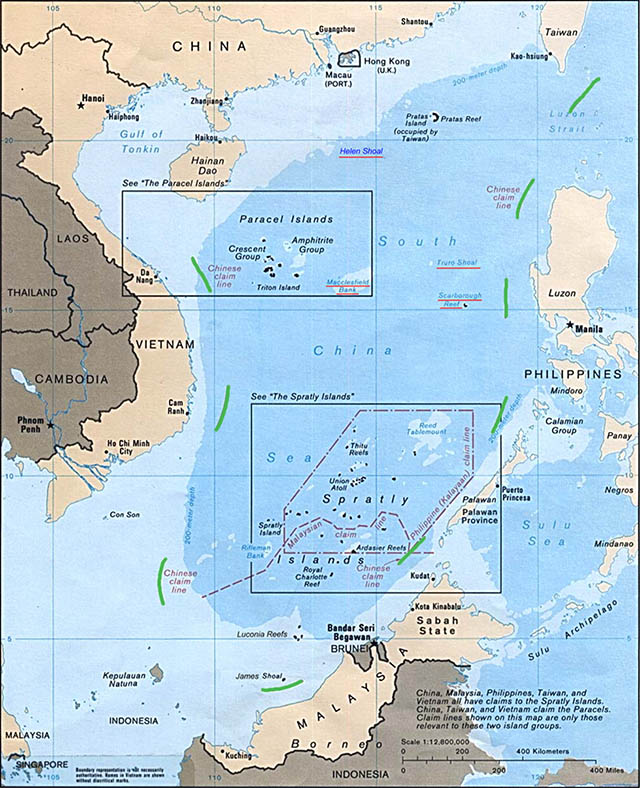 China’s actions in the South China Sea appear to be pushing a lot of its neighbors further into the arms of the United States. For instance, the U.S. recently lifted an arms embargo on Vietnam that’s been in place since the end of the Vietnam War. Do you think this is making China reassess its strategy at all?

China has said it isn’t going to withdraw from any of the bases that it has built, but there has been a dialing down of confrontation in general in the past two years. Two years ago, we had Vietnamese and Chinese coast guard vessels ramming into one another out at sea, and we've seen nothing like that since.

Another thing to point out is that China hasn’t attempted to drill for oil in any disputed areas. They've kept their actions very much on their side of any kind of notional medium lines. Despite the rhetoric, one is seeing a slight moderation in China's behavior. With the exception of these recent fishing incidents, and of course the enormous island building, there has been very little for other countries to actually complain about in terms of new moves pushing people back.

This may simply be the calm before the storm. Maybe once they finish the bases on these artificial islands, China may make some dramatic move. But it might also be that it’s gotten to a point where they've understood that their actions are provoking a reaction, and now they're reining themselves in. I have no inside knowledge of this, but there's a recent article by Zack Cooper and Jake Douglas that argues that it did look as if China was preparing to build on Scarborough Shoal but was deterred by the U.S. deploying A-10 aircraft to the Philippines and giving some fairly strong diplomatic warnings. That’s not to say they won't try again in the future, or that they are going to give up their claims to Scarborough Shoal. But maybe there is a sort of retrenchment or rethink on the Chinese side.

Recently at the Shangri-La Dialogue in Singapore, Chinese Admiral Sun Jianguo said in reference to South China Sea disputes: “We do not make trouble, but we have no fear of trouble.” Do you think that second part is true? Is China really prepared to engage in armed conflict over these islands?

I see these rather hawkish statements as a return to that kind of "public diplomacy" that we saw two to three years ago when you had pundits on TV and uniformed political commissars from the army saying blood-curdling things about "killing the chicken to scare the monkey" or "when those oil fields are towers of flame, who will be sorry?" and "The South China Sea will resound to the sound of cannon shots." All of these bellicose statements were coming out, but they seem to be clearly intended to intimidate and give the impression that China is prepared to use force, when I don't think it was ever intending to actually do that. It was a way of trying to scare people.

I would put the admiral's comments in the same category — he's trying to indicate resolve to the U.S. and he's trying to suggest that China can impose costs on the U.S. It's the classic phrase: "To win without fighting." But I don't think it's going to be taken seriously because I imagine the U.S. navy still thinks it can impose severe costs on the Chinese navy if it ever came to something. But it's in no one's interests to actually stir up a fight. The consequences would be so awful.

Is there anything you think is commonly misunderstood about the South China Sea disputes?

And I think people often think of this as a rational fight over resources, but I think one has to insert the whole Chinese view of history in there. If their view of history is that “this is all ours,” then UNCLOS (The United Nations Convention on the Law of the Sea) is no longer a neutral tool to arbitrate disputes, but is a political weapon wielded against China, and that's clearly how they're approaching the Hague tribunal arbitration at the moment in terms of what they're saying about it. So I think everyone has to understand the Chinese perspective, but at the same time critique it from a position of evidence and assert over and over again that China has never been the exclusive owner of the South China Sea, regardless of what it says in Chinese textbooks. It's always been a shared space.