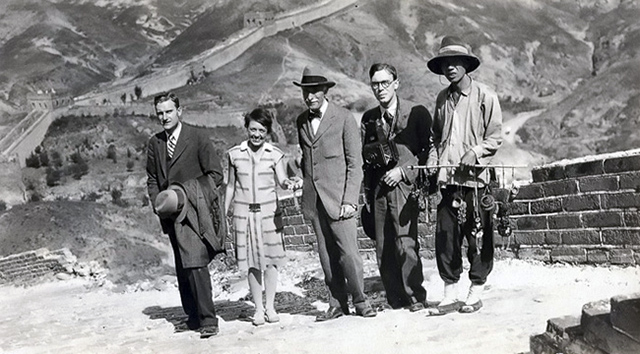 In 1929, just after graduating from Princeton at age 23, John D. Rockefeller 3rd embarked on an international journey that took him to North Africa, Europe, the Soviet Union, and finally — via Siberia — to Japan, Korea, and China. Rockefeller was accompanied on his trip by James G. McDonald, chairman of the Foreign Policy Association, who was gathering material for newspaper articles and radio talk show appearences. According to A Passion For Asia: The Rockefeller Legacy, Rockefeller filled three books with notes and "made important personal contacts with heads of state, royalty, diplomats, and American businesspeople; he met peasants, soldiers, and even warlords." The trip reportedly left a huge impresson on Rockefeller, who was "captivated" by the respective Asian cultures. It was the first spark that would lead to him to establish Asia Society more than two decades later with the mission of promoting greater knowledge of Asia in the U.S. In the above photo, Rockefeller poses on The Great Wall of China with some acquaitances during the 1929 trip.