The Risks and Rewards of President Trump's North Korea Strategy 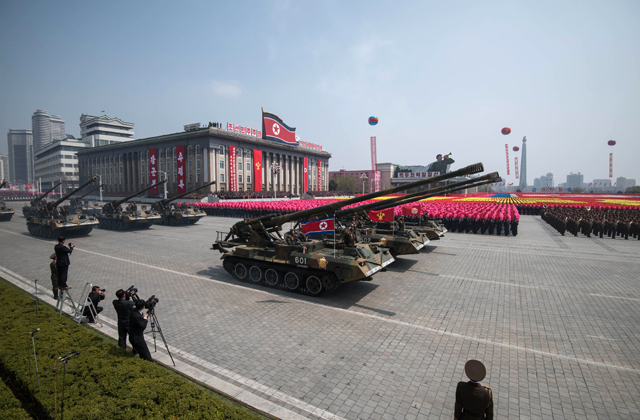 The relationship between the United States and North Korea — adversarial at the best of times — has recently grown significantly worse. Over the weekend, the so-called hermit kingdom paraded military equipment during a national holiday celebration and tested, without success, a new missile. In response to these provocations, U.S. Vice President Mike Pence warned Pyongyang not to "test [President] Donald Trump's resolve."

The diplomatic crisis involving North Korea's nuclear program, now in its third decade, remains as far from resolution as ever. To get a more in-depth look at the key issues, Asia Blog caught up with Lindsey Ford, the director of Asian Security at the Asia Society Policy Institute as well as the institute's inaugural Richard Holbrooke fellow, for a brief conversation about each of the players in the crisis and what may happen next. The conversation has been edited for length and clarity.

What’s perhaps most notable thus far is the degree of continuity between elements of this approach and the “strategic patience” strategy the Trump administration eschews. The ultimate goal remains the same — denuclearization of the Korean peninsula. The Trump team has been very clear that they are not interested in talking about a “freeze” or acceptance of North Korea’s program but remain focused on securing a nuclear-free peninsula. Second, the general tactics appear similar: raising the economic costs on the Kim regime through increased sanctions and a greater effort to get China to exert its leverage over the North Korean economy.

There are nonetheless differences emerging in a few areas. First, the Trump administration has been more vocal about keeping military options on the table. The recent strikes in Syria and Afghanistan were not only about the immediate impact on those theaters but were also clearly intended to send a wider signal about the administration’s willingness to take decisive military action. Vice President Pence referenced these strikes while traveling in South Korea this weekend, pointing to them as evidence of the administration’s “strength and resolve” and suggesting North Korea would be wise not to further test this resolve. Part of the strategy appears to be to create growing anxiety in the Kim [Jong Un] regime (and possibly in Beijing as well) about the heightened potential for U.S. military action in order to incentivize a return to the negotiating table. Whether this strategy will succeed or whether it risks convincing Kim to move even more quickly to secure the nuclear bargaining chips he believes he needs remains to be seen.

Second, the Trump administration appears to be more willing to openly barter with China in return for greater cooperation on North Korea. The president has stated that he essentially offered Xi Jinping an easier deal on trade in return for China’s cooperation in cracking down on North Korea. This is a notably different approach from previous administrations, both Republican and Democratic, which were quite adamant about keeping the North Korea issue separate from other bilateral priorities. They argued that China should provide greater cooperation on North Korea because it is an issue of shared interest, not because the United States would be willing to trade away other priorities in return.

What other concessions might Trump be willing to make to China in order to get a deal on North Korea?

The upside of the president’s offer is that it shows that he recognizes that dealing with North Korea must be a top priority. But this particular strategy — offering China trade concessions in return for greater cooperation — is both risky and worrisome on a few fronts. First, it reinforces a growing concern for U.S. allies and partners in the region that U.S. foreign policy has become transactional. This, in turn, raises questions about what other issues and priorities the administration might be willing to put on the table with China; Taiwan, the South China Sea, defense of the Senkakus? Other countries have long-standing fears that the United States and China, as the two biggest actors in the region, might start cutting side deals that would undermine these other countries' interests. This type of talk only reinforces those fears.

The second question about this approach is one of expected outcomes. Will China be willing to tighten the screws enough to make the expected payoff worth what we are potentially willing to offer them on trade issues? In essence, are we confident the United States will actually get a good deal here?

And finally, a related question for the president would be how this will play at home. The obvious concern for many domestic constituencies will be the specifics of this offer — in which precise areas would the president be willing to make concessions and what would that mean economically? What about all of his campaign promises to get tough on China, promote “fair trade,” and address our large bilateral trade deficit? The administration has suggested the president was not suggesting specific tit-for-tat trade concessions in return for cooperation on North Korea, so we’ll have to see how this plays out. But it is certainly an approach that will raise some concerns abroad and here at home.

What, if anything, might deter North Korea to reduce or give up its nuclear weapons program? How analogous is this situation to the landmark Iran deal in 2015?

The truth is we simply don’t know what might be sufficiently compelling to induce North Korea to give up its nuclear weapons program, or even if that goal remains viable. There are growing voices within the expert community who believe that goal may no longer be achievable and that Kim Jong-un will not trade away his nuclear program at any cost.

There does appear to be significant agreement on the issue of Kim’s ultimate goal. His top priority is clearly regime survival and the perpetuation of the Kim dynasty and he appears to have made an assessment that North Korea’s nuclear program is the one thing that will achieve this goal and protect the regime from outside intervention. The real question in terms of the way ahead for U.S. policymakers is, therefore — can you change that calculus? Are there both carrots and sticks you can offer to de-couple the issue of regime survival from the nuclear program? For example, how can the United States sufficiently raise the costs of the nuclear program to convince Kim it is no longer helpful to the survival of his dynasty? And on the flip side, at some point are there things the United States is willing to put on the table that would provide positive inducements to also help convince him the nuclear program could be set aside? These are the types of propositions the administration will try to test with its new strategy.

I don’t think there’s a neat analogy between the situation we face in North Korea today and the one we faced leading up to the Iran deal. On one level, yes, the calculus is similar — raise the costs of the nuclear program through both economic and military means in order to compel the regime to return to negotiations. But there are really important differences between the two cases, in terms of the economic pressure points, in terms of who holds the cards on economic leverage, and regarding their respective political leadership.

How would you assess the likelihood that China will agree to lessen or halt its material support of North Korea?

It’s really hard to say at this point. We’ve seen some indications that China appears to be taking the North Korea threat more seriously. Most notably, they were cooperative in reaching an agreement on enhanced U.N. sanctions in late 2016. Their announcement in February 2017 about suspending coal imports from North Korea could perhaps be a sign that China is willing to start enforcing these sanctions more seriously and tightening the economic screws.

But we also shouldn’t over-interpret that step. We know that in spite of existing sanctions, Chinese trade with North Korea was actually up significantly in the first quarter of 2017. So the real question is whether their recent actions reflect a material change in China’s strategy toward North Korea or whether it’s more about optics.

Do you see the Kim Jong Un regime as a rational actor using the nuclear issue as leverage to stay in power? How might his attitude about nuclear weapons differ from his father and grandfather?

I don’t think it’s accurate to assume that Kim Jong-Un is not a rational actor. Just because he’s dangerous and engaging in provocative activities doesn’t mean there isn’t a logic to his actions. While I think the desire for a nuclear deterrent was passed down from Kim Il-Sung and Kim Jong-Il, the degree of commitment to the nuclear program seems to have deepened over time. If anything, global events of the past decade have probably served to strengthen Kim Jong-Un’s belief that the nuclear program is the key to his survival. If you look at places like Iraq, Afghanistan, and Libya, the view from Pyongyang may be that the real mistake those leaders made was not having a nuclear deterrent to prevent foreign military intervention.