Why the U.S. Can't Solve the North Korea Crisis Without China's Help 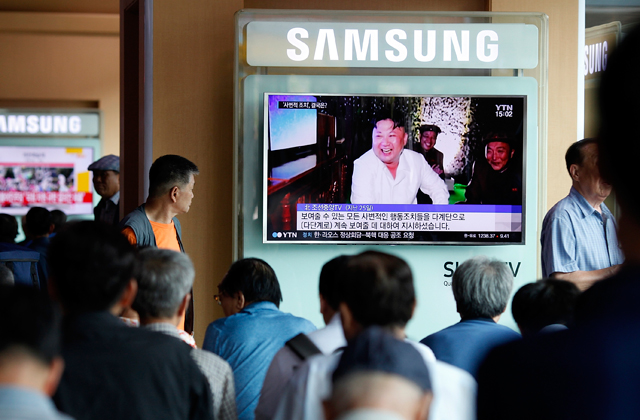 There may be no more pressing foreign policy problem facing the young presidency of Donald Trump than North Korea. Despite international isolation and crippling economic sanctions, Pyongyang has pushed ahead with a nuclear weapons program that may soon be sophisticated enough to strike the continental United States.

Any U.S.-driven solution to the North Korean crisis must involve China, Pyongyang's chief ally and the country whose economic assistance keeps the impoverished country afloat. In U.S. Policy Toward China: Recommendations for a New Administration, a task force report published Tuesday by Asia Society's Center on U.S.-China Relations and UC San Diego's School of Global Policy and Strategy, the co-authors argue that the Trump administration should pressure Beijing to use its leverage over North Korea to persuade the Kim Jong Un regime to freeze and denuclearize the country's nuclear weapons program.

In order to further explore the contemporary relationship between the U.S., China, and North Korea, Asia Blog caught up with task force report co-author James Steinberg, a professor of social science, international affairs, and law at Syracuse University who served as deputy secretary of state under the Obama administration. The interview has been edited lightly for length and clarity.

Is there a chance that the U.S. might be willing to make a bargain with China — say, by making concessions in the South China Sea — in order to get help on North Korea? Or do you think they’d want to keep these issues separate?

I don’t want to speak for anyone, but I think this is a bad idea for a lot of reasons. We have a range of interests in the region and we have a range of different partners, who have interests of their own. If one of these partners had to worry if, to put it bluntly, we’d sell them out, this would create a very unstable situation in which everybody began to doubt the reliability of the United States. Then we’d end up with the worst of all worlds. If we were willing to make a concession in the South China Sea to get support in North Korea, that might make the South Koreans or Japanese happy — but it certainly wouldn’t make the Vietnamese, the Filipinos, or the Malaysians happy.

I think we have to recognize that we have a range of interests here, and each of these really needs to be dealt with on their own terms.

What do you think is the larger concern for China: having a unified Korea under Seoul’s leadership, or a possible humanitarian crisis if the North Korean regime collapses?

I don’t think it’s possible to link them. One, we don't really know enough about what the Chinese leadership thinks about these things, and second, Beijing never has to say that one reason is more important than the other. We haven’t been able to discern what China's dominant concerns are, or whether there are some ways to address elements of these concerns to make Beijing more willing to act.

I guess the best thing to say is that there’s a range of factors, and there’s really no way to know how the Chinese government ranks them.

Is there any way the U.S. can solve the North Korean crisis without China’s involvement?

There’s been a lot of discussion about this over the years, but I don't believe a bilateral solution acceptable to both the U.S. and South Korea is possible without China. Theoretically, if the U.S. were prepared to completely acquiesce to North Korea’s nuclear program and normalize relations, then it’d change the game. But I don’t think it’s very likely that the U.S. is going to do that. So the elements of the U.S. bottom line cannot be achieved without China’s involvement.

Why would a formal resolution to the Korean War be helpful in solving the North Korea crisis?

I think formally ending the war would inevitably be part of a deeper resolution of the problem. But I think it more would reflect positive movement on the other issues rather than be something in its own right. The value of resolving the war is that it would entail a de jure recognition of the government in the north, and to some extent, it would also offer some assurance to Kim Jong Un that we accept the legitimacy of his control.

But it isn’t a thing by itself that will change the game. If we say tomorrow that we recognized the end of the war and declare it over, I don’t think it would have a profound effect on the crisis. The problem isn’t the de jure continuation of the Korean War, it’s the internal and external activities of the North Korean government that create instability.

We should be prepared to resolve the war and accept the fact that there’s a separate government in the north. There’s no policy of forcibly trying to reunify the two Koreas. But I would see the resolution as a component rather than a driver of the solution.

A prominent North Korean defector recently said that Kim Jong Un’s "days were numbered," and there was a high-profile purge a few days ago. What’s your sense now of the internal politics of North Korea? Is the country more volatile and unstable than it had been?

Even when I was in government and had access to the intel, I was very cautious about trying to make these judgments. We really don’t know. We have to do the best we can to understand the dynamics. But I think a healthy dose of humility about our understanding of the internal political dynamics is useful. We’re not well-served by trying to assume that it is very stable or unstable. We have to accept the fact that we don’t really know. We have to accept the possibility that there may be forces going on we don’t know about.

It may be more volatile than it appears, or less. We’re not well able to make those judgments — more often we’ve been wrong than right. So the bottom line is I don’t know. There are obviously some tensions there. But whether they’re more or less stable, I find it very hard to say.

The Obama administration's policy toward North Korea was referred to as “strategic patience....”

It’s such a terrible word and I don’t think it was the policy.

What would be the more accurate way to characterize it?

I think it was a principled willingness to negotiate if North Korea was prepared to take meaningful steps to deal with the incidents of the day.

Is it premature to say that this policy has or hasn’t worked?

To say it’s worked or not worked, you have to compare it to other alternatives. Has it achieved its objectives? No. Would it have been better to do something else? Not obviously.

That’s why I really resist the "strategic patience" label. It’s not as if people are assuming that it’s all going to work out if we just wait. "Patience" refers to not being so desperate to a deal that you keep making more and more generous offers. We have to recognize that some deals are worse than the current situation.

That’s the key to the policy — the willingness not to be so eager to get a deal that you make concessions which are actually against your interest.