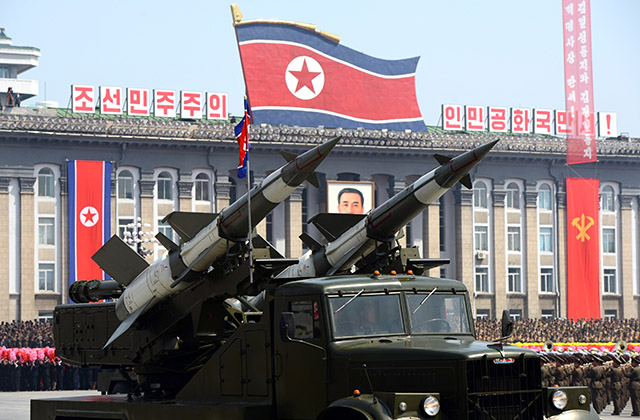 Missiles are displayed during a military parade to mark 100 years since the birth of the country's founder Kim Il-Sung in Pyongyang on April 15, 2012. (Pedro Ugarte/AFP/Getty Images)

In September, North Korea launched its fifth successful nuclear test — the country's largest to date — and claimed that the bomb was small enough to fit on a ballistic missile. This came just eight months after the previous detonation; earlier tests had been spaced roughly three years apart.

"Shortening of the interval means they are approaching the final stage of completing the miniaturization and standardization of warheads," said Sung-hwan Kim, former South Korean Minister of Foreign Affairs and Trade. "Furthermore, they express their will to use these weapons."

North Korea has been seeking nuclear missiles capable of hitting the United States for years, and many analysts fear it's nearing that goal. And in contrast with past motivations, the country may not just be out to make a statement or gain a bargaining chip. "I think we are in a different era," said Chris Hill, former U.S. ambassador to South Korea, who also headed the U.S. delegation in the Six Party Talks on North Korea’s nuclear program. "I think we're seeing a qualitative change in the crisis."

So what, if anything, can be done?

In this episode of the Asia Society Podcast, analysts including Kim, Hill, Park, Yun Sun, and Chung-in Moon trace how the so-called "Hermit Kingdom" has been able to develop such sophisticated weapons, and how the international community might counter them.