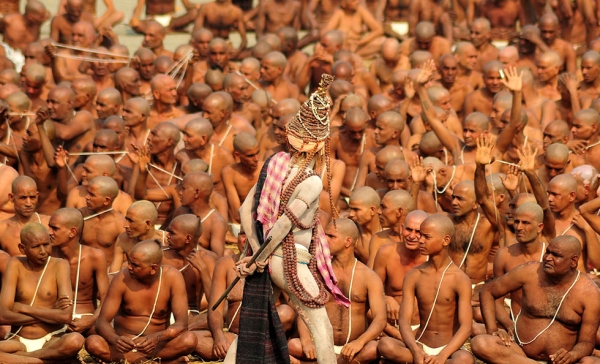 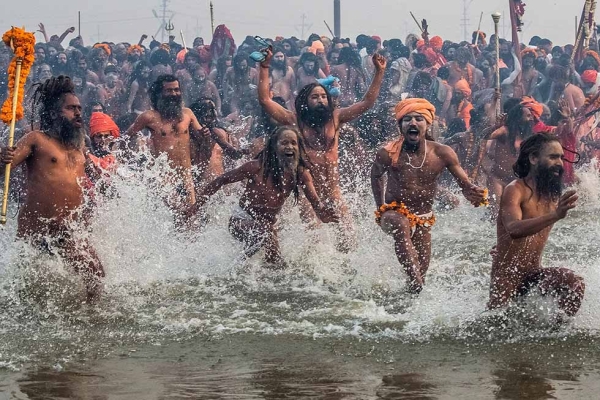 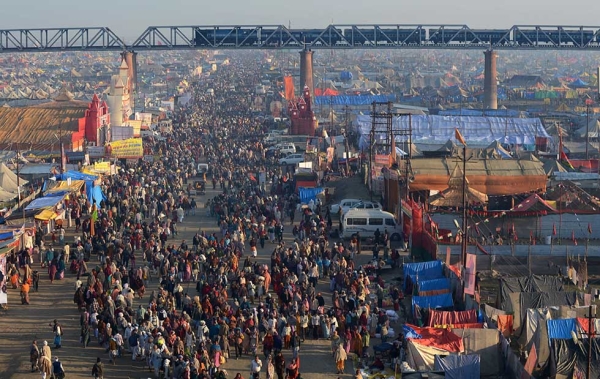 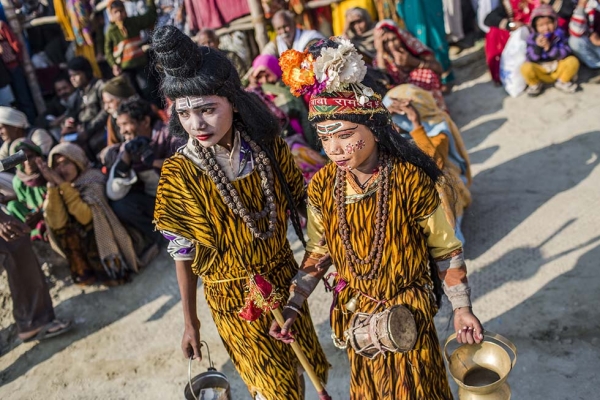 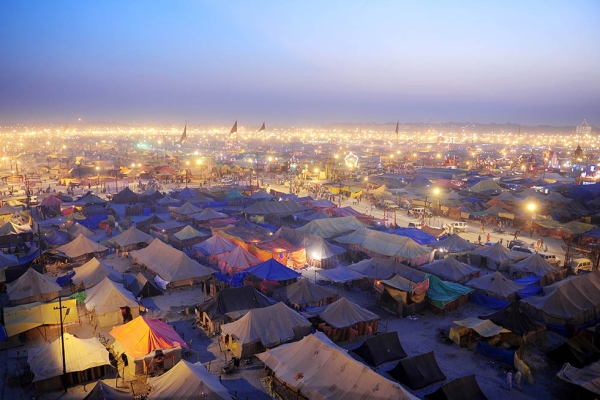 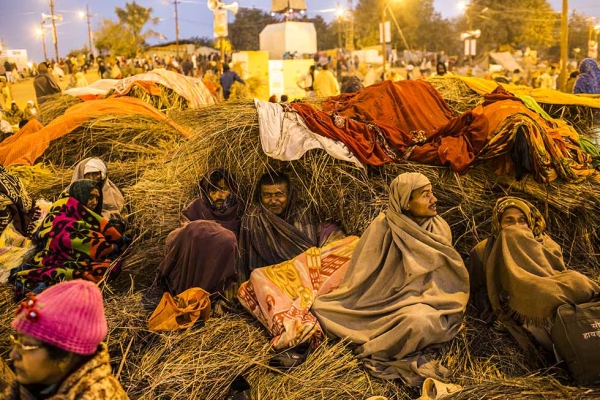 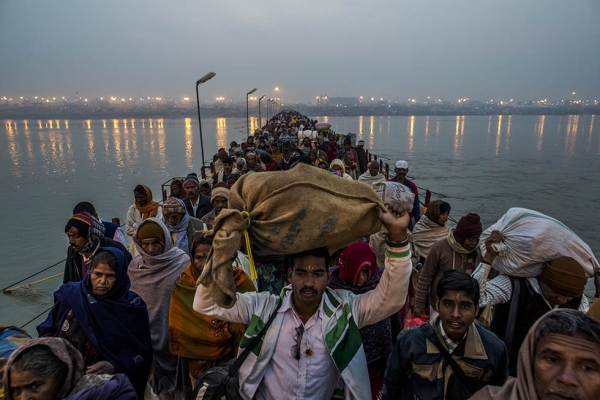 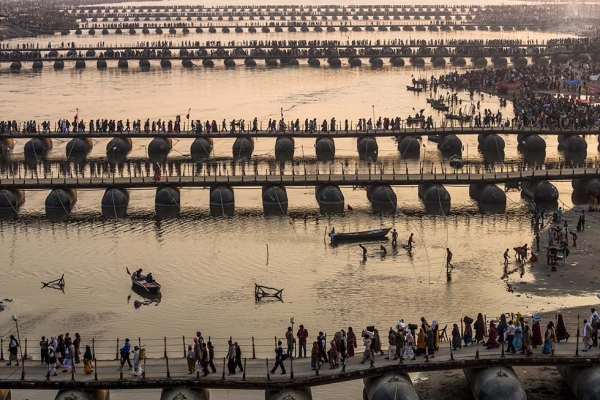 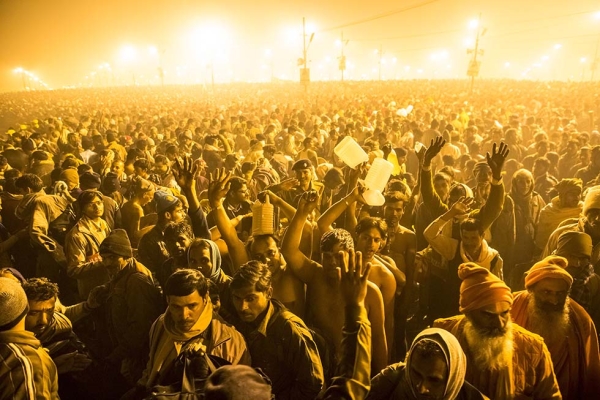 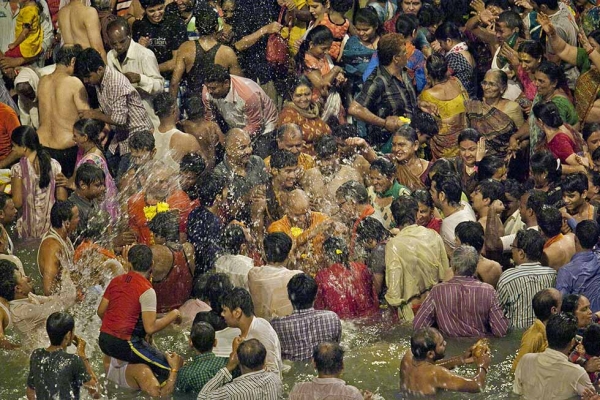 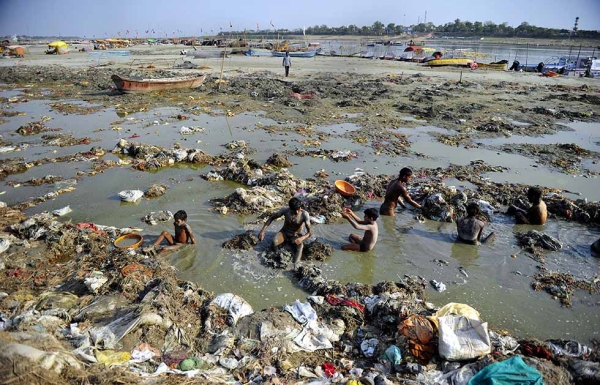 Every 12 years, tens of millions of Indian Hindus descend on the northern city of Allahabad to bathe in the spot where the Ganga and Yamuna rivers converge. This sacred ritual, known as Kumbh Mela, dates back to the first millennium CE and represents the largest public gathering in the world. At the most recent observance in 2013, an estimated 30 million pilgrims inhabited the makeshift city on its peak day, and as many as 100 million passed through during the 55-day fair.

This massive congregation of humanity and the equally massive logistical challenges that accompany it intrigued Harvard scholars from a number of disciplines. So in the lead-up to the 2013 event, the university’s South Asia Institute established an interdisciplinary research project involving more than 50 professors, students, administrative staff, and other researchers from fields including business, technology, urban design, public health, and religion. Their findings culminated this year in the book Kumbh Mela: Mapping the Ephemeral Megacity. On November 6, several of the researchers involved in the project spoke at Asia Society in New York about the lessons learned for different fields. Prior to the talk, Tarun Khanna, director of the Harvard South Asia Institute, and Rahul Mehrotra, professor of urban design and planning at Harvard’s Graduate School of Design, spoke with Asia Blog about their experience and what stood out from the research. Below their interview, see video of the Harvard scholars at the Asia Society event discussing their Kumbh Mela experience.

What is it about the Kumbh Mela that was so intriguing to scholars from such diverse backgrounds?

Rahul Mehrotra: One is that this is a sheer spectacle when you have a temporary city of seven million people for 55 days with another 100 million people visiting. The sheer scale and the aspect of its temporariness is just mind-boggling. So of course it’s interesting to engage with and understand. And the second is really that something as phenomenal as this — the ephemeral megacity, as it’s been described — has never been studied as an urban organism. It’s been studied by anthropologists, political scientists, and in books about pilgrimage. Photographers have created volumes on it because of the visual spectacle. But it hasn’t been systematically studied as a temporary city.

Tarun Khanna: An enormous amount of urban planning, civil engineering, governance and adjudication, and maintenance of public goods — physical ones like toilets as well as intangibles such as law and order — and plans to deal with unexpected events go into the creation of this city. Those are pretty much the main elements surrounding the creation of any city in the world. The Kumbh Mela is the largest gathering of humanity in the world. As social scientists, we don’t have the luxury to design experiments in the lab, so we are predisposed to take full advantage when these situations occur.

What surprised you the most during your time at the Kumbh Mela?

Tarun Khanna: What surprised me was the incessant sound. I live in Newton, Massachusetts, where there is no sound at any hour of the day. At the Mela there was sound 24 hours a day. It is an extreme version of Mumbai. On the positive side, everyone was happy and satisfied. There was no visible angst, which is incredible given that there are so many people. In a lot of the ways the thing that really puzzles people when this material shows up in the classroom is, how the heck is it possible for there to be no dissatisfaction at an event of this scale?

Rahul Mehrotra: I think the things that surprised me were how quickly this whole thing was deployed on the ground, because basically they had six weeks to get a city up and running with infrastructure, water supply, and electricity. That was an amazing surprise. But equally surprising was how quickly they dismantled it and how it disappeared in a matter of a couple of weeks, because the river starts to flood. They salvage all the materials, which get recycled to the hinterlands of the state to smaller towns and villages.

Did it appear especially difficult to organize given that the event is only held once every 12 years and there are presumably a lot of changes with organizers and personnel?

Rahul Mehrotra: Absolutely. What’s interesting is that it’s all based on oral tradition, so between the administrators there’s a sort of continuity — there are very few guidelines and very few guidebooks that would allow someone in charge 12 years later to know what to do. But there is a kind of oral memory; there’s an institutional memory that stays within the bureaucracy that enables this to happen. So people involved in the previous cycle step in as advisors. 2013 was the first time it’s been captured [academically] as a city. I say this jokingly or half-jokingly, but I’m afraid now that Harvard has produced a handbook on it, the next one might be a complete failure because they might follow the handbook instead of going by the oral memory of the institution. So this is always something that nags me (laughs).

Before the project began, some media outlets suggested that your research could yield findings applicable to everything from Burning Man to refugee camps. Was there any finding that really stuck out in this regard?

Rahul Mehrotra: I think one area where we learned a lot that can be applied was in governance. [Organizers] have almost two parallel governance systems — one during planning and one during implementation. The hierarches sort of flip, and this is very important because when you have to deploy quickly — like in refugee camps —  what happens is that the centralization of bureaucracy, whether international NGOs or other groups, often slows down the process a great deal because people who have the mind to plan at a macro level often don’t have the temperament or the mind to implement it on the ground. I think this results in a lot of failure in rapid deployment for disasters and refugee camps.

Tarun Khanna: One of the nice spin-offs has been the attention on refugee camps, which is so relevant today. People from the areas of health, design, business, finance, and law have come together to work on these problems, with some insights that are based on work done at the Mela. It’s such an important issue — it’s in the news now with the Syrian migrant crisis, it was in the news when Katrina hit. In the course I teach at Harvard, it’s a capstone session to have people think about what to do in this sort of crisis, and how various disciplines can be brought into the discussion to help.

Watch complete video of the presentations and discussion at Asia Society in New York. (1 hr., 24 min)