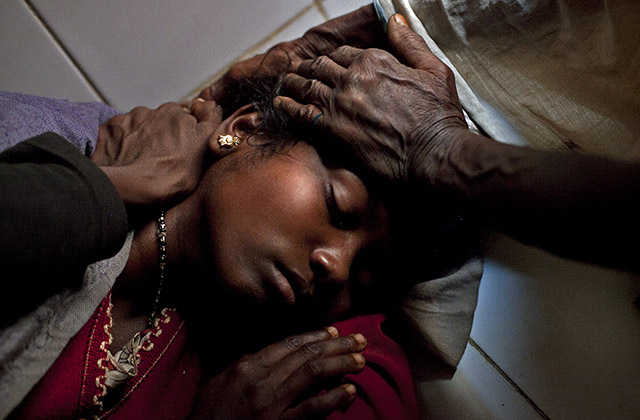 A woman complaining of muscle pains consistent with metal contamination waits in a hospital in the Sonbhadra district of Uttar Pradesh, India. (Redux/Bloomberg)

On June 3, Asia Society New York will host the awarding of the 2015 Osborn Elliott Prize for Excellence in Journalism on Asia to a team of three Bloomberg News reporters, with special guests George Stephanopoulos and Marcus Brauchi. Learn more

In 2014, energy reporter Rakteem Katakey was part of a Bloomberg News team that reported on dire health effects in India sprouting from uranium and coal mining, and how illegal sand mining led to a flood that drowned two dozen students.

On June 3, Katakey and the Bloomberg News team will receive Asia Society's 2015 Osborn Elliott Prize for Excellence in Journalism on Asia for their stories, which the jury chair said, “helped bring attention to communities where the poorest of the poor and their children are being deformed and killed by diseases that are linked to local industrial pollution.” In an interview with Asia Blog, Katakey discusses his stories, his work as an energy reporter, and why India is struggling to enforce environmental protection.

What drew you to become an energy reporter?

It's a great sector, and it's all around us. Energy affects all our lives and much beyond. We all know the role energy plays in global politics, policy, and business. Unlikely friendships have forged and wars have been fought. Nations' foreign policies have been built around energy. So, it’s an exciting sector to write about. This is what had me interested, the global role energy plays and yet it affects every individual human being in so many ways. Over the past few years, it has widened even further and the debate now includes climate and the very basis of existence. It just keeps getting bigger and more interesting every day. I thought this beat would help me understand all of that better, and I've really enjoyed writing about energy and climate and water the past eight years.

Your stories highlight some of the systematic problems with enforcing environmental protection in India. Why is the country struggling so much with this?

That's the thing about energy. It's such a basic need and it's such an important part of a society and country's economic and social growth that we count the consequences only when it's very late. In our rush for development we sometimes leave people behind, the same people who give up their land and their means of livelihood so a big power station or a refinery or a mine can be built. These factories then pump their waste and sludge and pollutants right back to that land and the air, making those same people ill.

India, like other developing countries, and even developed ones, wants to produce more energy and build more factories because that creates jobs, which in turn gives them money and puts food on their plates and allows them to send their children to school. The people who live around these factories and mines understand that very well. They often benefit from this development as well, when for example, health centers and hospitals are built where before people had to walk miles for basic healthcare.

Equally important is the environment and, as an extension of that, people's health. That's been the problem — as we rush toward development, we could end up paying a very, very heavy price for it.

What’s been the story you’ve done that’s left the biggest impact on you?

The first story we published in this series was the one about uranium mining. Issues around pollution near uranium mines have been reported in Namibia and Niger, for example, and even in the U.S. southwest. I grew up in a hill town in India where uranium was discovered in the early 1990s. As a schoolboy, we heard stories about people picking up uranium ore rocks with their bare hands and we would all be very amazed by how they had no idea about radioactivity. Over the years, the people in the villages around the mines got to know about radioactivity and protests started cropping up. Even after all these years, commercial mining hasn't started there. These stories stayed with me for many years. Early last year, I seriously started researching it and travelled to India's biggest and oldest uranium mine. The story I saw and heard there had to be told.

As we spent days speaking with people in these areas and visiting factories and villages around there, we realized many of these people have been forgotten. Many are ill and there are no substantive scientific studies attempting to find out why they're ill. The irony is that some of these people, who gave up their land so India could build power stations, don’t have electricity themselves. I think these are questions the government must seriously consider because these people don’t want to be treated as collateral damage in the progress toward development.

Can you compare what it’s like covering energy in India and in London, where you’re now based?

London is a great city. It feels like the center of the world, from where you get a global view of the energy universe, and everything else. The buzzing financial center that it is, it feels like you could be writing about a different part of the world each day of the week. India is a world in itself. There are so many exciting things happening there every day. It's a great time to be a journalist in India at this moment as the country goes through major structural, policy, and social changes. For me, there's really very little difference in covering energy in India and in London, energy being a global subject and one region's issues could easily affect another country. If there is a difference, it's that London gives me a top-down, 35,000-foot view, while India immersed me in the excitement of the daily coverage.