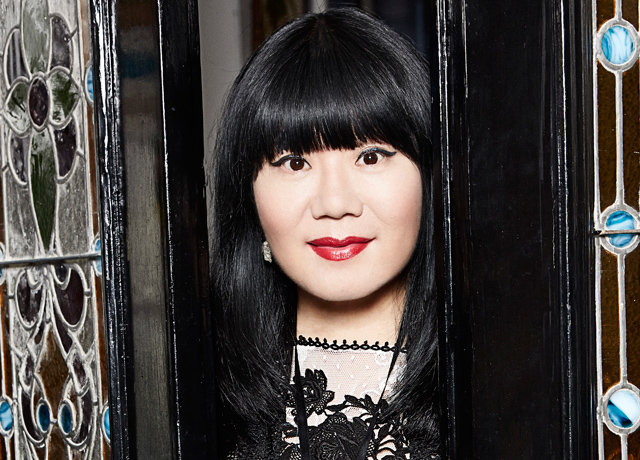 Anna Sui, one of the most iconic American fashion designers, is renowned for a signature bohemian, rock and roll aesthetic that has graced the runways for the past three decades. Born in the suburbs of Detroit to Chinese parents, Sui got her start in fashion after attending Parsons School of Design in New York and was nudged into the industry by fashion-savvy friends including photographer Steven Meisel and supermodels Linda Evangelista and Naomi Campbell. Since her first boutique opened on SoHo’s Greene Street in 1992, Anna Sui has expanded globally with her clothing, beauty, and accessory lines that are now sold in over 375 shops in 35 countries. She has received several notable honors throughout her career, including the Geoffrey Beene Lifetime Achievement Award from the Council of Fashion Designers of America.

What was your first meaningful encounter with fashion? When did you know you wanted to do this for a living?

When I was four years old, I’m told, I was already talking about becoming a fashion designer. I'm not exactly sure where I got that notion. It was probably something I had seen on TV. I always had it in my mind that a designer surrounded herself with gorgeous fabrics, and a big sketchbook, and would drape cloth around a mannequin, and then go out to lunch. It all seemed like a very glamorous life.

How has your design philosophy stayed consistent, or evolved, through changing trends?

I think I’ve always been very consistent. When I started designing, my intention was to dress rock stars and people who went to rock concerts … and that’s what I still do. Music has always been a major influence on me. The Rolling Stones were always my favorite style icons. When I am designing, I still think to myself, “is this cool enough for Keith Richards and Anita Pallenberg?”

What were the most challenging aspects of bringing your fashion label to the global marketplace?

I give my parents a lot of credit for my success. My father was a structural engineer and my mother studied painting. They met when they were both students in Paris. I get the business side from my father and the artistic side from my mother. After they married, they traveled throughout Europe for three years and finally settled in the U.S. My father continued studies at the University of Michigan. I was born in Detroit. Growing up and learning about Chinese culture from my parents, and hearing them talk about all the different places they had lived, prepared me for thinking globally. This perspective took away any fears of being able to function in a foreign country. Their experiences were a gift to me.

Do you have any favorite young Asian American designers? If so, who are they and what do you like about them?

I’m currently working on an exciting project with [Carol Lim and Humberto Leon of] Opening Ceremony to re-create favorite items from my archive (particularly, things from my Punk and Grunge collections from the 1990s!) as part of their Year of China celebration. They are also featuring a group of wonderful young Chinese designers. My favorite is Angel Chen! You can see her work on their website.

What are you planning to tackle next?

I’m working on my second book! This one will be more like a scrapbook of my influences and interests. It will come out next year, and be a companion to a major retrospective of my work at the Fashion and Textile Museum in London (and then traveling to other cities after that!).

In 2013, Anna Sui appeared at Asia Society's Celebration of Asia Week benefit gala. Click below to watch the full video.