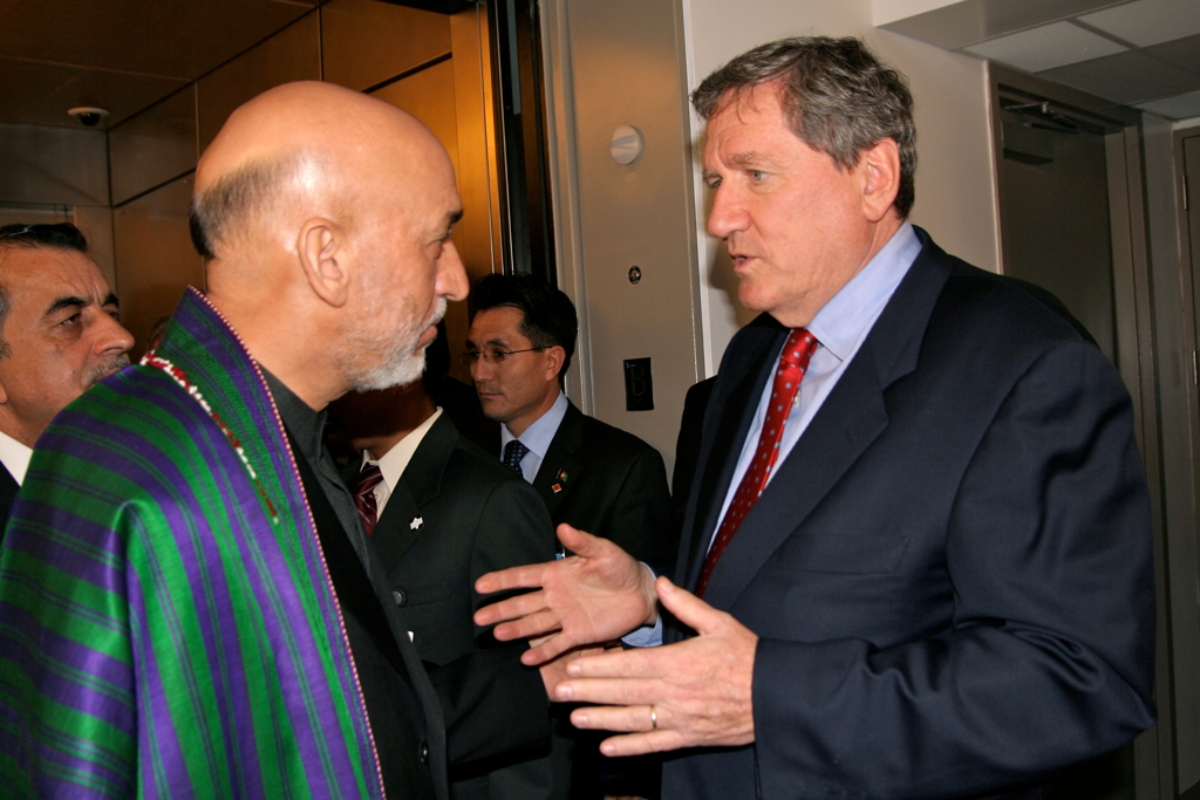 On May 7, George Packer will discuss his new biography of Richard Holbrooke with Suzanne Nossel and Tom Nagorski at Asia Society New York. The program will be available via live webcast at 6:30 p.m. New York time.Learn more

The death in 2010 of the diplomat Richard Holbrooke wasn’t just a loss for the American government. It signaled the end of the so-called American century, or half-century, which Holbrooke’s remarkable career embodied. This career — which began in 1962 in Vietnam where Holbrooke served as a young foreign service officer and ended with his death while serving as Afghanistan/Pakistan czar for President Barack Obama— is the subject of George Packer’s remarkable new biography Our Man.

Packer’s book is much more than just a recitation of Holbrooke’s CV. It’s also a piercing account of a true force of nature — an indefatigable diplomat determined to solve the world’s problems through sheer imposition of will. Along the way, his exploits caused substantial collateral damage: two failed marriages, a distant relationship with his children, many enemies. He wasn’t everyone’s style. Not least Obama, who found the veteran diplomat’s constant references to the Vietnam War tiresome and kept Holbrooke at arm’s length.

Holbrooke is best known for negotiating the Dayton Peace Accords in 1995 that ended the brutal conflict between Serbia, Bosnia, and Croatia. But many of his most notable diplomatic achievements occurred in Asia. As Assistant Secretary of State in the Carter administration, Holbrooke pushed the United States to allow hundreds of thousands of refugees from Southeast Asia — the so-called “boat people” — to find safe passage in the U.S. and elsewhere. Two decades later, as the United States Ambassador to the United Nations under President Bill Clinton, Holbrooke helped protect thousands of East Timorese civilians from the Indonesian military and paved the way for East Timor’s independence.

Holbrooke wanted more. He wasn’t a grand strategist, but his frenetic public presence made him the embodiment of a certain idea in action. He believed that power brought responsibilities, and if we failed to face them the world’s suffering would worsen, and eventually other people’s problems would be ours, and if we didn’t act no one else would. ... His views like everyone’s emerged from his nervous system, his amygdala, the core of his character, where America stood for something more than just its own power. He was that rare American in the treetops who actually gave a shit about the dark places of the earth.

Holbrooke wasn’t just Our Man: He was our man, too. From 2002 to 2009, he served as chairman of the Asia Society, where he oversaw the establishment of the Center on U.S.-China Relations and new centers in Mumbai and Seoul.

Orville Schell, whom Holbrooke tapped to lead the U.S.-China center, reminisced about the diplomat’s unusual recruitment style in an essay published after Holbrooke’s death:

When as chairman of the board of the Asia Society he and President Vishakha Desai were courting me to come to join them in running their new center on U.S.-China relations, I was able to watch Holbrooke in high gear. Once he knew what he wanted, all he wanted to do was, Get it done! In the summer of 2007, during the process of my hire, we were sitting in his office at Perseus Books one day talking about his aspirations for the new center. I was asking far too many questions for this get-the-job-done guy. As I think back on it, perhaps all my questions suggested to him that I was wavering in my interest. Whatever the case, without even asking me if I was available, he picked up the phone, ordered a private helicopter, called up Arthur Ross (the philanthropist who had endowed the new Center), told him we were coming for lunch; and then ordered me to get my effects together. An hour later, we were down at the 33rd St. East River chopper pad leaving for Easthampton, Long Island. A few hours later, we were sitting in Arthur Ross's living room on Long Island and I had taken the job.

The experience left me marveling at Holbrooke's presumptuousness, decisiveness and brazen sense of self-entitlement. It was as if he — then just a rainmaker at a publishing company — were still in command of a whole military unit with a fleet of aircraft at his disposal. I had also gained a hint of how this singular diplomat had managed to corral the likes of Slobodan Milošević into signing the Dayton Accords!

Rachel Cooper, Asia Society’s director of performing arts and cultural programs, described an encounter with Holbrooke in Bali, Indonesia, in 2008.

I had met Holbrooke in various board and regional meetings at the Asia Society over the years but it was when we were in Bali at the Williamsburg Conference for an off-the-record policy meeting that we actually had time to talk about ideas. Although I am in charge of performing arts and cultural programs at Asia Society, I was at the Williamsburg conference in Bali because it is my regional area of expertise. The opening dinner of the conference was scheduled to feature a speech by the finance minister of Indonesia. Literally, at the last moment, she was not able to make it from Jakarta. As the resident Indonesianist, I was asked if I could come up with something else in the next half hour. I actually had a Balinese journalist there who had been planning to speak about culture but switched and spoke about Hindu religious extremism as it manifested in Bali. (Most people in attendance only knew of the Islamic extremism in Indonesia). I was asked to introduce him and give a short background talk.

Holbrooke had not known this aspect of my work at Asia Society nor the current situation in Bali, so it provided a new context. He later came to speak to me and learned of our Asia Society project Making a Difference Through the Arts that focused on cultural projects that built bridges, particularly in the Muslim world. Based on this, he later shared the report we wrote with officials in Pakistan, Afghanistan and yes, at the State Department and White House. Later, I received a call from the president’s Committee on the Humanities regarding the recommendations in the report. They even awarded two of the young people featured in the report and brought them to the ceremony at the White House. I think of the impact Holbrooke had on me and I am grateful for the attention he gave.

There’s plenty more about Holbrooke on our site. In February 2011, then-Secretary of State Hillary Clinton delivered a speech on U.S. strategy in Afghanistan and Pakistan at Asia Society for the Richard Holbrooke inaugural address. Later that year, journalists Roger Cohen and David Rohde and historian Gordon M. Goldstein joined writer Kati Marton, Holbrooke’s widow, on our New York stage for a discussion of Holbrooke’s legacy. And in 2006 Holbrooke sat for a wide-ranging interview with Asia Society’s Nermeen Shaikh about the role of the United Nations in the global war on terrorism.

Packer will join PEN America’s Suzanne Nossel and Asia Society Executive Vice President Tom Nagorski at Asia Society New York for a discussion of Our Man on Tuesday, May 7. You can read excerpts of Packer’s book at The Atlantic and Foreign Affairs and purchase a copy at AsiaStore.