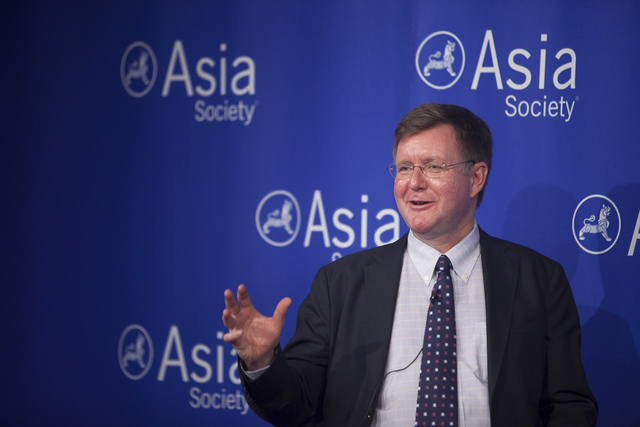 "It has an outdated system of government that will not serve the country well in the medium term or in the long term: because it's not efficient enough to respond to rapid change, because it doesn't recruit the best daughters and sons into becoming leaders, and because it's much too narrow in terms of the tools that it provides for understanding how the world works."

In the near future, Westad said, China's approach to foreign affairs will be characterized by a focus on Asia.

"There's no one that I know of, currently in China, at the top level of Chinese politics, who sees China as a successful global power any time soon," Westad said. "Today and for the next decade, possibly the next two decades, China will first and foremost be a regional power."

"It's a country whose power is growing enormously, first and foremost in economic terms, but also gradually in political and military terms. But its eyes, its concentration, [are oriented] towards its own region."

Westad said he believes China has taken an aggressive stance in regional affairs partly because of "a misreading of how international power shifts under difficult, very rapidly changing economic circumstances."

"It is misreading that wealth and power are shifting from the West to the East — which I think is undoubtedly true — and believing that China can benefit from that in a direct foreign policy and strategic sense today."

Westad described this outlook as "very self-destructive" and said China should instead cultivate a "close, cooperative relationship with Southeast Asia," which Deng Xiaoping had advocated.

For its part, Westad said, the United States must "go on attempting to integrate China, as much as possible, into the global society" and "to make it possible for the Chinese leadership to see their own self-interest served by that system, even in an amended form."

"Attempting to contain, to isolate, to punish China will not work," Westad said, because it would play into "the kind of story that the government would like people to believe" about how the world "is punishing us because we are Chinese."

Westad delivered his remarks during an event honoring him with the 2013 Asia Society Bernard Schwartz Book Award for Restless Empire: China and the World Since 1750. The book chronicles the past 250 years in China's history from a Chinese perspective.

"It was a book I've always wanted to write, about how China sees itself and the outside world," Westad said.

The central theme of his book, Westad said, is "China's enormous ability, over the 250 years that I cover in this book, to embrace change, to deal with change, to integrate change into the daily lives of people."

"There is very little in this book about inward-looking China or isolated China, or a China that is self-satisfied because it is successful in its region," Westad said. "The China I see back then and that I see today is a China that is open to change, in many different ways, often in contradictory directions and with very uncertain, undefined outcomes."

Westad described China's modernization as a "metamorphosis" in which the country synthesized domestic and international ideas and values.

"China today was created both by domestic and foreign influences, to a much higher degree than many other countries we know," Westad said.

He identified several eras in which China looked to certain countries for new influences. In the current era, which began in the 1980s, China turned to the United States for model institutions and systems.

"[For] my Chinese friends and co-researchers, at the center of their concept of modernity has to be the United States of America," Westad said. "There's absolutely no doubt about that: there is a deep fascination."

Westad said economic ideas from the United States have left a particular imprint on China.