Interview: Author Pankaj Mishra on the Modernization of Asia 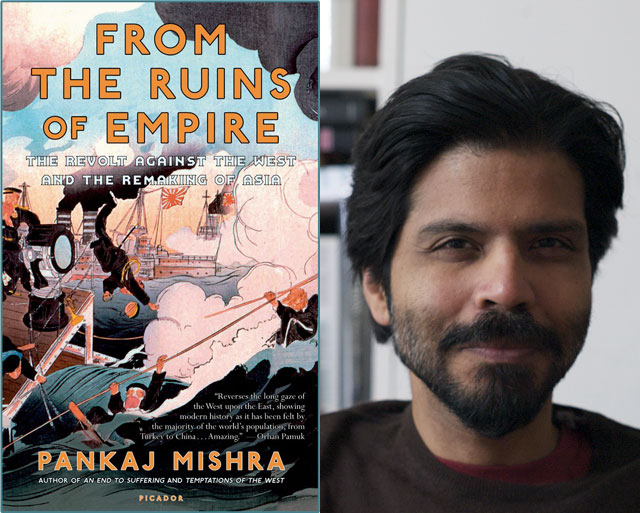 Pankaj Mishra (R), author of "From the Ruins of Empire: The Revolt Against the West and the Remaking of Asia" (U.S. paperback edition, 2013). (Author photo: PankajMishra.com)

Restless Empire: China and the World Since 1750 by Odd Arne Westad was named winner of the 2013 Asia Society Bernard Schwartz Book Award for its outstanding contribution to advancing the understanding of contemporary Asia. On December 18, 2013, Dr. Westad will visit Asia Society's New York center for a special luncheon event featuring remarks by the author and a discussion moderated by Orville Schell, Arthur Ross Director of Asia Society's Center on U.S.-China Relations.

Critic and journalist Pankaj Mishra won an honorable mention in the 2013 Bernard Schwartz Book Award for From the Ruins of Empire: The Revolt Against the West and the Remaking of Asia. Ahead of the Dec. 18 ceremony to recognize the winning book, Odd Arne Westad's Restless Empire: China and the World Since 1750, Mishra responded to Asia Blog's questions by email.

In your Q&A with Asia Blog in September 2012, you commented, "We live in an interdependent world and have to accordingly devise a profoundly ethical political and economic outlook rather than embrace and adopt the 'organized selfishness,' as Tagore called it, of nation-states." Since that Q&A, have there been any enduring developments in Asia that express such an outlook?

I wish I could point to any, but all we have had since then are attempts at such narrowly business-minded deals like Trans-Pacific Partnerships. The Japanese prime minister has been very busy, working up an Anyone-but-China coalition, the new Chinese leaders are taking a more assertive stance towards their neighbors, the Australians have elected a prime minister with a hardline policy on immigration, Indian corporates and their mouthpieces in the media have rallied around a man who openly and proudly calls himself a Hindu nationalist. On the whole, we have witnessed a rise in xenophobic nationalism, and not just among old adversaries like China and Japan. So the disjuncture between an interdependent reality and organized selfishness is starker now.

From the Ruins of Empire argues that Jamal al-Din al-Afghani, Liang Qichao, and Rabindranath Tagore had a deep, lasting influence on the way that Asia is responding to Western imperialism. Tell us about a present-day Liang or Tagore: a scholar in Asia who has posited an original and Asia-specific approach to political and economic challenges in his country or across the continent.

My book actually argues that al-Afghani, Liang and Tagore did not decisively influence the nation-states that came into being as a response to Western imperialism, despite the subtlety and cogency of their analysis. History took other turns, and they could have no successors because of the particular and very harsh logic and moral expediencies of nation-building, which brought to the fore another kind of "thought leader." The intellectual with their degree of prominence and authority now tends to be a professional think-tanker or academic, not an itinerant philosopher, freelance journalist, or poet. The largely bogus cult of expertise has marginalized and delegitimized the older tradition of moral argument and criticism — Tagore today would be asked for his "credentials" and dismissed as a dilettante if not a dreamy poet.

This is not to say that there are any number of thinkers, writers, and activists working across Asia, facing the challenges of environmental despoliation, and economic and political dysfunction — I can think right away of Pakistan's Abdul Sattar Edhi, Jean Drèze and Mahasweta Devi in India — but you won't find them holding forth at Davos, Aspen or the many wonkfests and intellectual love-ins of globalized elites.

In your new book, A Great Clamour, you write, "The idea of Asia has acquired a different coherence today. What connects geographically disparate experiences […] is the late arrival of capitalism." Do you feel a kinship with thinkers in Asian countries, in your efforts to define a response to the incursion of Western values and systems? Or a kinship with the intellectual cohort you wrote about in From the Ruins of Empire?

I don't think the problems of Asia today can be posed, let alone solved, through an East-versus-West binary. The fact is that al-Afghani, Liang and Tagore exhorted their compatriots to learn from 'Western values and systems." And this remains urgent and relevant today. As Tagore put it very clearly, speaking about education, "that all elements in our own culture have to be strengthened not to resist Western culture, but truly to accept it and assimilate it: to use it for our food and not as your burden; to get mastery over this culture, and not to live at its outskirts as the hewer of texts and the drawers of book-learning." With this, many people in Asia, then and now, totally concur — and you only have to see the damage inflicted on some very creative individuals in India by rote-learning and a poor grasp of English.

And this remains the fundamental task — how to adopt new knowledge and techniques from elsewhere without creating new hierarchies within our societies, without disempowering great majorities. The arrival of capitalism in its late stage in Asia complicates this task because it brings its innate problems of uneven growth and inequality — those that the U.S. and Europe are now facing — to places like India, which already suffer greatly from uneven growth and older forms of social inequality.

How much influence do you think Asian ideas about community and citizenship have in the West today? What are some political and economic models from Asia that you see shaping intellectual life and governance in the West?

I think it is too easy to sound like one of the many intellectual defenders of Asian authoritarianisms while speaking of "Asian" ideas of community and citizenship, and I would like to resist this invitation to define them as exclusively Asian. Alternative ideas of community and citizenship have always been around, in the West as well as in Asia. Perhaps, they have been articulated a lot more clearly in the non-West in recent decades, and I can do no better than to quote Soedjatmoko, one of Indonesia's most original minds, who spoke of "a concept of modernization that does not emphasize competition, but cooperation; a concept of development that does not aim at affluence, but at sufficiency; and a conception of individual rights and ownership that is limited by the public good."

Many Western leaders and thinkers consider capitalism and democracy to be essential ingredients in the recipe for national success. Do you have any concerns about how an Asian outlook on political and economic affairs, not necessarily grounded in the same institutions and ideologies, might affect relations between Asian and Western countries?

No, your question may have been more relevant during the long stasis of the cold war, when democracy and capitalism came to be upheld in Modernization Theory as essential ingredients of national success — a formula then adopted and revised by post-Reagan and post-Thatcher neo-liberals wanting to open up markets everywhere, by force if necessary. The fact is that imperialism and colonialism — unchallenged access to markets and resources internationally, which we euphemize with the word "capitalism" — were the major ingredients in the national success of the United States and Western European countries. Democracy came to these countries in piecemeal fashion, and then through agitation by the working classes, women and minorities. And it is only after two world wars and some horrific violence and crises that Western Europe and America achieved a sort of truce between democracy and capitalism, which has now broken.

Asia always had a different experience as a latecomer to the modern world. Imperialist Japan first showed that it did not need democracy and free trade to become a strong nation, and now China has shown more disconcertingly how national self-strengthening on the Western model is achieved by a country that comes late to the modern world, the great human costs you have to pay domestically when you don't have colonies or territories to exploit.

In any case, I think our views of institutions and ideologies are in rapid flux right now. No one looking honestly at the political economy of the United States today can really believe in idealized notions of democracy and the free market, which were always a kind of ideological smokescreen. The challenge before us is to salvage some workable and honest notions of democracy and capitalism from this wreck of outdated assumptions and old illusions.