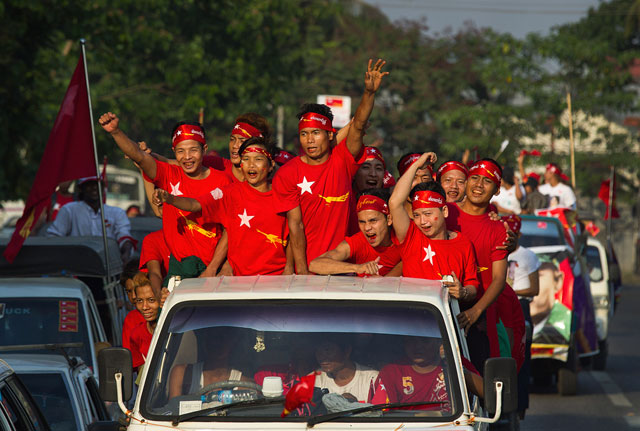 National League for Democracy supporters cheer as they parade ahead of the parliamentary elections in Yangon, Myanmar on March 30, 2012. (Paula Bronstein/Getty Images)

Chinese netizens' reactions to tentative democratic reforms in neighboring Myanmar, including to the recent repeal of censorship rules for private publishers by the Southeast Asian nation's reformist government, reflect just how closely it's possible for average Chinese to follow — and criticize — international relations even when their own access to information about the outside world is limited by the state-controlled press.

China’s information bottleneck has long driven the intellectually curious to seek out other viewpoints. When Myanmar’s opposition leader and Nobel Peace Prize laureate Aung San Suu Kyi began her visit to the United States on September 17, Chinese netizens were watching closely. They remained glued to the news a week later, when Myanmar President Thein Sein, a man whose name Washington only recently erased from a list of people barred from doing business with American companies, also showed up in the U.S. capital for a state visit.

The dual U.S. visits by the leaders of both ends of Myanmar's historical political spectrum were landmarks in the thawing of U.S.-Myanmar relations and suggested progress in the poor nation's steady reconciliation with its own people. As Suu Kyi embarked on her three-week American tour, Thein Sein's government, an outgrowth of the long-ruling military junta that kept Suu Kyi under house arrest for 15 years, announced that it would release 514 political prisoners.

Unremarkably, Myanmar's efforts at rapid reform have captured the attention of the world. On October 18, the U.S. State Department's human rights point man Michael Posner said he is optimistic that engaging with Myanmar's reformist government can yield results. After returning to Washington from two days of unprecedented bilateral talks in Naypyitaw, Posner told the Associated Press that he found the reformist government officials there to be open, practical, and honest.

Across the border in China, long considered the Myanmar's leading ally, an August 21 editorial in the Global Times, a tabloid published by the People's Daily, the mouthpiece of the Chinese Communist Party, put a less positive view on display to guide Chinese public discourse on the topic. The newspaper cautioned Myanmar's government against its August 20 decision to stop censoring the country's private press. Though Myanmar's reforms were welcomed unconditionally by other Asian neighbors, the Global Times dismissed them as offering little to China:

Myanmar has just started its reform and faces considerable uncertainty. Its reform measures have not yet proved to be effective. It seems to have come a long way in a short time but that is only because of its recent break with prolonged military rule. The rationale behind its reform is utilitarian — to convince the West to lift sanctions. Myanmar's reform is still at an experimental and formative stage and its most prominent characteristic is actually boldness ... But any utilitarian attempt should be pragmatic and realistic. The success of a reform does not depend on an idea, a slogan or a bold move but on its result and the practical benefits it brings to the people.

What came as a shock to many Chinese readers was that the editorial spoke with a level of condescension unusual even for the Global Times:

China's reform has undergone numerous tribulations and trials while Myanmar's reform is still a flower bud that has not experienced any hardship. While we wish Myanmar success, we would be too naive and weak-minded if we wavered from our own path simply because China, a giant tree with deep roots and thick leaves, looks different from a flower bud.

China has made and will make significant progress in promoting freedom of the press. There is no turning back. But we need to answer the call of the times and go forward based on the reality of conditions in China instead of idolizing backward countries like Myanmar and Vietnam in utter stupefaction.

"So neither can we idolize developed countries or regions such as the U.S. and Taiwan nor backward ones like Myanmar and Vietnam. While so many countries — both advanced and backward — are striding across the bridge pursuing freedom, justice, and openness, we're 'crossing the river by feeling the stones,'" wrote Weibo user Xiang Guangdao, citing a famous Chinese saying often used to describe the wisdom of Deng Xiaoping's policy of state-controlled economic reforms at a steady, controlled pace. "Should we then make an idol of North Koreans, who are living a happy life under the Juche Idea?" came one comment with no small hint of irony at the reference to the core "people-as-the-masters-of-their-own-destiny" thesis serving the one-family dictatorship of the Democratic People's Republic of Korea. "When you find all the other cars are coming toward you on the freeway, it's the Party that encourages you to keep driving ahead — 'Don't worry. They're all going in the wrong direction,'" wrote the Weibo user calling himself "Expired Sweet Bean Paste."

Some attacked the Global Times editorial with a historical metaphor. One Weibo user called Dengba invoked the One Hundred Days Reform of the late Qing Dynasty (1644-1911), when China's emperor rolled out a series of policies — modeled on Japan's earlier Meiji Restoration — to modernize Chinese society, only to see the powerful conservative faction in his court shut them down a few months later.

"The Great Qing has made and will make significant progress in its reform," Dengba wrote, likening the voice of the Global Times editorial to those of the hardline Qing aristocrats. "We mustn't make an idol of Japan, a backward country that has completed the Meiji Restoration."

Yet some Chinese netizens seemed to agree with the Global Times, at least in part, saying that it remained to be seen whether Myanmar's reform would succeed even as they allowed that China's own reforms left plenty of room for improvement. One Weibo user calling herself "My Heart's Been Busy Hou" wrote: "We oppose fake, sensational, and misleading news, but that doesn't mean we welcome censorship. I'll take a cautious stance on Myanmar's democratization and I believe we should wait and see how it will play out. The biggest problem with Asian democracies is that they tend to say one thing and do another, because they lack a solid foundation to support rapid institutional changes. For China, however, it would be perfectly OK to ease its media censorship a little bit."

Others simply stated the obvious, wondering aloud why a newspaper ever would speak out against freedom of the press. "I can understand there are certain things you can't say as a newspaper in China," wrote journalist Xin Haiguang. "But it makes no sense for you to ingratiate yourself with the powerful. Seriously, is it so difficult to just be an onlooker?"

One day after the Global Times slammed Myanmar’s press reforms, China's netizenry were astonished to learn of the suicide of Xu Huaiqian, editor-in-chief of the Earth, a People's Daily supplement. According to the People's Daily Online, Xu, who killed himself at home, had suffered from depression and had applied for medical leave. But writer Zhang Hongjie posted a message on Weibo suggesting Xu's condition had been more complicated than how it had been described by his employer. Zhang said that while Xu had enjoyed the benefits of working for China's state media, Xu also had revealed in an interview that he was experiencing great mental distress. "My pain is that I don't dare to say what I think or write down what I say. Even if I write it down, there's nowhere for me to publish it," Zhang quoted Xu as saying in their interview. Later, Zhang's Weibo post was deleted.

That Zhang's post went up online at all and, potentially, was read by hundreds of thousands, if not millions, of netizens, reflects just how much greater China's outlets to free expression have become in the Weibo age.

But China, its half a billion netizens, and its average citizens not yet online — another half a billion people more — still remain aloof about many of their neighbors: countries that have gone further in loosening restrictions their citizens' political and civil rights.

In 2010, Myanmar held its first national elections in 20 years. It ended military rule and ushered in a civilian government in 2011. Earlier this year, Aung San Suu Kyi won a by-election for a seat in parliament. Thein Sein, during his visit to the U.S., told the BBC that he would accept Suu Kyi as Myanmar's leader as long as the people chose her in the 2015 election.

In nearby Vietnam, the National Assembly, which used to be considered a rubber-stamp legislature, has become more independent and outspoken in a series of moves. In June 2010 it rejected a Communist Party-backed plan to build a $56 billion high-speed rail project with Japanese backing, arguing that it would not serve the people, 70 percent of whom still live in rural areas.

Meanwhile, established democracies elsewhere in Asia have stepped up their efforts to promote freedom of expression. In late August, for example, South Korea's move to force its netizens to register their real names to post comments to the web was ruled unconstitutional on the grounds of protecting free speech behind anonymity.

It is against the brightening backdrop held up by China's neighbors that Beijing's suspicion and wariness of basic freedoms and rights seems anachronistic. The Global Times editorial is oddly reminiscent of Emperor Qianlong's reaction to the Macartney Mission in 1793. The British aimed to expand trade with the Qing Empire, but Lord Macartney's entreaties famously ended in failure because Qianlong found engagement with the rest of the world unnecessary. China, believed the emperor, possessed everything it needed in abundance, and, as such, it was unnecessary to "import the manufactures of outside barbarians." "Strange and costly objects do not interest me," Qianlong wrote in the letter he sent back to King George III.

China, these days, is buying "strange and costly" goods made in the West at a rapid clip and fast becoming the world's largest market for luxury handbags, haute couture, and top-of-the-line sports cars. But Qianlong's words still echo. As "strange and costly" as press freedom seems to China's censors, it may be unstoppable in the Middle Kingdom. Many Chinese even have found a reason for hope in spite of the shadow cast by the Global Times editorial on Myanmar's press reforms. Even the People's Daily Online posted on Weibo on August 20 a sentiment that appeared directly at odds with its sister paper, when it quoted a journalist in Yangon, Myanmar's former capital, saying — for all Chinese netizens to read — "Today is a great day for all journalists in Myanmar."

Bi Cheng is an MA candidate in Conference Interpretation at the Monterey Institute of International Studies. He has worked for China Economic Review and Modern Weekly and his current career goal is to become a professional conference interpreter.