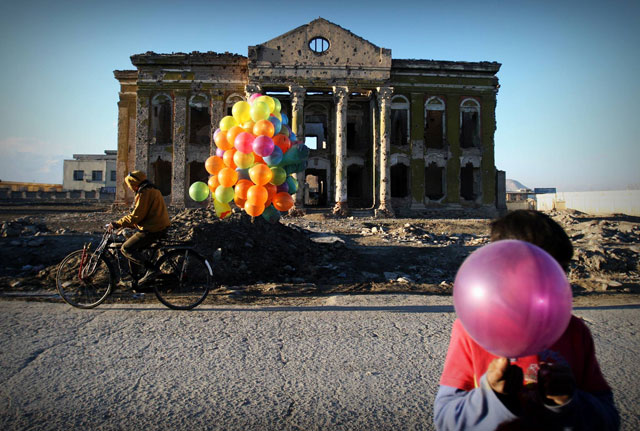 2014 marks the beginning of a new relationship between Afghanistan and the United States as American troops withdraw and President Hamid Karzai's successor is chosen. Both frontrunners in Afghanistan's presidential election, Dr. Abdullah Abdullah and Dr. Ashraf Ghani, have pledged to sign the Bilateral Security Agreement with the U.S. — a step Karzai has hitherto refused to take — if they secure majority votes from the election held on April 5. While hard-power policies are at the center of concern for the military transition, soft power, and cultural diplomacy in particular, also plays an important role toward building Afghan-U.S. bilateral relations.

From the 1950s through the '70s, cultural diplomacy expanded rapidly between the U.S. and Afghanistan, particularly from 1952, when hundreds of Afghan students were sent to the U.S. with the Fulbright program. Concurrently, a multilateral cultural agreement encouraged the flow of American archaeological expeditions and cultural research programs into Afghanistan; and in 1966, the exhibition Ancient Art from Afghanistan: Treasures of the Kabul Museum opened at Asia Society in New York, displaying recently discovered Buddhist, Hellenistic, Islamic, nomadic, and Persian artifacts. But in 1979 diplomatic ties were severed after the American Ambassador Adolph "Spike" Dubs was kidnapped and killed at the Kabul Hotel (the scene of the recent Taliban attack at the renamed Serena Hotel), and the Soviets invaded Afghanistan.

Since the overthrow of the Taliban in 2001, small steps have been made toward rebuilding Afghan-U.S. cultural relations. The Fulbright program was restarted in 2003, sending hundreds of Afghans to U.S. universities to date, which recently included a PhD exchange. In 2008-09, the country's ancient antiquities went on tour in the U.S. in the exhibition Afghanistan: Hidden Treasures from the National Museum, Kabul, aweing American audiences as they did half a century ago. In 2012 the U.S. announced plans to build a new, state-of-the-art National Museum intended to house the country's prized collections.

This year, a month before Afghanistan's presidential election, the exhibition Art Amongst War: Visual Culture in Afghanistan, 1979-2014 opened at the College of New Jersey (TCNJ) in Trenton. Running through the end of this week, the exhibition showcases a diverse collection of contemporary works by a range of Afghan artists varying in age, ethnicity, and gender, and includes calligraphy, embroidery, Persian miniatures, photography, and war carpets. One particular work stands out for its timeliness: an interactive voting booth by the artist Mariam Ghani, the daughter of presidential candidate Ashraf Ghani.

TCNJ Associate Professor of Art History and exhibition curator Dr. Deborah Hutton observes: "It's a great way [for artists] to preserve their heritage while moving forward as a modern country and building economically. As one of the photographers said, ‘in a country with a huge illiteracy rate, the visual becomes really important, and so it can be a way of building a national identity and moving forward. Photography is a way of making people aware of what's going on.'"

The exhibition also encourages stateside museum-goers to redefine their perceptions of Afghanistan. Hutton notes: "At the beginning of my class…I had all of my students write down the first five words that came to mind of Afghanistan and I had them go out and interview five people, then we tabulated them. The main words of course are exactly the words you can imagine: Taliban, destruction, death, war, oppression of women — but very little specifics about their culture and country. Even though we've been militarily engaged with [Afghans] the average American knows very little about them."

The exchange of ideas highlighted in the Art Amongst War exhibition is particularly important to the young generation of Afghans who comprise two-thirds of the national population. Dubbed "Generation America" by the media, they are not only a generation who grew up amid the American military presence; they are also one influenced by more than a decade of exposure to American culture through media, arts programs, educational exchanges, and language training.

Yet despite the advances in bilateral relations over the past 13 years, many Afghans are worried that 2014 will repeat the events of 1989, when "America forgot about Afghanistan" after the defeat of the Soviets. Three years later, in 1992, the country was locked in a bloody civil war between the Mujahideen factions, which paved the way for the Taliban movement. Thus, the continued expansion of cultural diplomacy in and with Afghanistan sends the message, particularly to the young generation, that the U.S. isn't about to forget them. Instead, it signals that 2014 is the start of a long-term alliance with Afghanistan built on an exchange of ideas and values.

Joanie Eva Meharry has conducted fieldwork on Afghanistan's culture and politics with fellowships from the American Institute of Afghanistan Studies at Boston University in 2012 and the Global Heritage Fund in 2011.