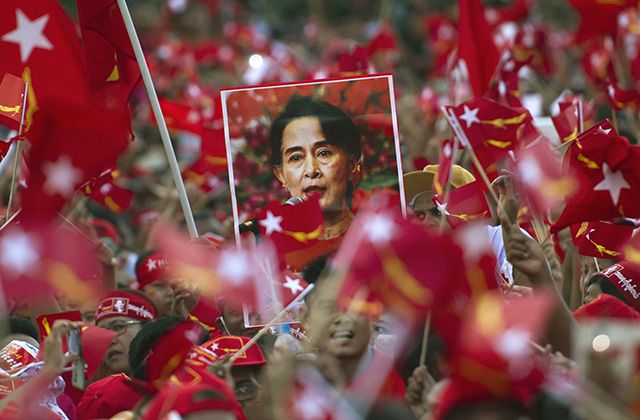 Supporters of Aung San Suu Kyi hold posters bearing her image as they listen to her speak during a campaign rally for the National League for Democracy in Yangon on November 1, 2015. (Ye Aung Thu/AFP/Getty Images)

On September 21, 2016, Aung San Suu Kyi will speak at Asia Society in New York. The event will be live-broadcast.Learn more

For five decades, Myanmar (also known as Burma) languished under a hardline military junta, with most people living in poverty and any hint of dissent quickly stomped out. But in 2008, a new constitution set in motion a profound set of changes. Then this November, it culminated with something that's long seemed impossible: free and peaceful elections that allowed long-time political prisoner Aung San Suu Kyi's opposition party to take power.

In this fourth episode of the Asia Society Podcast, we trace Myanmar's "bumpy zig-zag road" to reform and explore what lies ahead for the nascent democracy. We hear from former Chief of Mission to the U.S. Embassy in Myanmar Priscilla Clapp, Chairman of the Yangon Heritage Trust Thant Myint-U, Executive Director of the Asia Society Policy Institute Debra Eisenman, Asia Society Executive Vice President Tom Nagorski, and former Viacom CEO Tom Freston.