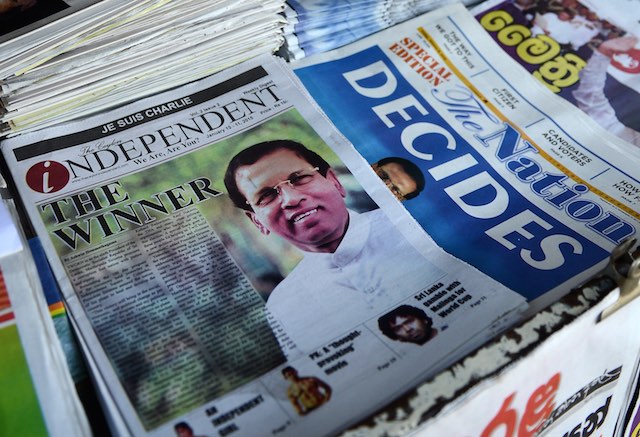 Newspapers for sale at a stall in Colombo on January 10, 2015, leading with headlines about Sri Lanka's new president Maithripala Sirisena. (Akruwan Wanniarachchi/AFP/Getty Images)

Last week the nearly decade-long rule of Sri Lankan President Mahinda Rajapaksa came to an end in what's being called "a startling upset."

Rajapaksa has been widely condemned for turning his presidency into a dictatorship through self-serving constitutional amendments and curtailments on judicial independence, press freedom and dissent. Nevertheless, in the months leading up to last week's election, Rajapaksa enjoyed significant popularity on the back of his role in ending the country's 26-year civil war in 2009 and overseeing a steadily growing economy. With no serious political challengers apparent, Rajapaksa was emboldened to call for elections two years earlier than he was required to.

However, a serious challenger did emerge with Maithripala Sirisena. The former health minister, who defected from Rajapaksa's own party in order to challenge him, ran on a platform of curbing the powers of the presidency and restoring Sri Lanka's democracy. In spite of alleged attempts by Rajapaksa's camp to suppress vote counting, Sirisena ultimately defied expectations and prevailed with a 51-to-47 percent victory.

In an op-ed for the Colombo Telegraph this weekend, Sri Lanka-based lawyer and Asia Society Asia 21 Young Leader Viran Corea describes what the country's leadership must now do to continue the country's legal and economic development.

At the presidential election, a majority of the citizenry arguably demanded greater rights and protections against abuses and corruption by the executive. In a democratic republic, the judiciary is the main organ of government tasked with the balancing of competing or conflicting rights, where disputes arise between the executive and a citizen. In the absence of a credible judiciary, no durable stability or security is possible in any society. Therefore, urgent measures are required to properly evaluate the judicial role. This evaluation must be made, with due cognizance of the need for robust economic development, for Sri Lanka to assume her due place in Asia and the community of nations.

In this context, any meaningful discourse on the role and requirements for the judiciary in Sri Lanka today, should adequately focus on the merits or otherwise of the subservience of fundamental human freedoms, to make way for strong executive government in the context of a post armed-conflict scenario, with focus on economic and infrastructural development needs. It is beyond doubt that individual rights must at times give way to the greater needs of the country. However, this must be within certain limits, with real, adequate checks and controls to ensure balance and prevent abuse and excesses. In a democratic socialist republic, the role of properly construing and upholding such limits with certainty, thereby acting as a check or control falls upon the judiciary. The health of a judiciary is inferable from its ability to do so.