When Will Sri Lanka End Its Silence? | Asia Society Skip to main content

When Will Sri Lanka End Its Silence? 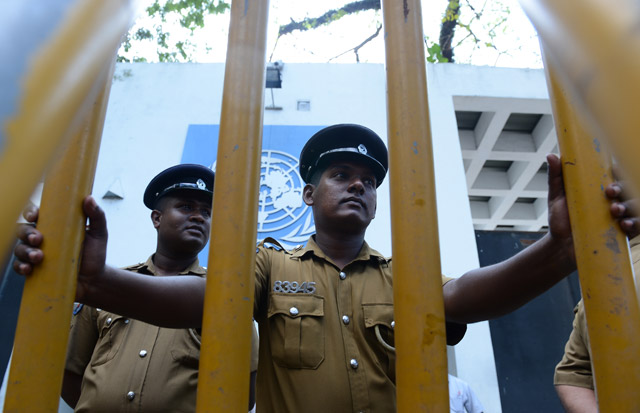 Sri Lankan policemen look on as Tamil pro-government activists take part in a demonstration outside the UN offices in Colombo on March 10, 2014, to protest a proposed US-led UN resolution to investigate Sri Lanka for alleged war crimes. (Lakruwan Wanniarachchi/AFP/Getty Images)

When Sri Lanka’s three-decade-long civil war ended in 2009, its government and the United Nations Secretary General issued a joint statement agreeing to take steps to alleviate the humanitarian crisis in the country’s war ravaged north and east and to improve human rights and accountability across the country. Now, nearly five years later, the Sri Lanka government continues to ask for more time to take action, while at the same time insisting that it has already done everything humanly possible to address these concerns.

On the surface, the end of the war ushered in a return to normalcy in the north and east: Large swaths of land have been rid of explosive mines enabling thousands to return to their areas of origin. In September 2013, the Northern Provincial Council (NPC) elections were held, seeming to fulfill promises for greater devolution of power. Meanwhile, there is a boom in tourism and construction across the country.

Yet the government’s loftier and more consequential promises remain unfulfilled. This is the silence of Sri Lanka — and now is the time for action.

In December 2011, the government issued its Lessons Learnt and Reconciliation Commission (LLRC) report, providing a crucial starting point for national reconciliation, and in July 2012 it released a National Action Plan, laying out specific timeframes and assigning ministries for the LLRC report’s implementation. More than two years after the LLRC report and 20 months after the National Action Plan was first made public, however, many of the report’s recommendations still await full implementation. Crucial legislation like the Witness and Victim Protection bill has yet to be introduced, and even modest reforms like singing the national anthem in both Sinhala and Tamil remain on the shelf.

The United Nations Human Rights Council (UNHRC) has taken notice, adopting resolutions in March 2012 and 2013 pressing the government to investigate violations during the final stages of the war, and last August the UN High Commissioner for Human Rights toured the country and noted that it was moving toward an authoritarian system, confirming reports of ongoing human rights violations and a culture of impunity.

Indeed, a year after the first female chief justice was speedily impeached, independent institutions are politicized and increasingly paralyzed; promises to introduce reform are made regularly with no follow up; religious minorities have come under increasing attacks and gender-based violence and disappearances continue.

Despite the government’s protestations, the UN is continuing to press President Mahinda Rajapaksa’s government to uphold its promises. In her most recent report issued on February 24, 2014, the high commissioner recommended the establishment of an international inquiry mechanism to investigate alleged violations of international human rights and humanitarian law and to monitor domestic accountability processes.

Meanwhile, the United States and four other members of the UN tabled a draft resolution putting pressure on Sri Lanka. It is paramount that the UNHRC takes note of the lack of demonstrable progress in the last several years and adopts a resolution that calls for international independent investigations and the monitoring of ongoing violations.

All of these are necessary steps to ensure that the government makes genuine efforts towards true reconciliation and accountability. Sri Lanka’s silence needs to stop.

Bhavani Fonseka is senior researcher at the Centre for Policy Initiatives in Sri Lanka. She's an Asia 21 Fellow.
@bfonseka