The 'Bleak' State of Rule of Law in Sri Lanka 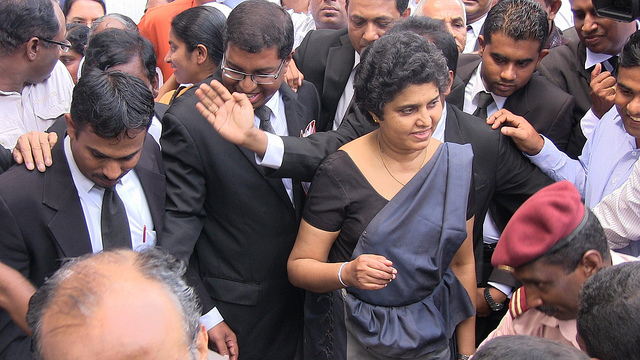 Today, the 65th National Day of Sri Lanka, offers a moment to reflect on achievements since independence. Although more than three years have passed since the end of the war in 2009, prospects for justice, peace and reconciliation continue to elude the tiny island in South Asia. More recent developments highlight the crises in the rule of law sphere, which, if not addressed, can immediately have a chilling effect on hopes for a functioning democracy and sustainable peace in Sri Lanka.

The turbulent last months of 2012 witnessed a rise in threats and attacks against the judiciary, culminating with the impeachment last month of the 43rd chief justice of Sri Lanka, Dr. Shirani Bandaranayake, in a campaign widely considered as a political vendetta by the ruling government. The impeachment was seen as a direct result of an order given by a bench headed by Bandaranayake on the constitutionality of the Divineguma Bill, which was introduced by President Mahinda Rajapaksa’s younger brother Basil Rajapaksa, the powerful minister for economic development. The motion was handed over to the speaker, Chamal Rajapaksa, elder brother of the president, on November 1, 2012. Soon after, the Supreme Court ruled against the bill, and with it saw a most efficient and speedy trial of the chief justice.

A Parliamentary Select Committee (PSC) was established soon after and found Bandaranayake guilty of three of the 14 charges, but the process itself has been widely criticized nationally and internationally. The chief justice and her lawyers walked out of the proceedings due to several reasons, including not being provided sufficient time to respond to the charges and being unable to call witnesses. The demeaning nature with which a sitting chief justice was treated was demonstrated when ministers, members of the PSC, started heckling the Bandaranayake during proceedings. The lack of due process within the PSC was further confirmed when the four opposition members of the PSC walked out of proceedings, and soon after, the chief justice and her legal team walked out.

Protests against the impeachment were seen across Sri Lanka. Protests and boycotting of courts by lawyers were seen in late 2012 and in January 2013, some ending in violence when peaceful protesters were attacked by thugs. The Bar Association of Sri Lanka, in a strongly worded statement issued in December 2012, criticized the impeachment process and refused to recognize an appointment that was a result of a flawed process. In a ruling on January 3, the Supreme Court held the impeachment process not in adherence to the Constitution, calling into question the legality of the PSC and thereby raising questions of its standing and findings.

Despite the mounting protests and the likelihood of a constitutional crisis, there was no stopping government plans to impeach Bandaranayake. The findings of the PSC were debated in Parliament January 10-11, and a vote of 155 to 49 passed in favor of the impeachment, cementing the fate of the first female chief justice in Sri Lanka. Within 24 hours, the president had signed the impeachment papers. Soon after, Mohan Peiris, former attorney general and a loyalist of the Rajapakse family, was appointed by the president as the next chief justice.

This dreadful saga is the most recent in a string of devastating attacks against an ailing judiciary and a reminder of the many opportunities lost to reform and reconcile in postwar Sri Lanka. Although the government is quick to claim that progress has been made since the end of the war with the reduction of the number of internally displaced persons and construction of infrastructure, genuine problems persist among the people of Sri Lanka.

The lack of demonstrable progress resulted in the United Nations Human Rights Council (UNHRC) adopting a resolution in March 2012 calling for the full implementation of the government’s own Lessons Learnt and Reconciliation Commission (LLRC), a move supported by a cross-section of states, including the United States and India. In March 2013, Sri Lanka will be taken up again in the UNHRC. The United States last week discussed a move to present another resolution on Sri Lanka, a damning sign of the lack of progress on the ground.

The Commonwealth Secretariat has also raised concerns in recent weeks regarding the deterioration of the rule of law. This is an area to watch, with growing global criticism on the prospect of Sri Lanka hosting the Commonwealth Heads of Government Meeting in November 2013. Most recently, the International Commission of Jurists and over 50 eminent justices and lawyers from across the world issued a letter critiquing the impeachment, with many signatories to the letter emanating from the Commonwealth and the South, dispelling government claims of a Western conspiracy.

The reality is bleak, but not all is lost. There is still room for the government to respect the Constitution of Sri Lanka, adhere to rulings of its Supreme Court and implement the findings of its own LLRC and other commissions. It is incumbent on the government to demonstrate it has the political will to implement its own promises and pledges and take steps to respect, protect and promote human rights and the rule of law. The question, though, is whether or not the government is genuinely interested in democratic reform, peace and reconciliation.

Bhavani Fonseka is senior researcher at the Centre for Policy Initiatives in Sri Lanka. She's an Asia 21 Fellow.
@bfonseka