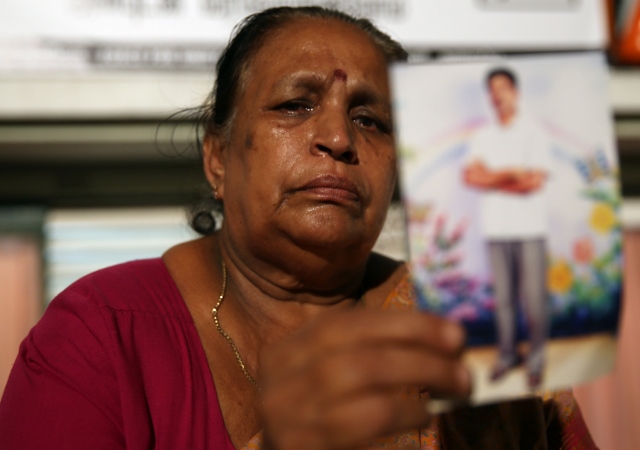 Tangaraja Rajeshwari, 58, a woman belonging to the Sri Lankan minority Tamil ethnic group, holds up a photo of her son, who disappeared during the final stage of the Sri Lankan civil war, during a human rights protest festival on November 13, 2013 in Colombo, Sri Lanka. (Buddhika Weerasinghe/Getty Images)

Nearly six years after the end of a 26-year civil war with Tamil insurgents, Sri Lanka remains divided over how to prosecute human rights abuses and possible war crimes committed between 1983 and 2009. A 2011 United Nations report estimated that as many as 40,000 Tamil civilians were killed in the last months of the civil war.

While Sirisena has not revealed plans to open prosecutions, it is thought he is more likely to do so than his predecessor Mahinda Rajapaksa, who presided over the end of the war. In July 2014, Rajapaksa adamantly refused to cooperate with a separate U.N. investigation.

In an in-depth analysis for Groundviews, Fonseka outlines a possible road map for Sirisena’s administration to pursue “truth and justice.” She writes:

…The Sirisena Government must demonstrate a shift in policy in terms of recognizing the past and addressing ongoing violations. The Rajapaksa Government attempted to demonstrate that economic development was a panacea, with little attention given to other grievances of communities across Sri Lanka. The Sirisena Government should note the flaws of such a line and acknowledge the legitimate grievances of communities in the North, East and South of Sri Lanka. The large turnout in the North on election day, despite intimidation and attempts to confuse voters, is a testament to the rejection of the previous Government’s policies and the desire for change. “We voted to get back our dignity back”, a quote from a person in the North reported in the media, goes to the heart of the problem. The development, urbanization, and beautification initiatives of the past few years do not make up for concurrent violations of people’s rights, including evicting them from their own homes or preventing return to their own lands. Respecting people’s rights and dignity is of paramount importance to changing the country’s political culture. The present Government should take note of these basic issues when pushing forward with their 100-day plan and longer-term initiatives.