Advice for President-Elect Trump From Around Asia 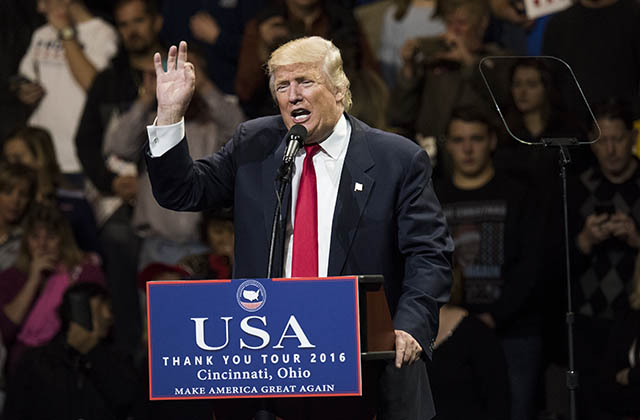 On December 13 in Washington, D.C., the Asia Society Policy Institute will launch its briefing book, Advice for the 45th U.S. President: Opinions from Across the Pacific, with a panel discussion including Kevin Rudd, Wendy Cutler, Ashok Mirpuri, and Ahn Ho-young. Learn more

Donald Trump's surprise win in the U.S. presidential election last month has left leaders throughout the world on edge about what this shift in American leadership will mean for their countries. This is particularly true in Asia, where many countries received mixed signals from Trump during his campaign on how he intends to approach regional trade, security issues, and long-standing U.S. alliances in the region.

In a new briefing book titled Advice for the 45th U.S. President: Opinions from Across the Pacific, the Asia Society Policy Institute has compiled voices from a range of leaders throughout Asia expressing their hopes and advice for the incoming president. Below are excerpts from each contributor. The full briefing book will be released on December 13 with a launch event in Washington, D.C.

The two things that leaders in the Asia-Pacific region wish to hear and see from President Trump are an assurance that the United States will continue to provide and underwrite security in the Asia-Pacific and that it will remain a benign hegemon, opening its economy to friends and allies. Without this confidence, Asian leaders could turn to other expedients, and to China, for the prosperity and security they seek. The greatest strategic challenge confronting leaders in the region is whether the United States and China will be able to resolve their strategic competition and arrive at a new equilibrium peacefully. No Asia-Pacific country wants to have to choose between the United States and China. During the past two centuries, the United States has had a proven record in the region as a benign hegemon. China does not. But over the past decade, U.S. presence and attention have been sporadic, and since 2008, the U.S. willingness to open its markets and lead the economies of the region has been in question.

The post-war liberal international economic order, which the United States helped establish, has facilitated increased trade, investment, and technology flows and created strong interdependence between countries in the region. All of us — the United States, Japan, and others — have benefited greatly from this order. None of this prosperity would have been possible without the peace and stability the U.S. presence has provided. This is why regional countries are now so concerned about potential shifts in U.S. foreign policy under a new administration. The Trump team could help to reduce uncertainty for its regional partners by imparting a message of “continuity.” Asian partners are waiting to hear that the mutually beneficial relationships we have enjoyed with the United States for many years — relationships that are based on interdependence and respect — will continue and hopefully be strengthened further.

A fundamental and urgent issue for leaders in both Washington and Beijing is how to reduce strategic distrust. A popular view among Chinese political elites is that the United States intends to undermine Chinese Communist Party leadership by supporting dissidents, spreading American ideology in Chinese society, and encouraging pro-independence or separatist tendencies in Taiwan, Hong Kong, Tibet, and Xinjiang. Another strong belief in China is that the United States is working to contain China internationally by consolidating U.S. security alliances and military arrangements and involving itself in territorial disputes between China and some neighboring countries. ... On the U.S. side, many are suspicious that today’s China, with enhanced power and strong leadership, will try to reshape the current world order that has by-and-large served U.S. interests and goals thus far. … These mutual suspicions are real and have served to intensify the strategic competition between the two countries. However, we should not let them overshadow the common interests the two countries share.

The post-World War II global economic order, whose creation was led by the United States, is based on open markets, free trade, and the free movement of capital. However, as we have witnessed during the recent U.S. electoral cycle, trade has become an easy but misplaced target for those angered by the ill effects of globalization. Research has proved that job losses and wage stagnation have been driven primarily by technological changes and domestic policy choices, not by trade liberalization. If trade becomes a scapegoat for all of globalization’s challenges, nations risk forfeiting a powerful tool for growth and needed economic reform. It is therefore imperative that the United States leads in making a stronger and more effective case for the value of international trade. The United States built its economy on the promise of open trade and global engagement; It must stand together with Asians to help them do the same.

While the Philippines has been more open and dramatic about the switch in its orientation and mindset, in reality, some ASEAN states have been realigning toward China in differing degrees for quite some time. Cambodia and Laos, and to some extent Thailand, Brunei, and Malaysia, have all moved into the Chinese orbit without fanfare. Yet it would be wrong to believe that most ASEAN countries are only interested in one set of relationships. In fact, given their economic, trade, and cultural ties, ASEAN countries want to engage with all the major powers in the world, and in particular to enjoy good relationships with both the United States and China. And they also want the United States and China to enjoy good relations with each other. ASEAN understands that better relations between the United States and China makes life easier for the smaller and middle-sized countries in Asia. With this as background and bearing in mind the election rhetoric and the inward-looking and protectionist mood of the U.S. electorate, it is crucial that the first message Asian countries hear from President-elect Trump is one of continuity, emphasizing that the United States means to stay in Asia, that U.S. engagement with Asia and ASEAN will remain unchanged, and that America's word is good.

The new Trump administration faces three challenges. It needs to reassure jittery allies of the U.S. commitment to Asia by increasing its diplomatic and military presence. New secretaries of state and defense should expect to log many air miles to the region, overcoming local worries that the U.S. underestimates the region's big strategic challenges and is too focused on the intractable Middle East. Second, the new administration must craft new language expressing America’s priorities and purpose in Asia. This must replace the Obama's administration's rather haphazard use of "pivot" and "rebalance" to describe its Asia policy. In practice, neither term was credibly enacted. The Trans-Pacific Partnership trade deal languishes and several promised military enhancements have been delayed. Finally, the administration should lift its expectations of its partners. American resentment of allies’ free-riding on the coat tails of U.S. defense spending is justified. If allies want the confidence of America's steady hand shaping Asian security, Washington should be clear about what it wants in return. The alliances will work better if all parties lift their expectations of the resources and defense cooperation needed.

The United States can help Asian countries promote energy efficiency and cleaner energy development. This can be done by supporting Asian countries’ strategic efforts to increase the share of cleaner energy sources such as natural gas, nuclear power, and renewable energy. ... But it is also important for the United States to have a better understanding of the energy reality in Asia, namely the reality that coal is likely to remain a key component of Asia’s energy mix for the foreseeable future. In this context, wider use of clean-coal technologies should be an important part of Asian energy policies. With better understanding of this reality, the United States can be an important research, development, and trade partner with Asian countries to promote cleaner coal use while supporting their efforts to reduce coal dependence.

Indians like the United States of America. More specifically, young Indians like the United States. According to a June 2016 survey by the Pew Research Center, 49 percent of Indians older than age 50 have a favorable view of the United States. When you look at Indians between ages 18 and 34, however, a considerably larger proportion (61 percent) hold positive views. This generational difference in perceptions of the United States — a 12 percentage point gap between the old and young — is one of the largest such divergences in the world right now. The gap is made all the more important given that most Indians are quite young; half of the population is younger than age 27. The data represents a trend: more and more young Indians admire the United States. They seem to sense the shared values of democracy, freedom, and entrepreneurship. When they can, these young Indians vote with their feet: 132,888 Indian students were enrolled in U.S. schools and colleges in 2015. When they can, many of them stay on to build their own versions of the American dream, even while maintaining strong links to the land of their birth. American soft power is alive and well in India.

During the U.S. presidential campaign, President-elect Trump argued that global efforts to address climate change, such as the Paris Climate Agreement, were a “bad deal” that posed an unnecessary burden for business. Although he initially indicated he could withdraw from the Paris Agreement, he has more recently suggested that he has an open mind. I would urge him to reconsider his opposition to climate change cooperation. As more than 300 U.S. businesses recently argued in an open letter, failing to invest in a more energy-efficient and green future will be a “bad deal” for long-term U.S. interests. … The overwhelming majority of countries on the planet are marching on toward a more green and sustainable economy. Ultimately, U.S. businesses and the economy will lose by disengaging from this progress. And, in turn, U.S. disengagement means that everyone loses — even China is warning the United States against abandoning the Paris Agreement.