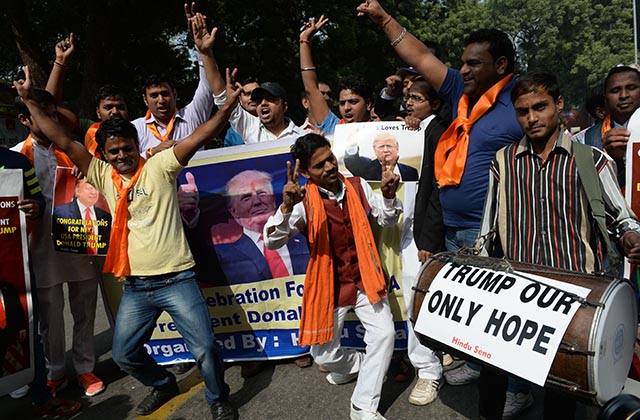 President-elect Donald Trump has offered few concrete policy proposals about how he would approach South Asia. With an improbable victory sealed and inauguration less than two months away, his team of advisors will need to put together a vision for the region. Until then, Indian leaders, much like the rest of the world, will be held in suspense. Will Trump stay the course on the Obama administration’s policies in the region? Or will he chart a new path?

A few of Trump’s campaign statements about India and the region could offer a window into his approach. His foreign policy vision can also help us guess what a Trump administration might mean for India. Here are three critical questions going forward:

Can Trump Replicate the Obama-Modi Partnership?

President Barack Obama and Indian Prime Minister Narendra Modi shared a connection and invested tremendous amounts of time and political capital to improve the bilateral relationship. There is no reason that Trump and Modi can’t find similar success. Trump has called Modi a “great man” and has repeatedly expressed an interest in working closely with India. He said that “there won’t be any relationship more important to us” than the one with India. This could suggest that Trump might make an overture to Modi early in his time in office. To date, however, this has not happened, in spite of the president-elect’s initial outreach to other world leaders.

See more Asia Society coverage of Donald Trump and his potential influence on the countries of Asia.Learn more

Modi will be glad that a Trump administration will likely pressure him less on India’s domestic policies. Having praised Russian President Vladimir Putin for his “strong leadership” during the campaign, it would be unexpected for Trump to needle world leaders about human rights violations, religious intolerance, and media suppression to the extent that President Obama did, or as much as Hillary Clinton might have. Donald Trump may well prefer maintaining friendship over principle, which could work to Modi’s liking. There could be bumps along the road, however.

If Trump pursues the kind of isolationist “America First” foreign policy he sometimes hinted at during the campaign, it would raise doubts in the minds of Indian leaders about whether the United States can be a reliable partner, especially in Asia. Some of Trump’s views will directly undermine India’s interests and the cooperation Modi secured with Obama. For instance, climate and energy cooperation were top priorities for Obama and Modi. What happens to that legacy if Trump backs away from those commitments and rejects the Paris agreement, as is expected? That would not be looked upon lightly by Modi, who, for the sake of his relationship with Obama, invested considerable political capital in a more forward-thinking stance on climate change and clean energy.

Trump criticized Asian economies like China, Japan, and Korea for cheating the U.S. through currency manipulation or bad trade practices. India was one of the few countries that escaped his wrath. However, India will not escape the negative impacts of the trade policies Trump proposed during the campaign. In 2015, India had a positive goods trade balance of $23 billion with the United States. That number will diminish if the U.S. erects trade walls. Just as India is set to benefit from greater integration with the global economy, Trump’s actions could depress already sluggish global trade and growth. After growing at a steady pace from 2000 to 2013, bilateral trade has been stagnant in recent years. That might continue under President Trump.

India could also face a confrontation with the U.S. if Trump seeks to reduce temporary work visas. Trump criticized the U.S. H-1B non-immigrant specialty worker visa program during the campaign, saying it “decimate[s]” American jobs. The Indian government has long sought more H-1B visas for its citizens, who are already the greatest recipients of them. If President Trump keeps his promise to reduce H1-Bs, India would likely see fewer of its citizens coming to work in the United States, putting its IT companies under greater pressure.

Such a dispute would certainly also complicate economic cooperation in other areas. And it could generate animosity toward the administration among Indian-Americans — an increasingly important domestic constituency.

Trump has made some controversial statements about India-Pakistan relations, which if translated into policy could be very damaging to U.S.-India ties. Last month, stating that he would be open to being a “mediator or arbitrator” between India and Pakistan on Kashmir, Trump contradicted U.S. policy and suggested something that is anathema to India, which rejects international interference on the Kashmir issue. On the other hand, earlier in the campaign, Trump’s comments criticizing Pakistan over its support of terrorism delighted many Indians.

Trump also described India as a means of keeping Pakistan in check. When asked about how he would handle a crisis in Pakistan, he said, “You have to get India involved. ... They seem to be the real check. ... I think we have to deal very closely with India to deal with [Pakistan].”

Such comments earned Trump praise from Indians who have long soured on U.S. support of their neighbor. If Trump does present Pakistan with an ultimatum, it would either have to change its tack or the U.S. would have to pull aid from the country, which would leave the United States with very little leverage.

Giving India a freer hand could create its own problems. Historically, the United States has intervened diplomatically during crises between India and Pakistan. For instance, asking India to exercise restraint after a terrorist attack emanating from Pakistan has become a tired U.S. talking point. If the U.S. does not pressure India and lets it “deal with Pakistan,” as Trump suggested, tensions could escalate beyond any point we’ve seen since the two countries attained nuclear weapons — a very dangerous development for U.S. interests in the region. This is especially true after Modi’s decision to counter the most recent terrorist attack on Indian soil with surgical strikes in Pakistan that India publicly acknowledged. India’s action deviated from a long standing pattern of choosing not to retaliate militarily across the "line-of-control" or keeping mum if it does so. An escalation between the two nuclear rivals could become far more likely given Mr. Modi’s more muscular stance toward Pakistan. This would pose serious challenges to the ability of the U.S. to manage a crisis in South Asia.

Finally, Trump’s policies on Afghanistan could have a major impact on regional stability. He has repeatedly said that the United States is involved in wars it has no business in and that he is against “nation building.” Though he has not presented a clear vision on Afghanistan, his election creates uncertainty about whether the U.S. will continue its support of the Afghan unity government, which is struggling politically and economically, and is increasingly under attack from the Taliban.

If Trump scales back American military and economic support for Afghanistan’s government, the country is likely to descend further into chaos. India, which has consistently urged the United States to maintain its presence in Afghanistan, would be loath to see this happen.

Ultimately, even if Trump and Modi are able to craft a friendly working relationship, Trump’s policies as president will determine whether he will be good for India and U.S.-India relations. The U.S.-India bilateral relationship had been on a solid trajectory since the turn of the century. The Trump administration will certainly attempt to build on that progress. Whether it will succeed remains an open question.