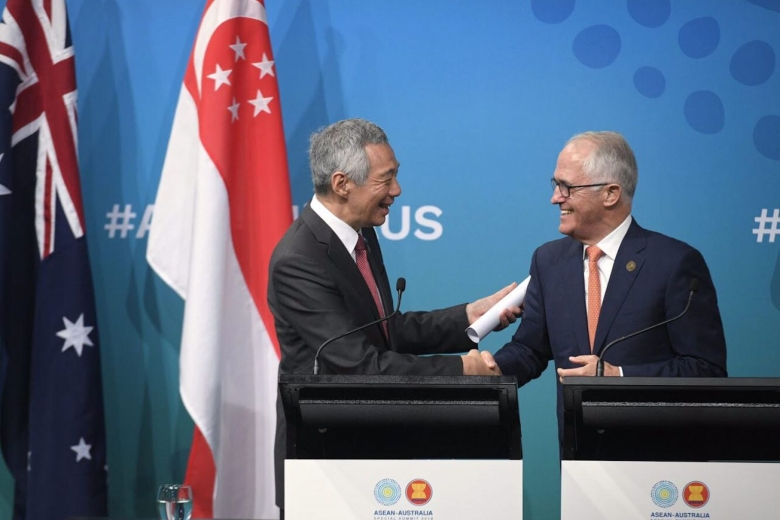 It might be longer than the last bilateral leadership meeting statement, but the Sydney Declaration has also subtly taken Australia’s relationship with its closest Asian neighbours into new territory after a diverse week of engagement from soccer to social entrepreneurs.

The official communique from Australia’s special summit with Association of Southeast Asian Nations leaders contains about 25% more words than the first biennial leadership summit in 2016 in Laos where Prime Minister Malcolm Turnbull invited his fellow leaders to Sydney. But, at five pages, it is a breath of fresh air compared with the 28-page statement the ASEAN leaders released at their own summit last year. Here are the key takeaways.

Regional security: The statement contains the same core words as 2016 on non-militarisation in the South China Sea, the need to abide by the United Nations Convention on the Law of the Sea and the need for a Code of Conduct.   Not surprisingly, the view expounded by Singapore Prime Minister Lee Hsien Long that it will take a long time to sort out the tensions with China over territory has prevailed over Australia’s occasionally more strident tone towards China in the past year. But the statement does try to draw China further into the existing rules-based order by urging respect for practices of the International Civil Aviation Organisation and the International Maritime Organisation. These points were not included in ASEAN’s own leaders’ statement last November. And the management of the South China Sea is subsidiary to heightened concerns about terrorism (see below) and the Korean peninsula.  In 2016 terrorism was bracketed more with a range of new security issues such as piracy and drug trafficking.

Infrastructure: This really didn’t feature in 2016 despite the existence of China’s Belt and Road Initiative (BRI), but now the statement recognises “the critical role of quality, sustainable and transparent infrastructure development, facilitating access to finance.” This is subtle language in the context of recent actions from the US and Japan to build an additional infrastructure development pathway for regional countries to the BRI approach. The statement bundles this approach with the need for “smart and sustainable urban planning in our growing cities in improving economic growth and integration in our region.” Australia has announced $30 million over five years in funding for helping urban development and a broader initiative to help ASEAN countries develop a pipeline of infrastructure projects. These two actions are the first moves by Australia to quietly join the Japanese push to craft an alternative infrastructure offering to BRI which could create some competitive tension for Southeast Asian countries.

International trade: Consistent with the uncertainty created by the Trump Administration, this statement contains a blunt defence of the “rules-based multilateral trading system” and resistance to all forms of protectionism which wasn’t considered necessary back in 2016. Both Turnbull and ASEAN chairman Lee Hsien Loong made strong criticism of protectionism in their media conference which can be interpreted as criticism of the Trump Administration’s interventionist approach to trade. But there is no suggestion of unified action in the World Trade Organisation as has been suggested by some commentators.

Regional trade: Not a lot of change here with similar language on the slow moving Regional Comprehensive Economic Partnership (RCEP) despite positive talk on the sidelines from Australian ministers. There is a new reference to “effective review” of non-tariff measures in the review of the ASEAN-Australia-NZ Free Trade Agreement (AANZFTA) which would be good if it really happens.  The interesting movement from 2016 is the support for greater communication between peak business groups in ASEAN and Australia which was already an important sideline feature of the past week. Not surprisingly cyber technology and digital trade are a noticeable addition compared with 2016 consistent with the prominent role digital trade has played in the business sessions.

Joining ASEAN: It is no surprise that this idea, given an unexpected kick along by President Joko Widodo in Fairfax Media interviews, made no appearance in the communique. But it does include an interesting reference to “strengthening sub-regional cooperation frameworks as test beds to accelerate the development and implementation of ASEAN agreements” which may give Australia scope to pursue further institutional integration with ASEAN. This is an old theme stretching back to musty ideas like BIMP-EAGA (the Brunei Indonesia Malaysia Philippines East ASEAN Growth Area) but remains a way for Australia to pursue integration without the risks of actually trying to join ASEAN. Amongst the more interesting modern ideas on the table are taking the Singapore Comprehensive Strategic Partnership in the direction of Australia’s relationship with New Zealand. Then there is the idea of a maritime community of interest built around Malaysia, Australia, NZ, Indonesia and Singapore – the so-called MANIS (or sweet in Indonesian).

Malaysian Prime Minister Najib Razak injected some unusual intra-ASEAN tension into the Summit’s flagship move to improve anti-terrorism cooperation by declaring that the expulsion of Rohingya people from Myanmar was creating a terrorist recruitment opportunity. Najib made the comment in his closing address as ASEAN representative at the end of the summit’s counter terrorism conference where he had been standing alongside Myanmar State Councillor Aung San Su Kyi. This warning got a noticeable dead bat from Singapore Lee Hsien Loong at the final summit press conference when he said he had no intelligence about terrorism risks arising from displaced Muslim Rohingya people.  And in a surprising comment Prime Minister Malcolm Turnbull said Philippines President Rodrigo Duterte was never coming to the summit although Duterte only announced he wasn’t coming two weeks ago and has been the recipient of substantial Australian counter-terrorism assistance in the past year.  Nevertheless, the Memorandum of Understanding on Co-operation to Counter International Terrorism provides Australia with a new platform for dealing with the return of radicals from the Middle East to this region. It embraces a package of measures including regulatory assistance to develop best practice counter-terrorism legislation and regional workshops on issues such as electronic evidence, financial intelligence and countering online radicalism.  This MOU followed AUSTRAC’s more directly practical Codeathon where teams competed to develop tools to monitor illicit money flows.

LAOS: LEADING FROM THE BACK

It’s probably no surprise that ASEAN’s smallest economy got its moment in the spotlight late in the summit week as many leaders were already on the way home on Sunday evening.  But it was still a strikingly heartfelt speech from Prime Minister Thongloun Sisoulith in the presence of Foreign Minister Julie Bishop about how Australia had turned his country from a land-locked to a land-linked country. Thongloun revealed he had been a negotiator on the Mekong River Friendship Bridge between Laos and Thailand built in early 1990s before he had visited Australia. But the importance of the bridge in bringing Laos into the modern economy was underlined by the way the prime minister spent much of his speech outlining his ambitions for series of more modern road and rail infrastructure and shared ports in Vietnam. Reflecting on Laos’ stature as ASEAN’s lone land-locked country, he said of the shared ports idea: “It might be a dream but maybe in the future we will turn the dream into reality.”  Thongloun said he had supported the Australia-ASEAN Special Summit since the day Bishop had raised it with him when he was foreign minister himself and he hoped there would be many more such meetings.

People to people relations is the sort of boilerplate material that usually pads out the final paragraphs of international summit communiques and it looked a bit that way with the Sydney Declaration.  But the mood on the ground at Sydney Opera House on Sunday evening was anything but padded-out as teachers and young entrepreneurs from Australia and ASEAN countries ended the week in a way that suggests real long-term links are being nurtured.  The teachers were part of the BRIDGE program, run by the Asia Education Foundation, which pairs Australian and ASEAN schools online and via teacher visits. The young entrepreneurs were taking part in the Australia-ASEAN Young Leaders Program (A2YLP) which brings a group of South East Asians to Australia to work on social entrepreneurial ventures. They pitch their ideas to judges today.  Both programs are funded by the Australia-ASEAN Council.  It is hard not to think the personal links forged on these visits – both within Southeast Asia and with Australians – will be lingering long after the Sydney Declaration.

Big beasts backroom presence: “The big beasts of Asia, the US and China, were naturally absent from the Sydney declaration. But the breath of the big beasts, as well as their tracks and their appetites, were constantly present.” - Graeme Dobell on The Strategist.

On the right track: “The US alliance was described recently as "Australia's strategic Plan A but also Plan B, C and D". This summit reveals a more imaginative strategy – and if Australia is to avoid becoming a lonely country in a less America-dominant Asia then our government is on the right track.” - Anthony Milner in The Australian Financial Review.

The real China challenge: “The question must surely be asked – if Australian business was prepared to enter China, why not ASEAN?” – Anna Green in Asia Society Australia’s Disruptive Asia.

Slow results are the norm: “The form is 95 per cent of the substance. Over time, that approach can yield big results, but they come incrementally, sometimes very, very slowly.” - Greg Sheridan in The Australian.

Unity test: “The sole test for ASEAN will be whether it can continue to prevent conflict among its members and their neighbours as this competition increases alongside their growing military capabilities.”  - Bradley Wood on Policy Forum.

Smart move: “The ASEAN initiative is a much smarter approach by actually drawing on Australia's expertise in infrastructure finance and structuring and its experience working within the many levels of Asian economic architecture.” – Greg Earl in The Australian Financial Review.

We hope you've enjoyed our ASEAN - Special Summit coverage over the last week. Briefing MONTHLY will revert to its monthly publication timeline following this edition.

Briefing MONTHLY is a public update with news and original analysis on Asia and Australia-Asia relations. As Australia debates its future in Asia, and the Australian media footprint in Asia continues to shrink, it is an opportune time to offer Australians at the forefront of Australia’s engagement with Asia a professionally edited, succinct and authoritative curation of the most relevant content on Asia and Australia-Asia relations. Focused on business, geopolitics, education and culture, Briefing MONTHLY is distinctly Australian and internationalist, highlighting trends, deals, visits, stories and events in our region that matter.